In today's piece about free agents on the Cleveland Browns, we look at another player who has the exclusive-rights free agent label, defensive end Emmanuel Stephens. 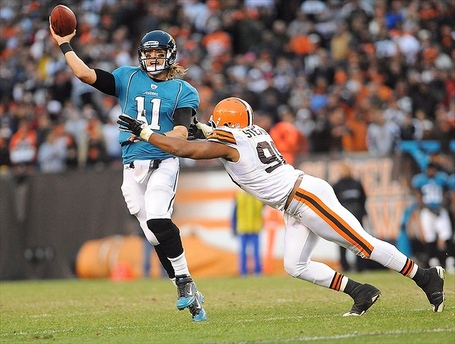 Defensive ends know it is a good day to pad your stats when you are facing Jacksonville's Blaine Gabbert. Credit: Eric P. Mull-USA TODAY Sports

How and When He Joined the Browns: Before the start of the 2011 season, the Browns claimed Stephens off waivers from the Atlanta Falcons, bringing a two-year deal with him.

Productivity Level Last Season: Smith was a backup defensive end last season for the first eight weeks of the season. He was Jabaal Sheard's backup, though, so he did not see a lot of snaps per game. When he did play, he was pretty effective as a pass rusher. He finished the year with 9 tackles, 1 sack, and 1 forced fumble, before going on the injured reserve in late October with a neck injury.

Why Keeping Him Could Make Sense: At 6-3, 255 pounds, Stephens has similar measurables as Sheard, who is expected to make a transition to outside linebacker when the team runs a 3-4 look. His pass-rushing abilities in limited time have to be at least somewhat enticing for coaches.

What the Browns Should Do: Stephens has been placed on injured reserve in each of the past two seasons, so durability is a concern with him. He doesn't have a lot, if any, NFL experience when it comes to dropping back into coverage. Because he is an ERFA, though, it would only cost Cleveland $555,000 to retain his rights, which is basically the minimum amount. That's pretty cheap for a guy who has shown some potential as a pass rusher; he's still relatively young at 26 years old, and can be evaluated in training camp.

Now it's your turn -- vote in the poll below on whether or not the team should give the minimum tender to Emmanuel Stephens!