Connelly: Quarterbacks and The Passes They Threw in 2012

Share All sharing options for: Connelly: Quarterbacks and The Passes They Threw in 2012

I won't take any credit for the data referenced in this piece. That belongs completely to Bill Connelly @SBN_BillC over at SB Nation Football Study Hall Blog. He orchestrated this statistical gem earlier this year - Quarterbacks and The Passes They Throw. He and his crew compiled their own Quarterback data throughout the 2012 NCAA season. Then they built some intriguing charts that compare all of this year's Quarterbacks adjusted completion statistics to go along with their passing frequency. This data provides a unique view and perspective into this year's prospects as well as next year's highly touted QB prospects. 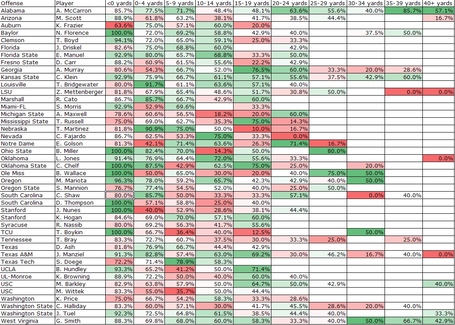 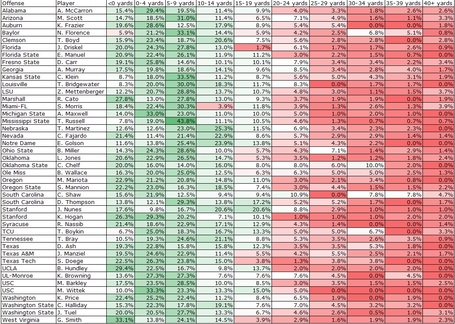 Aside from the information overload this data provides, once you weed through it all, the reason I love this analysis is because I believe it helps to support my take from earlier in the year where I advocate keeping Weeden, developing his tools, and seeing how he performs under Norv Turner and the new verticle system:

Is Weeden better than Geno, Nassib, Glennon or Barkley? I think that’s a tough debate, but what’s easy to wrap your head around is the fact that the 2014 draft will be stock piled with QB’s who are head and shoulders above this year’s talent and Brandon Weeden.

Then, if we're not sold on what he can bring to our immediate ability to win, we do whatever it takes to draft our franchise QB next year where several "franchise" guys will be up for grabs such as Teddy Bridgewater, Tajh Boyd and Johnny Manziel.

However, I can't deny that this data ( along with their film ) also builds a case for several other QB's in this year's draft with the obvious name being Geno Smith. The other QB that many have been really "down" on recently that this analysis shows as being a very productive, efficient and capable all around passer is Matt Barkley. Matt was a QB who many thought would be a Brown last year had he entered the draft and baring a trade down, he certainly could once again find himself in the mix for the Browns. The more I've looked at his film, the more I am impressed. I'm not saying I'm sold on the Browns considering him at 6, or even in a trade down, but he's certainly a better QB than most seem to be giving him credit for recently.

Mayock has been high on Barkley, and with Buffalo and the NY Jets in need of a QB, he could become a surprising 1st round target with Geno Smith, assumed to be off the board at that time:

Here's a recent interview with Mayock worth a look:

I realize these stats are just one small measure of talent and production but these are the guys who's film supports the statistics: Bridgewater, Boyd, Manziel, Barkley, Smith, among a few others. And I'm not saying I want the Browns to draft Barkley by including the tweets above, I'm just highlighting one of the positive trending players / a player who could be a legit target if the Browns decide to go QB in the first round and Smith is presumably off the board. All I'm saying is that the Browns haven't cemented their QB position yet and many of these guys could fill that need if Weeden doesn't emerge as the "guy".

Feel free to drop your thoughts and debate below.