In today's piece about free agents on the Cleveland Browns, we look at the team's lone free agent linebacker, Kaluka Maiava. 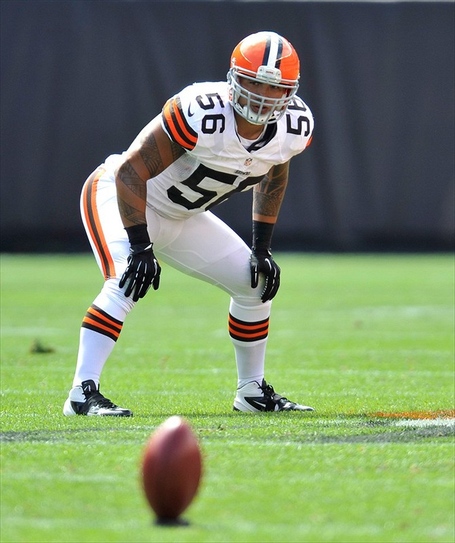 How and When He Joined the Browns: Maiava was a fourth-round pick by the Browns in 2009 and played under Rob Ryan in the 3-4 defense. His four-year rookie contract is now set to expire.

Productivity Level Last Season: Statistically, Maiava posted career highs across almost the entire board. He started 13 games (it was basically 16, but sometimes Cleveland heavily ran the nickel package), logging 53 tackles, 2 sacks, 3 passes defended, and 2 forced fumbles. It was not a standout season for Maiava, but you could also say that his production flew under-the-radar a little bit.

Why Keeping Him Could Make Sense: If you're looking for versatility, Maiava has a little bit of that. He was drafted by the Browns to be a 3-4 inside linebacker. He has played two years in that role, and also has two years of experience as a 4-3 outside linebacker. If he were retained, Maiava would move back to the inside in 3-4 sets to play alongside D'Qwell Jackson.

What the Browns Should Do: Meh. That pretty much sums up how I have felt about Maiava during his four-year career with the Browns. If he gets brought back, he shouldn't command too big of a contract, which I guess it a plus.

As it stands right now, the inside linebackers in the 3-4 look can be filled by D'Qwell Jackson, Chris Gocong, James-Michael Johnson, Craig Robertson, L.J. Fort, and Tank Carder. With all of those names in there, I don't see how Maiava was enough of a standout to be re-signed. It seems to make more sense for the Browns to either find a more impact free agent (who can play behind DQ), or see if any undrafted free agents shine in training camp. Aloha, Maiava.

Now it's your turn -- vote in the poll below on whether or not the team should re-sign Kaluka Maiava!