As we wind down our reviews of free agents on the Cleveland Browns, we'll look at one of our special teams aces, Ray Ventrone. 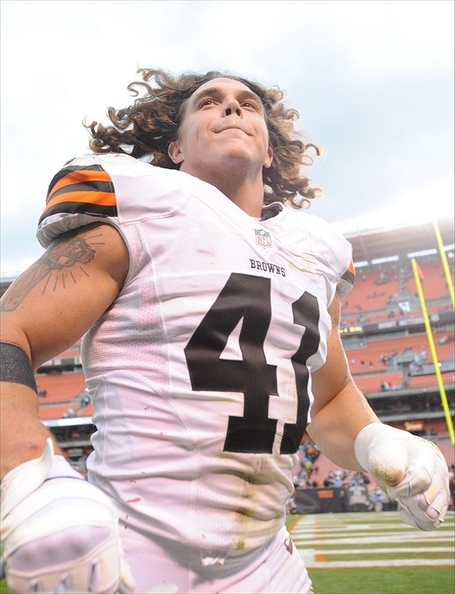 How and When He Joined the Browns: Did you know that Ventrone has been in the league since 2005? After a couple of brief stints between the Jets and the Patriots, Ventrone signed a one-year deal in 2009. During the 2010 offseason, the team re-signed him to a three-year deal worth $2.25 million.

Productivity Level Last Season: Although he was sometimes asked to play defense, Ventrone was signed to be a special teams ace, plain and simple. Last year, Ventrone's productivity was hurt by various injuries, as he only suited up for 12 games on the season. Because of that, he was tied for seventh on the team in special teams tackles with just four.

He also had a terrible game against the Lions in the preseason -- on one play, he botched the downing of a punt at the two yard line, and on another, he took out and injured cornerback Dimitri Patterson after taking a bad angle on a running back. Altogether, it was definitely not the best contract season for Ventrone.

Why Keeping Him Could Make Sense: Since Chris Tabor took over the team, Ventrone hasn't really been a tackler on special teams, but he still fulfills a lot of duties on the unit. Since Tabor is being brought back, he might want to retain some of the unit's continuity, especially if Joshua Cribbs, Phil Dawson, and Reggie Hodges aren't brought back.

What the Browns Should Do: The Browns saw Johnson Bademosi emerge as a solid special teams player last year, so they have some flexibility to do away with Ventrone and seek out a player who can also do a decent job depth-wise on defense (maybe even Tank Carder could fulfill that type of role). It shouldn't cost too much to bring Ventrone back, even on a one-year deal, so I see it being up to Tabor.

Now it's your turn -- vote in the poll below on whether or not the team should re-sign Ray Ventrone!