In conjunction with Jon's piece on potential free agents the Browns can pursue in the secondary, the last non-special teams player that we will take a look at is veteran cornerback Sheldon Brown. 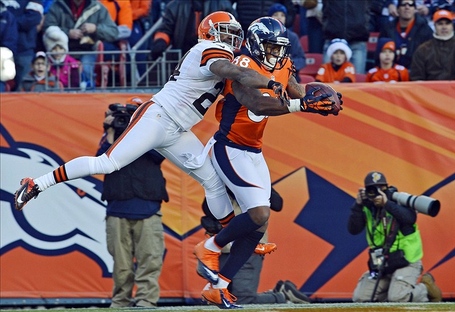 CB Sheldon Brown had another solid year in 2012; even when he got beat, his coverage was tight. Credit: Ron Chenoy-USA TODAY Sports

How and When He Joined the Browns: In April 2010, former Browns general manager executed a trade with the Philadelphia Eagles. The Browns sent linebacker Alex Hall, a fourth-round pick, and a fifth-round pick to the Eagles in exchange for Brown and linebacker Chris Gocong.

Brown restructured his contract a little bit upon being acquired by the Browns. In the end, Brown accounted for an average of $4.8 million against the cap per year in Cleveland.

Productivity Level Last Season: Brown's lengthy consecutive games streak finally came to an end at 175 this season, as he missed one game late in the year due to a concussion.

As much as some people want to use Brown's age as an excuse for deteriorating play, that wasn't the case. He was on par with how he does every year, posting 60 tackles, 1 sack, 3 interceptions (1 for a TD), 12 passes defended, and 1 forced fumble. He was beat for a couple of touchdowns, but his coverage was always tight, just like it was when Peyton Manning threw a perfect strike to Demaryius Thomas in the photo to the right.

Why Keeping Him Could Make Sense: Cleveland definitely needs the depth. Joe Haden will definitely fill one starting role, but after him, who fills the other one? Dimitri Patterson was waived last season. Buster Skrine has been awful as a starter, but good as a nickel back. The Browns need someone to pair up with Haden, and considering they are probably going to use their first-round pick on a pass rusher, they won't be doing it via the draft. That leaves free agency. Cleveland can either spend big bucks on a younger free agent, or retain Brown, even if it is just for one more year, for something like $3 million.

What the Browns Should Do: Brown will be entering his 12th season. It is tough to gauge the market for him: his cap hit was $5.4 million in 2012, but there's no way he's going to see that type of money again. He should still be a very attractive short-term option for a team seeking a No. 2 or No. 3 cornerback, though. I don't know whether Brown's history of being an Eagle -- and Joe Banner being there as well -- will matter at all.

Last year, the Browns gave Juqua Parker a one-year, $3 million deal and got great value out of him. I'd like Cleveland to do the same with Brown. It gives them the option to start him, be the third corner, or even consider a move to safety. For $3 million, his depth alone seems like it would be a wise move. With that said, I fear that the market out there will actually be a little bit wider for Brown, and that someone will offer him a multi-year deal.

Now it's your turn -- vote in the poll below on whether or not the team should re-sign Sheldon Brown!