NFL Free Agency: 5 Players the Cleveland Browns Should Sign in 2013

We are on the verge of free agency beginning, and that means it is time for my annual list of five players I think the Cleveland Browns should sign. The list does not include our own free agents, but later in the column, I will discuss a few of the in the column itself.

More: List of Players Browns Are Showing Interest In

Before I get to that, though, it is important that everyone understands the time frame that negotiations and signings can take place this year. The details I am about to describe were partially derived from Greg Bedard's piece at the Boston Globe:

I am putting my general manager CEO head coach "group decision maker" hat on in an attempt to find the best gameplan for the Browns in free agency. I did not just eyeball the best free agent at every position of need, nor did I list multiple free agents per position. These five players, in a perfect world, would have a solid impact for Cleveland, while utilizing an appropriate amount of cap space (not overpaying, but not underpaying either). I have listed the free agents in order of what I anticipate their value being worth in terms of average annual salary. 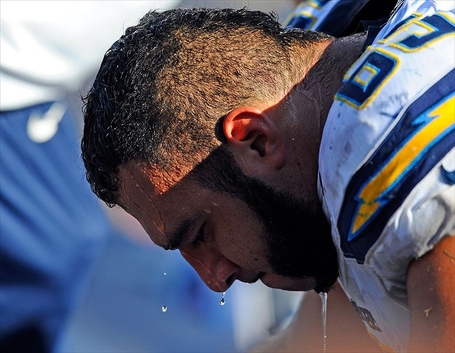 1. OG Louis Vasquez, San Diego Chargers - The Browns are strong at the tackle positions and at center on the offensive line, but are relatively weak at the guard positions. Vasquez was a third-round pick in 2009 by the Chargers and has started 54 games in his career at right guard. What has stood out for Vasquez the past few years is his stability and maturity at the position. He improved each season, to the point where he is at a Pro Bowl-level in pass protection, with quality production in run blocking.

Current right guard Shawn Lauvao has been too inconsistent for the Browns over the past two seasons. Entering the final year of his contract, the Browns can either wait to replace Lauvao next year, or act now. They should act now on a guy who Norv Turner coached the past four seasons, something that should allow him to make a smooth transition to Cleveland's line.

I think the Browns are going to utilize the draft to help find personnel for the new 3-4/hybrid defense, which means the cap space available can be used to improve the offense in free agency. Vasquez might command a five-year deal worth around $30 million; that's close to what the Browns saved by waiving Frostee Rucker (saving would come in future years). This move can make Cleveland's offensive line the best in the NFL, and should help Trent Richardson and Brandon Weeden reach the next level. 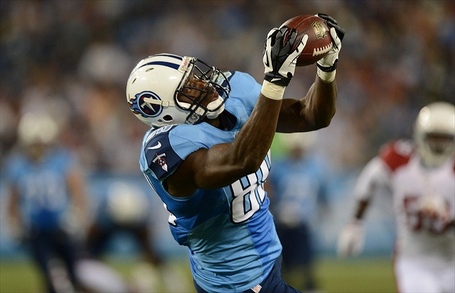 2. TE Jared Cook, Tennessee Titans - For the past month, it sounded like Cook was going to be slapped with the franchise tag by the Titans. As the deadline approached, though, reports surfaced that his people would protest that he should be tagged as a wide receiver (due to his usage on offense), which would have cost the Titans about $10 million in 2013. In the end, they decided not to franchise him. Some people believe that the Titans will still try to retain Cook, but this article explains why their new offense doesn't fit his strengths. Plus, Cook hasn't exactly been happy in Tennessee, and will likely pursue a lucrative deal elsewhere.

Personally, I have always been a big fan of Cook's since he entered the NFL (and no, it's not just because he burned Scott Fujita and the rest of our defense a couple of years ago). He has a great combination of speed, size, and hands. I think he could be right up there with the best tight ends in the NFL and has been held back in Tennessee, for whatever reason. He posted career highs in 2011 with 49 catches for 759 yards and 3 touchdowns. In 2012, those numbers dropped to 44 catches for 523 yards. Keep in mind that he was playing for a team that was stuck between Matt Hasselbeck and Jake Locker at quarterback.

Cook was upset about his utilization in Tennessee. Although he will want a fair contract, I think he can also be enticed by knowing the team who brings him aboard will make him a big part of the offense. Rob Chudzinski has all of the roots needed to talk up and utilize a tight end. He did it with Greg Olsen last year in Carolina, when Olsen had 69 catches for 843 yards and 5 touchdowns. Norv Turner (and Chud) has also done it numerous times with Antonio Gates. Adam Caplan of The Sideline View thinks that the Browns are going to take a good look at Cook.

The only tight end on the Browns' roster right now is Jordan Cameron, and he is not proven. While Cook's contract would be much higher than, say, Benjamin Watson's, this is the right year to sign him, when there is a lot of competition at the position in free agency: Martellus Bennett, Fred Davis, Dustin Keller, and Delanie Walker are all expected to hit the market, and some of those guys have had equal to greater historic "numbers" than Cook. There are also some good vertical threats in the draft at tight end, so teams might opt to go that direction vs. signing Cook. The Browns can't afford that as much, since they are without a second-round pick and need to improve their defense. In terms of a contract, I think Cook would get similar numbers as Vasquez: five years, $28 million.

3. FS Chris Clemons, Miami Dolphins - Clemons, a fifth-round draft pick by the Dolphins in 2009, is coming off of his best season as a pro. He started all 16 games, registering 98 tackles and 2 interceptions. He is not known as a ball-hawk, but is a solid all-around safety. Paired with T.J. Ward, the Browns would then be able to use the likes of Tashaun Gipson and Usama Young where they belong -- as depth. 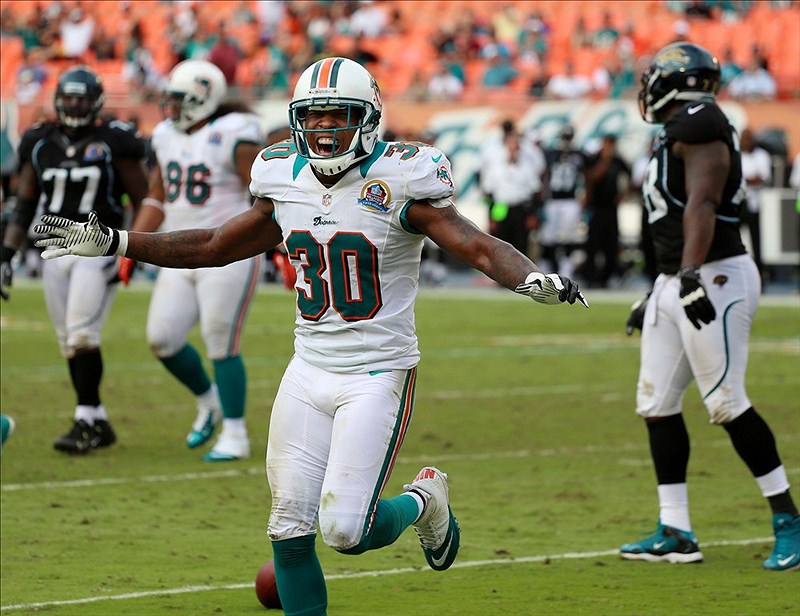 FS Chris Clemons would be a big upgrade at a position Cleveland struggled to fill in 2012. Credit: Robert Mayer-USA TODAY Sports

The Dolphins would like to retain Clemons for a bargain, but Omar Kelly of the Sun-Sentinel believes that he will test the free agent market. Miami might also be interested in signing one of the higher-profile free agents at safety instead. If that happens, the Browns can atone for letting a quality guy like Mike Adams get away for cheap last offseason by signing a guy who is younger and with more upside. It's hard to put a number on Clemons' value, but for the purposes of this projection, here is a guess: there are more coveted safeties in this year's free agent class, and he's only had one "big" season, but Cleveland will over-spend a bit to prevent him from staying with Miami: put him at 3 years, $14 million. 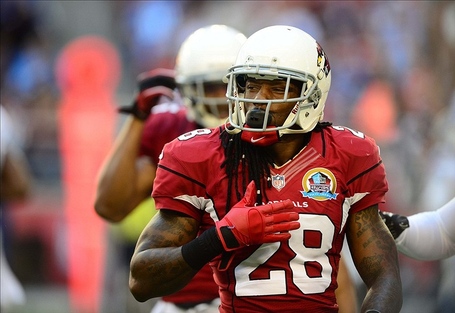 4. CB Greg Toler, Arizona Cardinals - There are two big connections at cornerback that are being made to new defensive coordinator Ray Horton. One of them is Keenan Lewis from the Pittsburgh Steelers, who Horton was with for two years. The other, and perhaps lesser-discussed name, is Toler.

He got rave reviews from Jess Root, who operates our Cardinals affiliate, stating the following: "He is physical, he can cover, and he tackles well. He can catch the ball. He was set to be the team's number one in 2011 until he got hurt. When healthy in 2012, he made plays and was statistically the best cover guy on the team." The big red-flag surrounding him is his history of injuries.

The Cardinals might have more urgency in bringing Toler back after they let CB William Gay go, but with the culture change in Arizona, Horton might be able to lure Toler to Cleveland, even if Arizona makes a similar offer, if he guarantees him a starting job. In addition to Toler, the Browns should retain CB Sheldon Brown for depth and as an insurance policy to Toler. It's tough to gauge Toler's value, again, but for now, I'll label it as being similar to Clemons' value. 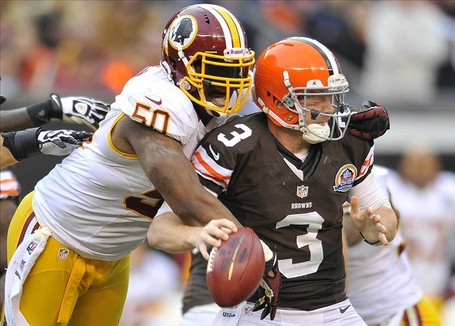 Browns fans got a first-hand taste of Rob Jackson's abilities when he faced Cleveland this past season. Credit: David Richard-USA TODAY Sports

5. DE/OLB Rob Jackson, Washington Redskins - First, it needs to be clear that Jackson is a restricted free agent at this point in time. If the Redskins do not tender him by March 12, he will hit free agency and could be a nice steal for the Browns. Last year, Jackson went from "seventh-round backup" to a guy who started 14 games in the regular season, due to the injury to Brian Orakpo. Jackson had 37 tackles, 4.5 sacks, 4 interceptions, and 2 forced fumbles on the season. He was the ultimate playmaker in that type of hybrid role, something that would seem to fit well in Ray Horton's defense.

The Redskins are in trouble cap-wise, and that's why you can't guarantee that the Redskins will even apply the minimum one-year, $1.33 tender to him. If he hits the free agent market, Cleveland should make a play -- not to act like he is Paul Kruger, but if we're comparing one-year wonders who have risk/reward potential, I'll take Jackson for a cheap deal. Heck, even if the Redskins gave Jackson the minimum tender, I would want the Browns to still offer him a contract (they'd have to give up a seventh-round draft pick).

I may have under-estimated some of the salaries I projected above, but even if I did, the cap hit in 2013 for all of the signings is only around $22 million. That's a large value, but the Browns have $46+ million in cap space, more than any other team in the league.

With some of that extra money, they should extend Alex Mack's contract, as he will be a free agent in 2014. Also, they will have plenty of space to retain Phil Dawson and Joshua Cribbs. While I'm not confident that Joe Banner will do that, he should. We have the room, and both of those guys can help maintain Cleveland's strengths on special teams. As I stated earlier, Brown should be retained as well.

I opted not to go with a receiver, because that money is being committed to Jared Cook. After seeing Brian Hartline's contract, I think Danny Amendola will cost a tad too much, and I do like our four current receivers in Greg Little, Josh Gordon, Travis Benjamin, and (assuming he receivers a tender) Jordan Norwood.

If there is a receiver out there who interests me, it might be Donnie Avery. He dropped too many passes last year, but is another guy who can stretch the field and revived his career after suffering an ACL injury a few years back. I also think that the Browns will sign a backup quarterback and ultimately release Colt McCoy. I'll go along with those Derek Anderson rumors from awhile back and project that he will be the guy. For depth at safety, I also wouldn't mind seeing Patrick Chung or Jim Leonhard signed for cheap rates.

Lastly, the Browns would target DE/OLB with the sixth overall pick in the draft. Now, it is your time to react. What are your thoughts on my scenario? Did I under-value or over-value players' contracts? Also, feel free to share your five free agents, but try structuring it with my line-of-thinking (i.e. be creative; don't just list the top player at every position).