The official start of free agency is still days away, but two of the more likely options for the Browns have already been removed from consideration, as Matt Moore and Brian Hoyer appear to be staying with their 2012 teams.

With the ink barely dry on the articles linking the Browns to the likely pursuit of Miami UFA Matt Moore, an unlikely event happened in Miami.

This event seemed unlikely as recently as the last week, as Cleveland was rumored to be offering him a chance to start. In Miami Matt will be starting the year as the backup to 2012 first round draft pick Ryan Tannehill.

Before drafting Tannehill, Matt Moore enjoyed a reasonable amount of success as the quarterback of the Dolphins. He was 6-6 as a starting quarterback, throwing for 16 touchdowns against 9 picks with a 60% completion rating.

Another potential quarterback option, Brian Hoyer, may be removed as an option for the Browns before he gets the chance to test the waters of free agency. 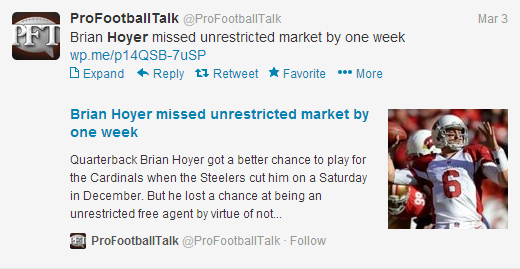 If the Arizona Cardinals use a second round RFA tender on Hoyer (which they are juuuuuuuuuuuuuuuust able to do, based on the amount of time he spent with the organization last year) any potential suitor would have to give up a 2nd round pick in order to procure the services of a quarterback that was barely able to latch on as a free agent backup quarterback last year.

The Browns lack a second round pick in this years draft, (acquisition of Josh Gordon) so in the event he's tagged, bringing in Hoyer as competition to Weeden would be a muddled proposition. The Cardinals will have to keep a viable second option to Kevin Kolb going into the draft, due to Kolb's injury history and the risk involved in this years QB crop. Hoyer was a serviceable option in Arizona down the stretch in 2012, which is a huge upgrade over what happened with John Skelton and Max Hall under center.

Options still exist for the Browns in the form of trades (Matt Flynn, Kirk Cousins, or Nick Foles) and UFA candidates Chase Daniel, Tyler Thigpen, Jason Campbell, or....Derek Anderson) The market for competition in the 2013 version of the Browns is evaporating quickly.