Speed on the Edge

Share All sharing options for: Speed on the Edge

In 2013 the NFL can accurately be described as a "passing league". Teams have moved to the shotgun, spread the field, and are airing it out. Defenses have had to respond, placing higher emphasis on sub package defenders and pass rushers.

Enter the Browns' 2013 offseason. Despite reportedly liking Jabaal Sheard in a transition to OLB, the Browns signed Paul Kruger and Quentin Groves in free agency. Then they drafted Barkevious Mingo 6th overall.

So what do you get when we have that kind of speed on the edge and we're seeing spread looks with no one in the box for pass protection? A great opportunity to use one of my favorite blitzes: "Rain"

This blitz dates back to at least the (incredible) 2001 LSU defensive scheme, and has been used by Nick Saban in various NFL/Collegiate stops and Bill Belichick with the New England Patiots. Enormous hat tip to Blitzology: 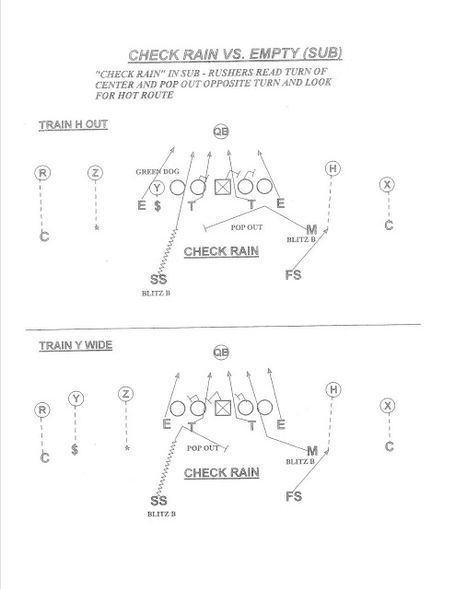 Some defenses will automatically go to this blitz when they see an empty backfield because it is designed to absolutely destroy 5-man protections. If they see empty, they "check rain". Why? Because with only 5 guys in the protection, there are only so many things you can do.

You can use a "man" or "big on big" protection where the OL will block the 4 down linemen plus one player (designated the "mike") if he blitzes: 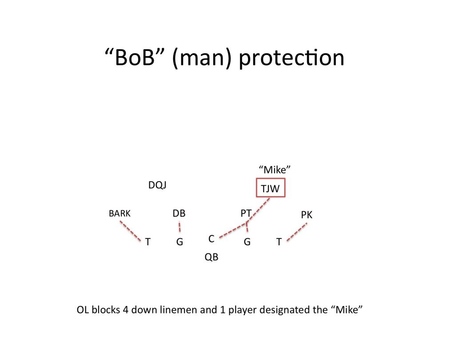 Or you can use "half slide" protection, where half of the line blocks big on big and the other blocks a gap/zone protection: 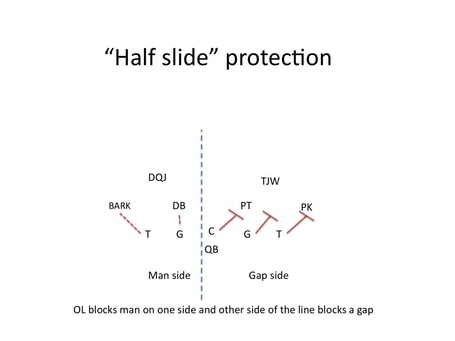 With either protection you are going to get a "big on big" look to one side.

For this example let's assume we are facing an empty backfield. Let's say our dime defense includes Kruger and Mingo as ends, D'Qwell Jackson as the lone linebacker, and TJ Ward as one of the safeties. For this blitz, we'll align the tackles at 2-techniques over the guards, the ends at "wide 9s", and we're walking TJ down into the box: 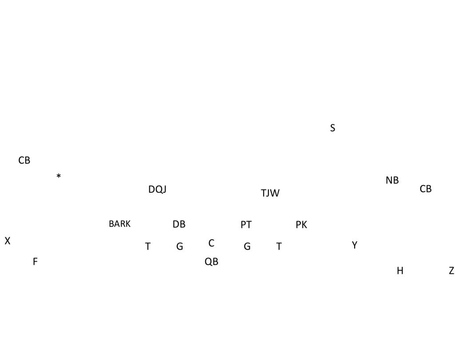 On the snap, the ends will rush the edge. This is where their quickness stresses the protection by pulling the tackles wide. At worst, the OTs should be able to block them but wide and deep in the backfield, away from the middle of the play.

Both DTs will slant inside to the A gap to either side of center. With big on big ("BoB") protection, this will initially bring the guard inside until he can pass the tackle off to the center and pop out to block the "mike": 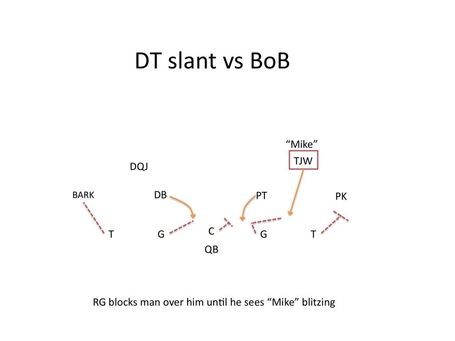 With half-slide, the Center will be sliding away from one guard, and that guard will have to continue to block the slanting DT: 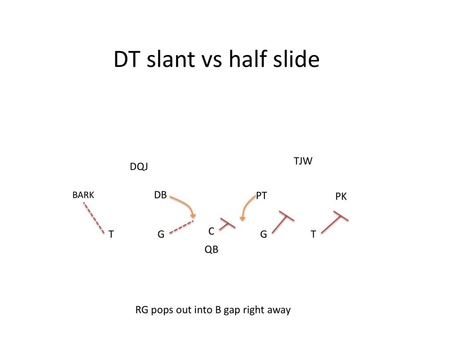 With the edge rusher getting up the field and one of the guards following the DT inside a seam opens in the protection. In our example this happens on the left side of the protection: 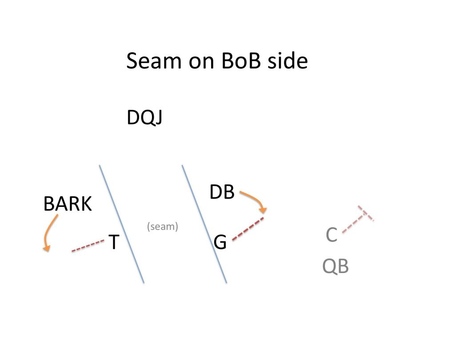 The offense knows it can only block 5 of the 6 defenders in the box, so they have to account for the 6th guy by throwing "hot." In this example, the offense can block all three defenders on the right side of center but only two on the left:

The remaining defender (here D'Qwell Jackson) will be accounted for with a hot route:

Without knowing which side the offense is sliding to or who their "mike" is, the defense cannot know which side of the line this seam will open on, but this is where the genius of "Rain" comes into play.

The two inside players (here D'Qwell Jackson and T.J. Ward) will both be blitzing the B gap on their side. If they see the seam open up, they will hit it full speed and get a clear path to the QB: 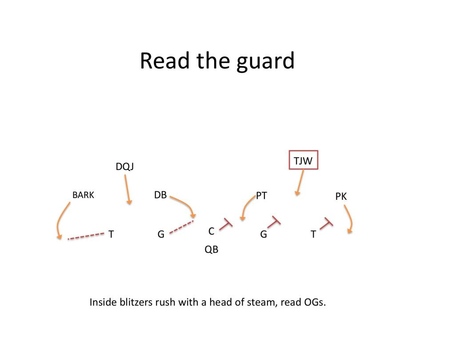 If they see the slide come to them, or if they see the guard on their side in position to block them, they will pop out of the blitz and look to "rob" the hot route from the opposite side of the field: 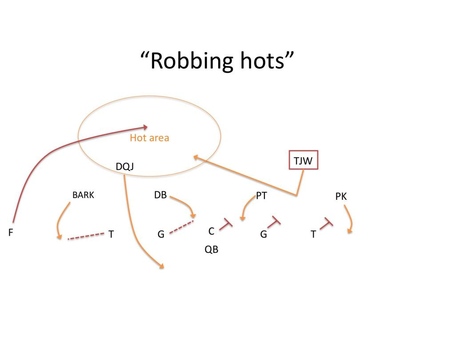 The direction of the OL's slide will determine who blitzes and who drops, but the hot route will always be opposite the strength of the protection. Here's the blitz with the opposite protection: 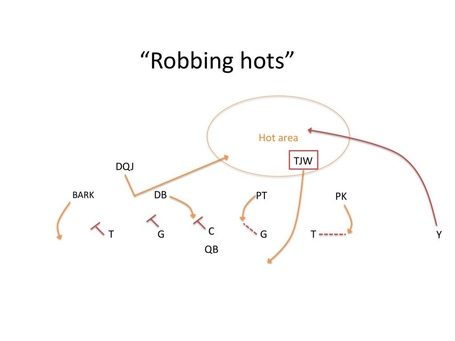 Because the defense won't know which way the protection is going, it has to read and react to get a free rusher to the QB. But with only one read, the defense can defend the hot and assure itself a free path to the QB.

This blitz is often used with Cover-0 man (plus the "robber") behind it but could also be used as a zone blitz with 2 deep/4 under or 3 deep/3 under:

With pure man (Cover-0) the defense defends the hot route thoroughly but they go "all in" and rely on the blitz to hit home. Zone coverages behind this blitz they may leave an underneath receiver more of a seam but mitigate risk deep if the blitz doesn't produce a sack. This can be a high priority against mobile QBs.

Let's at this glorious Patriots' sack of Joe Flacco in the 2012 AFC Championship. The ravens' protection slid to the left, leaving them without a blocker for James Ihedigbo. But you'll notice that Rob Ninkovich was also close to sacking Flacco: 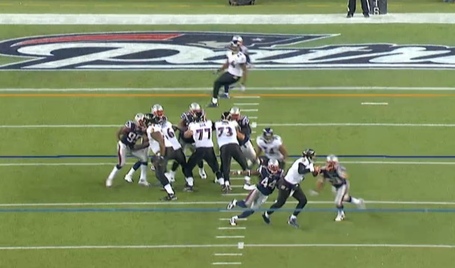 Why is this? OT Michael Oher saw the blitz, tried to slow Ninkovich down, then tried to redirect to Ihedigbo. He never could have blocked both players cleanly, but if Oher got just a piece of Ihedigbo it might have given Flacco the time he needed. That's how small the window of opportunity is in the NFL.

Oher couldn't get a hand on both rushers because of the speed Ninkovich has off the edge and how much of a seam Ninkovich was able to create between the guard and tackle. The speed that the Browns now have at the edge rusher positions can produce sacks by itself but will also help make the entire defense better.