In a several part series here at DawgsByNature, I will be breaking down Davone Bess' film in an effort to illustrate some of the characteristics that I expect him bring to the field next season. With the focus of many fans and media members being on the players acquired on defense in the NFL Draft, Davone Bess may be getting overlooked but the fact remains: Bess is another weapon we've quietly added to an already budding young offense.

After breaking down and watching his film, I am confident The Browns were able to land a dominate slot receiver with their trade during the draft. Bess has shown consistency vs good defenses; great route running ability; quickness; termendous hands; field awareness and balance; toughness; power; and play making ability. These will all be welcome additions to the field on Sundays for Browns fans and our offensive gameplan.

Let's start with a double whammy. Let's take a look at our new WR, Davone Bess absolutely tear up the Steeler secondary for a 26 yard TD with the "icing on the cake" being a very clear illustration of the Steerler's head hunting ways. You can watch the NFL.com video of this exact play HERE. 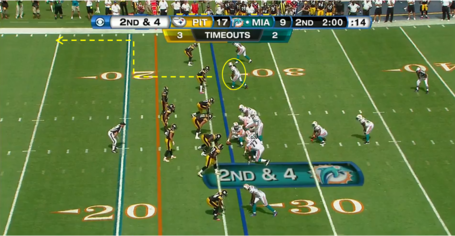 This is a simple out route, that Bess runs perfectly and then some. Here you can see him lined up in the slot near the top of the screen and the route he will perform. The defense is in a Nickle package, playing man to man press on the WR's with single safety deep --- the defense is getting ready to blitz. 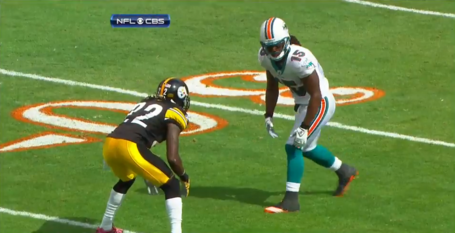 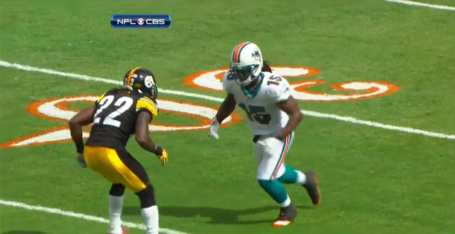 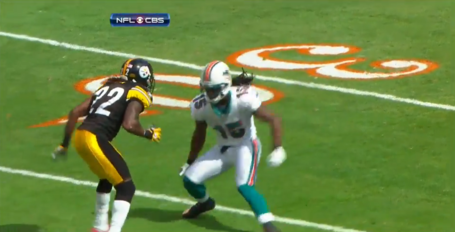 Bess sets up the CB by jumping off the line of scrimmage, showing an inside route. He sinks his foot in the ground. . . 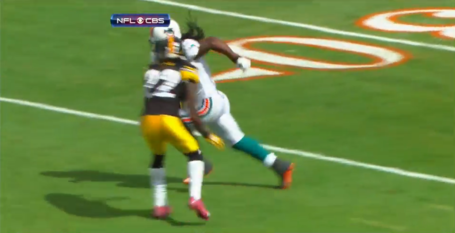 . . . and uses his speed and quickness to immediately beat the CB and gain inside leverage. 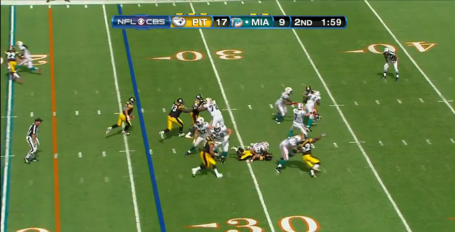 Chad Henne sees this, and you can see him ready to release the ball well before Bess even breaks out of his route and turns his head. Here you can see 6 rushers, including one gloriously sandwiched Steeler eating turf. 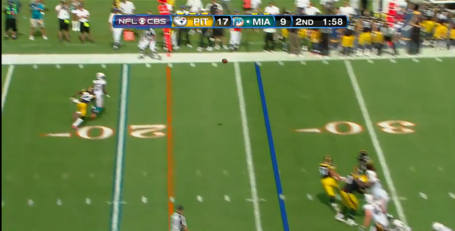 As soon as Bess whips his head around, he is looking for the ball and more importantly he expects it. This is good because as you can see, the ball is already on it's way. Notice Bess has run his route well beyond the first down marker here, which is an always well appreciated in Cleveland because either by scheme or by their own ineptitude, Browns' WR of past have been terrible at running routes that get us first down yardage. 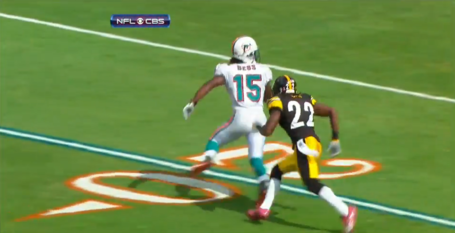 Here you can see another illustration of how Bess immediately gets his head around and looks for the ball. 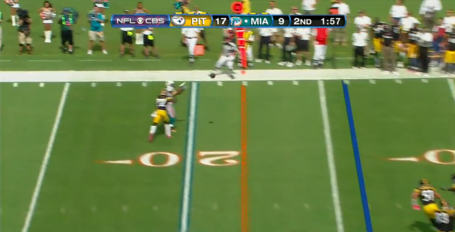 Not bad for a small slot receiver, extending his arms, using his body to shield from the defender and going out to snag the ball with his hands. 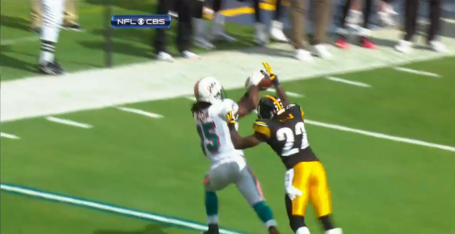 Then, Bess makes the difficult catch while under pressure from the CB --- who has now made up one of the two steps Bess won at the beginning of the route. 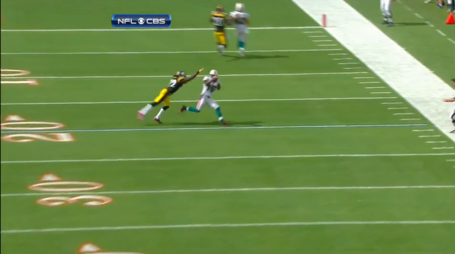 Again, notice the space he still has created; his arm extension; body placement between the defender; ability to use his hands to snag the ball away from his body; and the focus displayed to make the catch under pressure. 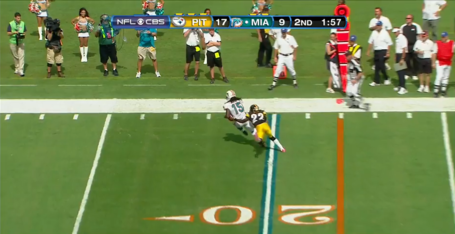 Once Bess completes the catch, again, notice where he finishes the catch: with his body between the ball and the defender. He's now pivoted to the sideline, initializing an explosive first step out of his route and down the sideline. 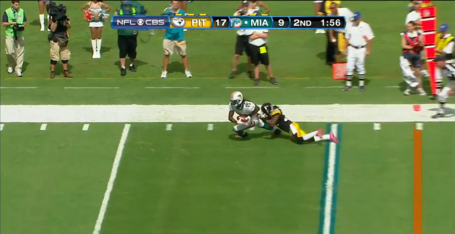 Here he shows the power to beat and then shed the tackler, who is now literally hanging on, trying to drag him to the ground. 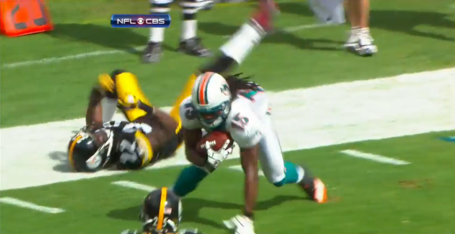 After making such a play some players might lose their awareness of the rest of the defense, but Bess is able to remain balanced, in bounds, all while also keeping his eyes up and focused on what's next >>> He's already picked up Clark approaching. 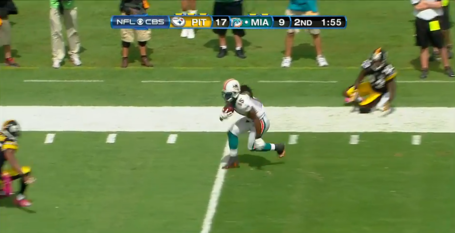 He's now up out of his crouch and in the open field, having just smoked the CB, he's already focused on setting up the safety with his short distance quickness and footwork. Here you can see his move beginning to the inside, which has caused Clark to begin taking a big step inside. 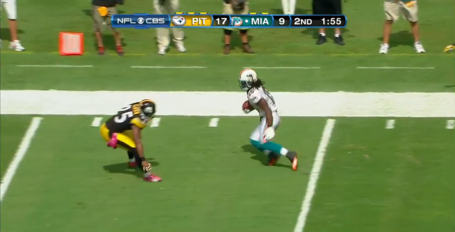 Here you can see the result of that set up move. Clark is way off balance, yet Bess has already begun to shift his weight and momentum to the outside. Notice the footwork. Tight. Together. Balanced. 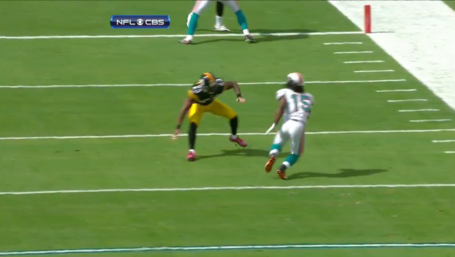 While Clark is clearly beat to the outside, here you can see him begining to recover as Bess continues his break outside, translating those quick feet into speed. 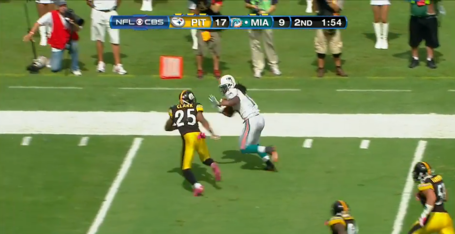 Realizing Clark has recovered, Bess switches from route running, catching, quick and balanced footwork in space to now having to create space through power. Here you see him begin to stiff arm technique. 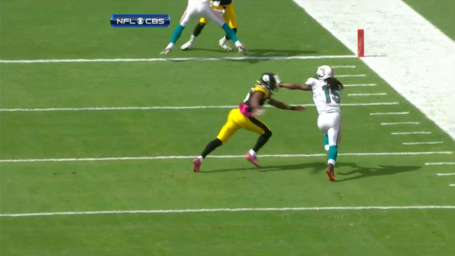 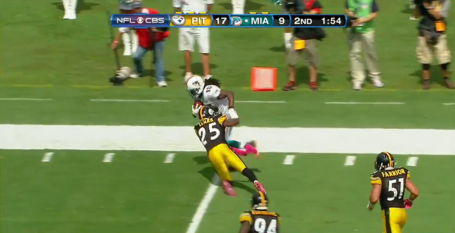 He's able to place his hand, push off with power and create space --- notice the placement of his eyes, he's already staring down at the side line plotting his foot placement. 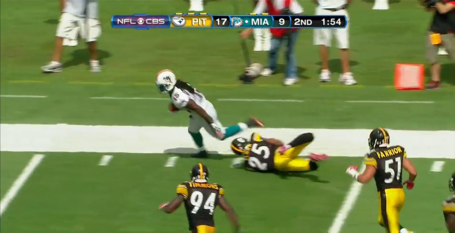 Here you see that speed to power transition, and his perfect foot placement and body awareness. 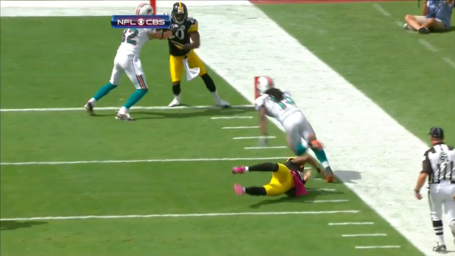 Take a better look, because this play was reviewed for this very purpose. But it was upheld that Bess kept his foot inside the field of play. Again, showing great balance, awareness and play making ability. 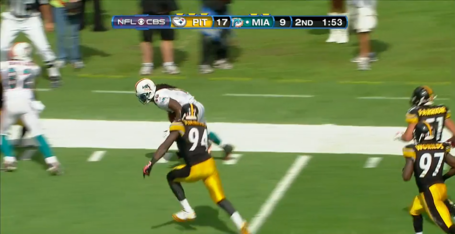 Here Bess is recovering from his perfect foot plant and on account of the arm tackle attempt from Clark on his ankles he stumbles just a bit, but again, his eyes are forward looking for the hole in the defense as the goal line is now less than 4 yards away. I have to assume he also sees Timmons, #94, bearing down on him from the inside. 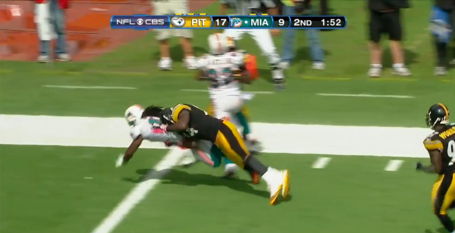 Bess sees the only chance and takes it, a dive into the end zone thanks to a perfect seal block from his fellow WR, Brian Hartline. But, this doesn't come easy, as he is before being lined up and head hunted by the Timmons. I'm not sure if you can lead with your helmet more than this. . . actually slowing it down like this may give you an argument that he wasn't, but watching it live makes you skeptical that his intention wasn't to lead with his helmet. 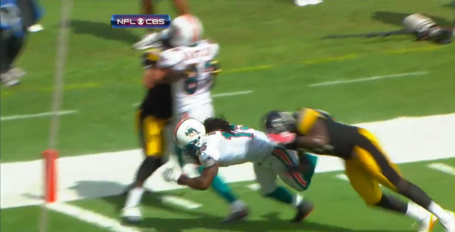 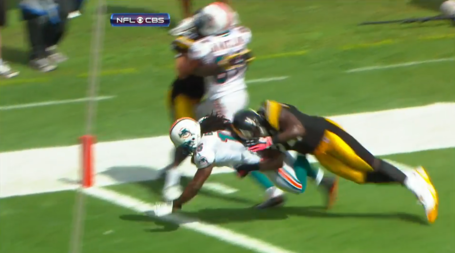 And there you have it Browns fans. My first look at Davone Bess and what the Browns can expect him to bring to the offense next season: Route running. Speed. Hands. Awareness. Balance. Toughness. Power. Body control. Play making ability.

Stay tuned for the next part of the series coming next week.