According to Nate Ulrich, a Houston TV station is reporting that the Browns are one of several teams that have confirmed interest in the ex-Ravens FB, Vonta Leach per Vonta Leach himself. Apparently Leach told the station the Browns were among the teams who have shown interest.

I think I speak for many Browns fans when I say that there should certainly be an upgrade at FB this season. It would be a welcome addition to the running game and Trent Richardson in particular. The thing about Leach is that he doesn't quite fit the mold of a Norv Turner fullback. However, he would be a considerable upgrade to Marecic and would once again be helping make a division rival weaker.

I am assuming that a one year deal or even a manageable two year deal could be worked out. But time will tell if we're even a serious player in this race. According to NFL network show today, The Dolphins had shown considerable interest in Leach and were making him a priority.

What do you think the Browns should do?

Does Leach fit the mold?

Is he worth the money?

Do you feel he would he be around and productive for more than a year?

Here is some food for thought: 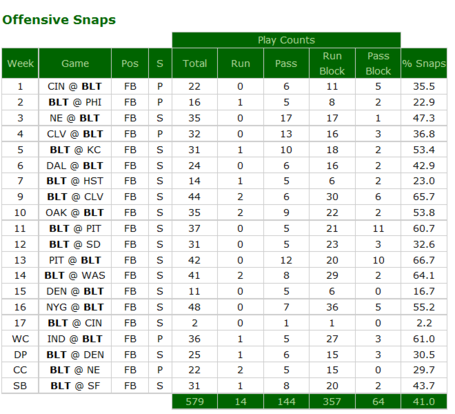 Above you see Leach's 41% snap count. . . not bad involvement in either aspect of the offensive game.

Owen Marecic was busy pouring water cups and making sure jackets were ready for the players on the field.

Vonta Leach was the #1 rated overall and blocking FB according to ProFootballFocus in 2012.

I like me some green. . . even if I have to Leach it off the Ravens.

I need to call upon movie quotes to describe Marecic, so in the hilarious spirit of Forgetting Sarah Marshall:

"Now you're not doing anything at all.. Do More."