"First" Part of Stadium Signage is Complete for Browns

Share All sharing options for: "First" Part of Stadium Signage is Complete for Browns

If anyone watched the live footage on ClevelandBrowns.com on Friday, you saw that the "First" part of the FirstEnergy Stadium signage was completed by the end of the day, along with the blue logo on the left-hand side. The photo below is from the team's Twitter account for FirstEnergy Stadium. 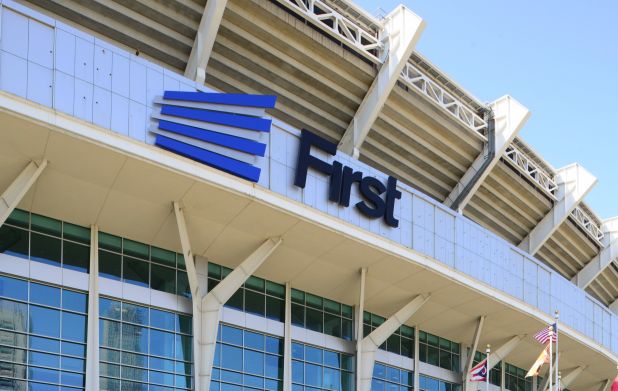 Just how big is the signage going up around the stadium?

The new "FirstEnergy Stadium" signage on the North & South exterior facade is more than 186 feet long and weighs 3,500 pounds #Browns

The process was supposed to originally begin on Thursday, but was delayed until Friday due to storms on Thursday, according to Nate Ulrich of the Akron Beacon Journal. Ulrich also had some more nuggets about how visible the signage will be in other areas around the stadium:

Other terms include: An illuminated exterior sign and internal signs, among them a FirstEnergy Stadium sign at each end of the 50-yard line; a percentage of time on LED screens; tickets for FirstEnergy employees; the presence of Browns players and coaches at FirstEnergy promotional events; and a rooftop sign visible from aerial views. FirstEnergy already owns a suite at the stadium.

Browns first-round draft pick Barkevious Mingo was among the people who watched the first part of the sign being put up in person:

It is unclear at this point when the remainder of the signage will be put up, but I anticipate it would be next week. You can see more photos of the signage being put up here and here.