Would you trade Josh Gordon for a first round pick, right now?

The DBN radio segment that took up a large portion of our broadcast revolved around a hypothetical question posed by our writer, Matt Wood. The question: If YOU were the General Manager of the Cleveland Browns, and someone offered you a 1st round pick for Josh Gordon TODAY, would you consider it?

Share All sharing options for: Would you trade Josh Gordon for a first round pick, right now?

Despite spending a half hour debating the merits of this issue, the fighting spilled over to the airwaves. The following is a transcript of the conversation: What do you think, Browns fans?

Mike Krupka: "Hey guys, I thought I'd pull this up and take a look together based on Wood's question today and some of the comments regarding Josh Gordon.

Can we link any of these 2nd rounders (and their fall there) to drug use? Better yet, does this recent history show any support that 2nd round WR > or = 1st round WR?" 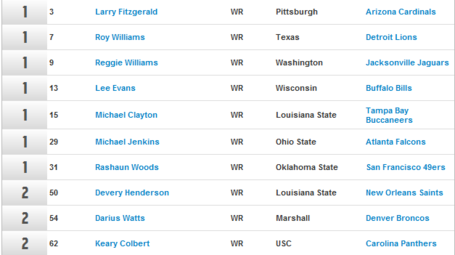 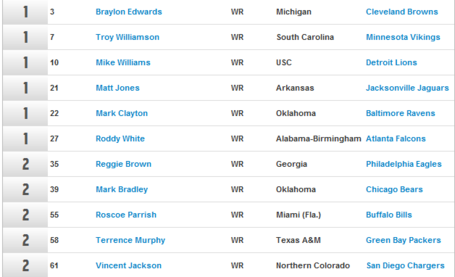 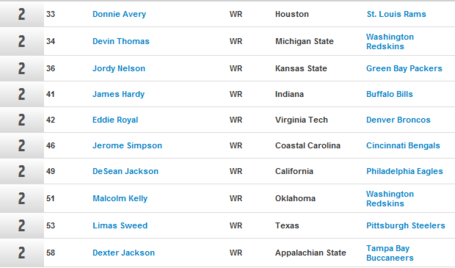 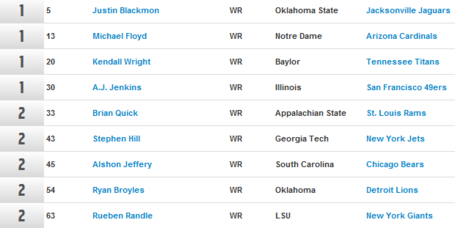 Notthatnoise: "To me it looks like the top receivers are almost always taken in the first round, with the exceptions of Desean and Vincent Jackson. You should post this on the site."

Josh Finney: "I got the exact opposite from this; lots of elite WR in second round, with plenty if bust rate in the first. (Vjax, Jennings, etx)"

Notthatnoise: "Wait, what? What elite receivers are you seeing in the second round? I'll make a list:

There's at least twice as many guys from the first round, and most of those guys were in the top ten, with White and Thomas being the exceptions.

Josh Finney: "This really belongs on DBN where the unwashed masses [edit: BRILLIANT BROWNS WORDSMITHS] can add their perspective, but....

That line is difficult to draw, but if we're adding Roddy White/Demaryius, I think Jordy Nelson should be on there as well.....but really, the line of "#1 wideout" is flimsy and subjective.

The point that I was making last night is that you CAN find a #1 type of wideout in the second (and below), but you almost NEVER find a #1 type of QB in the second round. If you've got an asset that is completely unreliable but has first round talent, and you're offered a #1 draft pick and the ability to a) get that extra 11% success rate for a kid that ISN'T a train wreck outside of the facility....

Not saying i'm pulling the trigger, just saying that you have to at the VERY least look at the talent available in the upcoming draft and where the draft pick will be."

Notthatnoise: "I can understand your argument with Thomas, but White has had over 1100 yards every year for the past six years. Nelson has one season over 1000 and only two total seasons over 700. Besides, if you look at those two lists, I think every guy from the first round is better than every guy from the second. That's debatable of course.

As far as the trade goes, I don't think you take a low first round pick for Gordon, because even though he was a second round pick in the supplemental draft, he was an early first rounder if he had gone to the normal draft. Gordon has the potential to be one of those guys I listed, and so far returns are quite promising. In addition, if you break things down a little further, you have 6 guys who were taken in the top 10 and six who were taken 54 picks below that. Clearly your chances of getting one of those receivers drops off of a cliff after the first ten picks. Unless that's the kind of pick we're getting for Gordon, i say no way."

Josh Finney: "Nelson only had one year as a primary target, and he was fantastic in that role. He was hurt last year. Also, something HAS to be used to adjust for the offenses some of these guys are operating in, and Atlanta's team last year featured a) a pass heavy attack, b) a quarterback who had a fantastic year and got the ball out quickly and c) Julio Jones absorbing the teams best defender. Guys like Torrey Smith are influenced negatively by the system they operate in.

I LIKE Roddy White, but I'm not sure that you put him in the "elite" category. He's clearly a #2 on that team, and likely a #2 behind all of the guys I listed, including Jordy Nelson at this stage of Roddy's career.

My rankings of those WR, at this stage in their careers:

I'd put Vincent Jackson and Greg Jennings ahead of Roddy or Demaryius, and place Boldin and Jackson right on the back side of those guys, talent wise.

You have to remember that all those second rounders excepting Anquan have been dominating guys, the kind of players the defense HAD to be aware of at all times when healthy, and I think that you definitely add Percy Harvin to the list of the first rounders that fit that bill."

So, long argument aside: what do you think, Dawgsbynature? Do you consider the slot and upcoming draft if the offer is made before you respond, or do you reject the premise?

I think after the outpouring of love for Lebron James by Gordon last night on twitter, I know what my answer is.