Fan Perception: What We Learned About the Browns Running Backs Heading Into Training Camp

Share All sharing options for: Fan Perception: What We Learned About the Browns Running Backs Heading Into Training Camp

In each of our training camp previews, we conduct a poll at the end of the post. The polls are intended to gauge fan perception about certain players or roles on the Cleveland Browns heading into training camp. In a way, it helps set the initial bar of expectations that fans will have. Here is a summary of each of those polls:

What is your confidence level in Trent Richardson being healthy for training camp and sustaining an injury-free season? 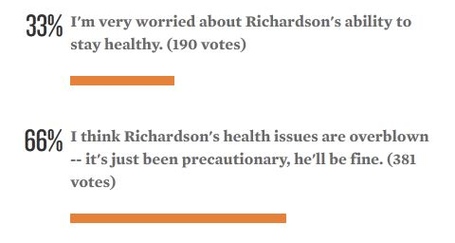 The majority of fans don't think Trent Richardson's health issues will be a recurring problem. That evidence was all supported by our fan prediction post about Richardson, where the average fan thought that Richardson would play in 15 of the team's 16 regular season games. Although the fans might be sustaining confidence in Richardson, early on in camp, you just know that questions about his health will dominate the local media coverage. And, any time Richardson even misses a play or two in camp, it will be over-scrutinized to the "nth" power. [Read Part 1 of our RB Preview]

Who do you think will be the Browns' third-down running back in 2013, if Trent Richardson isn't in the game? Note that a third-down back is different than the "No. 2 running back" at times. 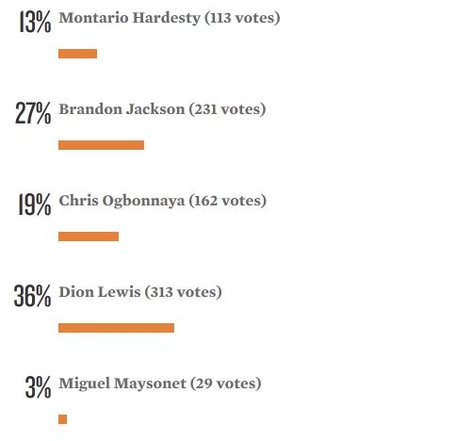 I'm not surprised that Montario Hardesty got the least amount of votes among the known backs, as he seems more fit for the role of being the No. 2 running back. I was at least a little surprised to see newcomer Dion Lewis, acquired in a trade from the Eagles, receive the most votes. Brandon Jackson, who I constantly gush over, received the next highest number of votes, followed by Chris Ogbonnaya and Miguel Maysonet. The competition for the third-down running back role should be one of the more interesting ones in camp this year. [Read Part 2 of our RB Preview]

Will Owen Marecic make the final roster for the Browns in 2013?

Yikes, not a lot of confidence in Owen Marecic, is there? The question is this, then: if 70% of you believe Marecic is a goner, then who would be the Browns' primary fullback on opening day? [Read our FB Preview]