What are our opponents up to?

Share All sharing options for: AFC North - Our Opponents' Activity 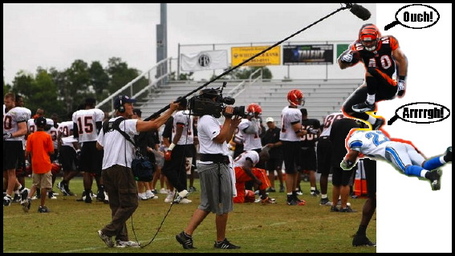 What devious ploy are the Pittsburgh Steelers up to? It looks like they´re going to suck, like they did last year, when they finished 8-8. They have one of the oldest rosters in the NFL with no significant upgrades at any position. If you thought, the Browns couldn´t be outdone in terms of lackadaisical off-season moves, the Steelers potential negative success trajectory is even greater, if you want to bet on their awesome acquisitions. It´s a mix of underrated draft picks, and unproven veterans. Promising maybe, but guaranteeing nothing. 8-8. In Pittsburgh. 8-8...Todd Haley was not allowed to speak to media, since last season ended. Do you think, the Steelers are looking forward to losing a Super Bowl, with the 2008, Cardinals Super Bowl participant? Ben Roethlisberger is a fountain of youth and resilience. Bruce Gradkowski sure is a championship player, as proven in all of his six NFL stops since 2006. Landry Jones is the most awesome Oklahoma quarterback ever. And John Parker Wilson will surely continue, where he left off, winning championships for Hoover High in 02 and 03.

The Cincinnati Bengals, who have been to the playoffs two years in a row, and have an owner, named Mike Brown, and a coach, named Marvin Lewis, aim to make Home Box Office rich again, appearing in the wildly popular TV Show "Hard Knocks", for the second time. Consecutively, with four years in between. The author does a good job of explaining, that if you don´t really know a lot about them, you´re not in a minority nationally, because most US citizens, still haven´t located Ohio, or Cincinnati.

Don´t question the defending Super Bowl champion! Of course they deserve, Matt Elam dropping all the way through round one, to fall to the Baltimore Ravens, at pick 32, so they don´t spend a single second, missing future Hall Of Famer, Ed Reed. Under Armour also makes sure, no Baltimorean loses any nerves, worrying about Matt Elam´s bank account, as they hold out on his contract.