Fan Perception: What We Learned About the Browns Linebackers Heading Into Training Camp

Share All sharing options for: Fan Perception: What We Learned About the Browns Linebackers Heading Into Training Camp

In each of our training camp previews, we conduct a poll at the end of the post. The polls are intended to gauge fan perception about certain players or roles on the Cleveland Browns heading into training camp. They help set the initial expectations that fans have on certain players. Here is a summary of each of those polls for the linebackers:

What are your expectations for OLB Paul Kruger this year? 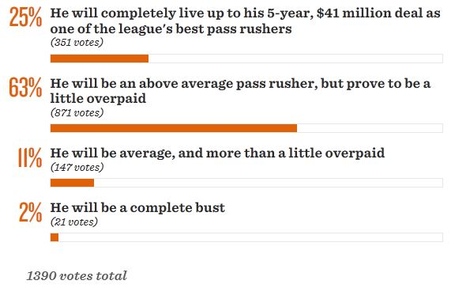 I voted with the majority, feeling that Paul Kruger will be an above average pass rusher who is a tad overpaid. That is my optimistic take, because I still am a little nervous that he will turn out to be "average, and more than a little overpaid," based on how he performed when Haloti Ngata wasn't in the lineup. Having Barkevious Mingo and Quentin Groves available as backups helps ease some of those concerns. [Read Part 1 of the LB Preview]

When will Barkevious Mingo be promoted to a starting OLB for the Browns in 2013? 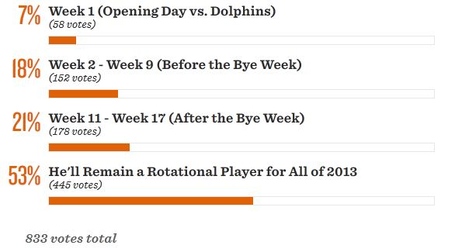 I was actually quite surprised to see the majority of votes thinking that Barkevious Mingo won't be put into the starting lineup until 2014 or later. Is that acceptable for the No. 6 overall pick in the draft? Sure, why not -- the hope is that the guy can deliver in the long run, and allowing him to stay fresh early on and get a feel for things can help him when he eventually does take over. I voted for him starting after the bye week. [Read Part 2 of the LB Preview]

Who do you want to see start at ILB next to D'Qwell Jackson? 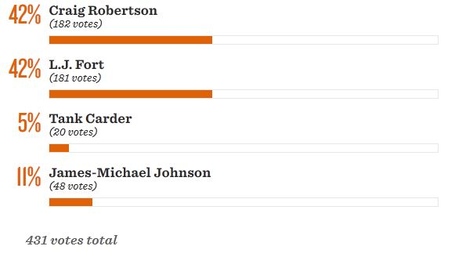 After my vote for L.J. Fort, it was nearly a dead heat between he and Craig Robertson. Fort had a ton of support in training camp from fans last year as an underdog, but after only getting one start in 2012, I thought fans would just opt to go with Robertson by default. Instead, many of them stuck with Fort, despite the rep disparity between the two in 2012.

James-Michael Johnson got very little support, perhaps showing just how much weight Terry Pluto's one column played into fans' thinking. If Pluto had never written that, I'd venture to guess that Robertson and Johnson would have been neck-and-neck in this poll. [Read Part 3 of the LB Preview]

Which of the linebackers from today's preview are you most intrigued by? 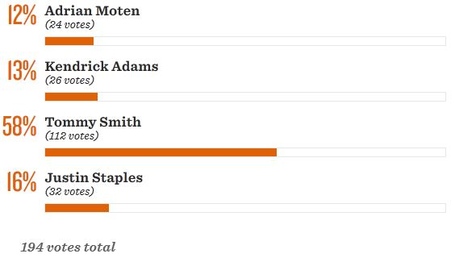 Tommy Smith had received the most publicity of these four players this offseason, so I'm not surprised to see him as the favorite. I think Justin Staples picked up a few more votes than the others because of his local ties (St. Edward High School / Lakewood, OH). [Read Part 4 of the LB Preview]

On Sunday, we will begin discussing the Browns' special teams units, which include kicker, punter, long snapper, kick returner, punt returner, and gunners.