Fan Perception: What We Learned About the Browns Special Teams Heading Into Training Camp

Share All sharing options for: Fan Perception: What We Learned About the Browns Special Teams Heading Into Training Camp

In each of our training camp previews, we conduct a poll at the end of the post. The polls are intended to gauge fan perception about certain players or roles on the Cleveland Browns heading into training camp. They help set the initial expectations that fans have on certain players. Here is a summary of each of those polls for the special teams units:

Who will be the Cleveland Browns' starting kicker in 2013?

My vote went to Shayne Graham, but it was not an easy decision. I think Brandon Bogotay received the majority of the votes because fans are thinking long-term. The Browns are one of, if not the youngest team, in the NFL. Going with Bogotay would seem to align with that. However, he's still an unknown commodity -- in that sense, he is really no different than any other typical "backup kicker" that a team brings into camp every year.

The Browns want to be young, but they want to win as well. Kicker is a position that you don't need to care about a player's age, necessarily. If Graham can hit game winners vs. a guy like Bogotay, you go with the veteran to help boost your win total and thus, overall team morale, heading into next offseason. [Read Part 1 of the ST Preview]

Who will the Cleveland Browns' punter be in 2013?

Whew, we have our first landslide in a poll. That's a bit surprising considering that both players are new to the team, Spencer Lanning has never started in the NFL, and T.J. Conley started a full season in 2011 for the Jets. I agree and went with Lanning, though. He has been with special teams coordinator for three years as a reserve now, so he is the favorite. [Read Part 2 of the ST Preview]

Who will be the Cleveland Browns' primary kick returner in 2013? 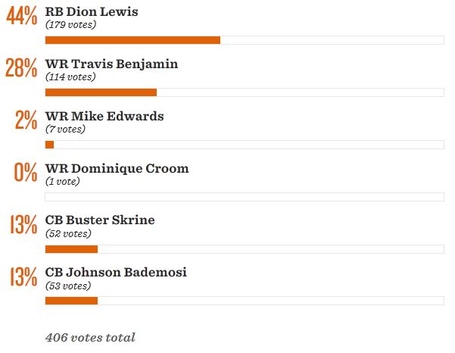 RB Dion Lewis did some kick return work in 2011, but only averaged 21.6 yards per attempt on 31 tries. The pre-camp talk seems to have CB Johnson Bademosi as the favorite. Can WR Travis Benjamin perform well enough on kick returns to man both punt and kick return duties? Kick return still remains a wide open competition heading into camp. Remember, Joshua Cribbs once made the Browns as an unknown, so maybe someone like Dominique Croom or Mike Edwards stun the world. [Read Part 3 of the ST Preview]

The only positions we have left to cover are safety and cornerback, so that will be what you see here at DBN leading up to the start of training camp next week.