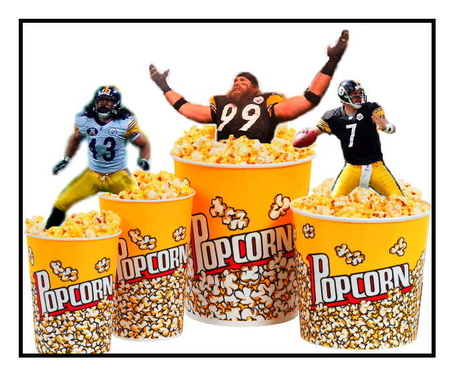 What are our devious adversaries up to this week? Probably counting their chickens, and making sure none of them lays golden eggs. Meaning what? Meaning, what malicious schemes do they have cooked up stacking their depth charts into the Netherlands. Netherlands? Well, you know, the creep charts. 4th, 5th and 6th on the depth chart. In the Ravens case, for one poor guy, even 7th. Basically recycling some top talent out of the NFL. Dispensing of them, by making them think they lucked out, just a little more, than the chumps, by letting them sniff the hoses of NFL superstardom. The champs to chumps program. From amateur to professional to retirement in record time. Probably just fast enough so they don´t second guess, why they passed up those honors classes and chose Bowling 103. Of course any Browns opponent must have a particularly villainous plan cooked up, to lure athletes into the lower tax brackets. And they do. The Steelers have to make it look like they´re ready to replace their old folks home of a starting roster, that´s why 2nd and 3rd on the depth chart looks particularly encouraging. Apart from four excellent players, so ridiculously far back in the depth chart, someone is going to jail, everyone else sucks, because they know they will suck this year, if the direct back-ups don´t push the starters out. Like any well managed post recession team, they don´t fail to manage failure as well as they would success. The Bengals, following two playoff appearances and some very confident drafts, you know, drafting like you´re entitled, are on the clock. Thus their entire training camp roster of 90 men, appears stocked. What´s wrong with that? Well, only 56 make it, remember? The Ravens, coming off of a Super Bowl, need an excuse, because they sense, without Ray Lewis and Ed Reed, they weren´t nearly geared up for a Championship run. They´re not apologizing, they will make it very evident, so they can corner the blame themselves, rather than be laughed at. Thus they´re camp invites are ridiculously inadequate to contend for a defending Super Bowl champion roster. Yeah, yeah, yeah. But, are the Browns better, cast the first stone and all...Well, yeah, the Browns are a reputable franchise.