Fan Perception: What We Learned About the Browns Wide Receivers Heading Into Training Camp

Share All sharing options for: Fan Perception: What We Learned About the Browns Wide Receivers Heading Into Training Camp

In each of our training camp previews, we conduct a poll at the end of the post. The polls are intended to gauge fan perception about certain players or roles on the Cleveland Browns heading into training camp. They help set the initial expectations that fans have on certain players. Here is a summary of each of those polls for the wide receivers:

Who do you consider to be the Cleveland Browns' No. 1 receiver heading into training camp?

I read an interesting comment from realmccoy regarding this poll, which was the following:

I won’t argue that Little is No. 1, but he would be in the range of the 40th-best wide receiver, and that is not a good sign to have him as your No. 1.

It is an interesting predicament in trying to decide whether Greg Little is a legitimate No. 1 receiver in NFL terms. When you are comparing him with the best of the best, then no, he's not going to be a Calvin Johnson, A.J. Green, or Julio Jones. At his best, though, maybe he develops into a solid, Anquan Boldin type of guy in terms of being the physical bail out receiver.

Little almost seems like a unique breed of a receiver in the NFL, and that isn't a bad thing. Still, the "label" is the guy who gets marketed as the receiver who is expected to rise up to be "the guy" if needed, and that is Little right now.

Josh Gordon is much more likely to become a No. 1 receiver in terms of productivity and drawing the best coverage, but he needs to get his head on straight to make that a reality. This is the same city that saw Braylon Edwards go from being a top receiver in the NFL all the way to nothing in a short period of time; we don't want anything similar to happen for Gordon.

If only one of these receivers could make the team as the No. 5 receiver (let's ignore the Josh Gordon suspension), who would you like to see get that spot? 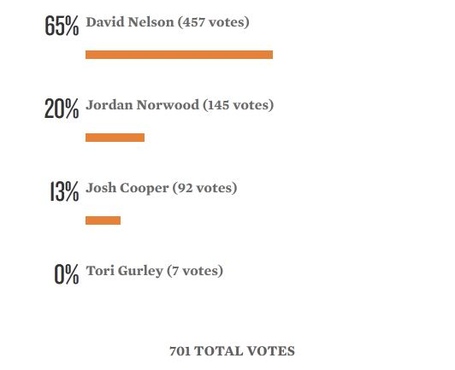 It's not surprising to see David Nelson running away with this one -- his size offers something that not only the other three guys don't have, but the first four receivers on the depth chart are smaller than him as well. If he is recovered from injury, Nelson would be a guy with starter potential playing a niche role in Cleveland (as a red zone specialist, presumably). Jordan Norwood still got a respectable number of votes, but after Josh Gordon's suspension is done, I think he will be cast aside.

Which of these undrafted free agents would you like to see make the Cleveland Browns' practice squad? 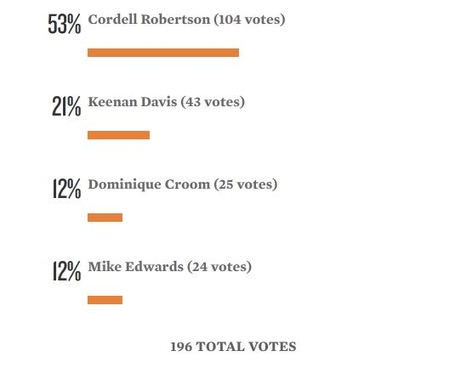 I think the limited addition I was able to provide on Cordell Roberson -- namely, that he was scouted by Scott Turner -- is the reason he received more votes than the other. There was a decent amount of support for the other three guys, though, so it sounds like fans have chosen their underdog they'd like to root for in training camp.

Mike Krupka will have some analytical stuff on the receivers soon, as we'll also shift to the tight ends for our general training camp previews.