Fan Perception: What We Learned About the Browns Tight Ends Heading Into Training Camp

Share All sharing options for: Fan Perception: What We Learned About the Browns Tight Ends Heading Into Training Camp

In each of our training camp previews, we conduct a poll at the end of the post. The polls are intended to gauge fan perception about certain players or roles on the Cleveland Browns heading into training camp. They help set the initial expectations that fans have on certain players. Here is a summary of each of those polls for the tight ends:

Not including injuries, do you think Gary Barnidge can be the Cleveland Browns' starting tight end by the end of the 2013 NFL season? 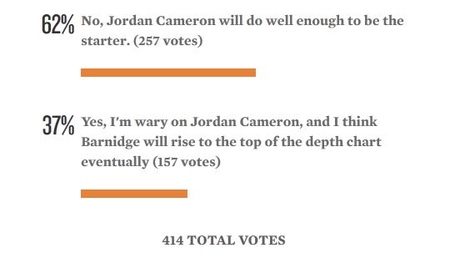 While Jordan Cameron still had the majority of fan support, this is one of the few positions on the team this year where a good portion of fans think a relatively unknown player in Gary Barnidge could surprise everyone and be thrust into the starting lineup.

The ideal scenario would still be if both Cameron and Barnidge get a good amount of reps as receivers as a two-tight-end threat, although I don't think Rob Chudzinski or Norv Turner have really gone that direction in the past: they've pretty much used their top guy as a true top guy. We'll see how much Barnidge's familiarity with Chudzinski helps him. If he is getting some first-team early on in training camp, then we'll know something is up. [Read Part 1 of the TE Preview]

Do you think Dan Gronkowski can unseat Kellen Davis for a roster spot as the primary blocking tight end? 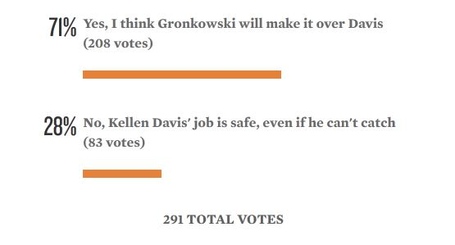 This is more proof that no one has any idea how things are going to unfold at the tight end position for the Browns this year. While I think there's a compelling argument to be made for Dan Gronkowski over Kellen Davis, I don't think an established blocking tight end is going to be unseated by a tight end who has never sniffed regular playing time at the NFL level. [Read Part 2 of the TE Preview]

Starting on Tuesday, we will shift our training camp preview to the linebacker position -- training camp will be here before you know it!