AFC North - Why We Rule

Share All sharing options for: AFC North - Why We Rule 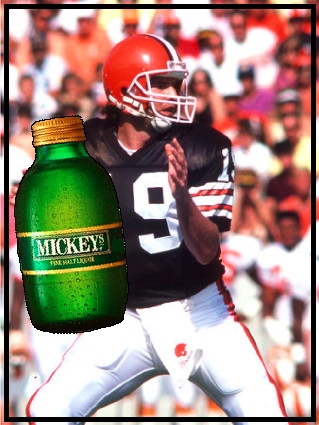 Our conquest of the AFC North has begun with a bang, and I don´t mean the drunk Bernie Kosar´s embattled former NFL quarterback face planting on the broad cast booth floor with a final Cleveland TV market broad casting brain wreck thud. I´m sure Dr. Spin Doggle can fax you the bloop-print, representing the inside of our favorite QB´s cranium, already presented to a discerning international audience on CNN. Don´t be surprised, that before and after, look exactly the same, first of all. I think the general yellow area with the small green area at the core is a good sign, like on traffic lights, I assume the green means he is cleared to still go do stuff. Like sue Jeff Fisher, yeah the guy in this video going crazy on the sidelines with the head set on, yelling "Kill! Kill! Kill!".

The action on the field was phenomenal. First Brandon Bogotay dominated one, smashing a 25 yard FG. Then Dion Lewis scored! Then Travis Benjamin proved he is the fastest on the Browns, by returning a punt for 91 yards, it was the other team´s turn, but they gave a TD. Then Chris Givens on the other team was givens the ball from Sam Bradford finally, and he subsequently scored. Lets speed this up. Shayne Graham can really kick, 41 yards, and we score! The Rams aren´t in this, they kick two more Field Goals. But us, in the 4th quarter, Brandon Hoyer tosses the ball to Cordell Roberson, and we score! Top quarterback? Brandon Weeden with one score! Top RB? Brandon Jackson. But, no score. Top WR? TE Jordan Cameron. But, no score. Top Defender. Akeem Auguste! But, no score. But, in the end, we scored enough to beat St. Louis, 27-19. Brandon Weeden passes out the drug money. So we can celebrate!

The Bengals show a really balance Offense against the Falcons. Lead passer: Former Browns QB Josh Johnson. Lead rusher: Josh Johnson. Top scorer: Ohio State´s Dane Sanzenbacher, who is like 7th string. He scores on a punt return and a pass. Their starters on Defense, like the Steelers, have like 1 tackle each. But the Falcons have a guy named Paul Worrilow, who had 12 tackles. Despite running the ball straight at him, it´s to no avail. The Bengals must win this comparison in the Georgia Dome, 34-10.

The Ravens must not know it´s Pre Season. They smack the s*** out of the poor Bucs back-ups, 44-16. Tyrod Taylor looks good with two TDs. They feature Damien Berry and Anthony Allen at RB. And LaQuan Williams and Marlon Brown get the most targets at receiver. While the new TE Visanthe Shiancoe grabs three of five passes. It looks like they featured their starters on Defense a bit more than, like the Steelers. Sooo...