Defending the Seams in a Single-High Coverage Part II

Share All sharing options for: Defending the Seams in a Single-High Coverage Part II

In my last post, I quoted Nick Saban describing his quandary when trying to defend "spread" formations. It goes something like this:

So, how do you solve this problem? Necessity is the mother of invention, and after seeing his highly successful 1994 defense torn apart (by the steelers, no less) Saban knew he needed something fresh.

Positioning the curl-flat player underneath and outside of the #2 receiver was a part of the answer. But the answer to the larger puzzle was what is known as pattern match coverage--a mix between man and zone. Against a "2x2" formation Saban's pattern matching defense is called "Rip/Liz." (This could be any formation with 2 receivers to each side.)

The names "Rip" and "Liz" tell the defense which side the safety is rotating down on. "Rip" = right, "Liz" = left: 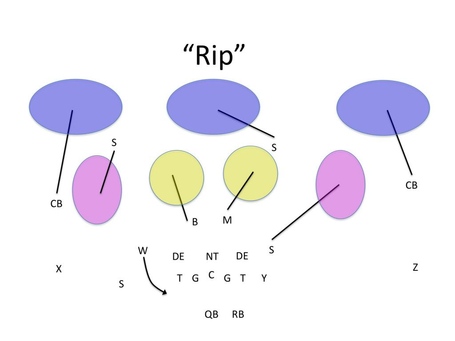 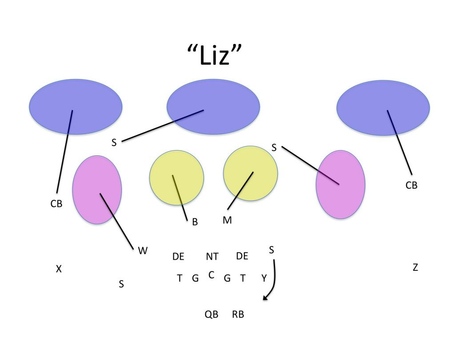 The safety opposite the call becomes the deep middle 1/3 player. The safety to the call and the OLB away from the call are the curl-flat players. 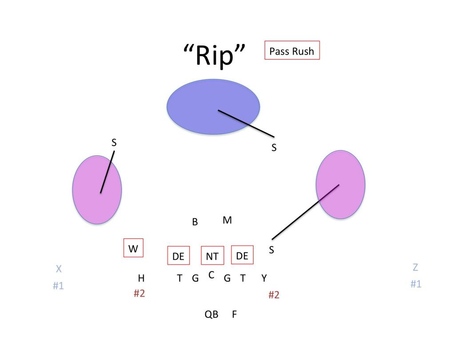 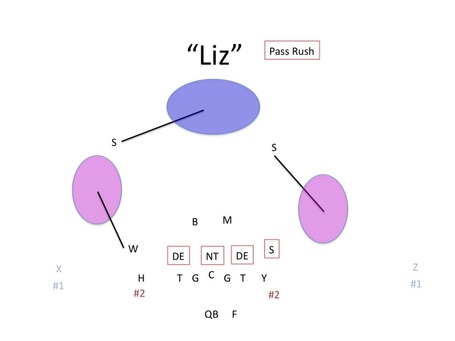 The Corners and Curl/Flat players simply convert to man coverage if their receiver pushes vertical off of the line. For the CB, this is the #1 receiver, for the Curl-Flat player, this is the #2 receiver. 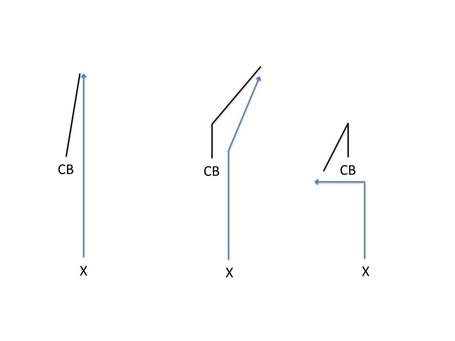 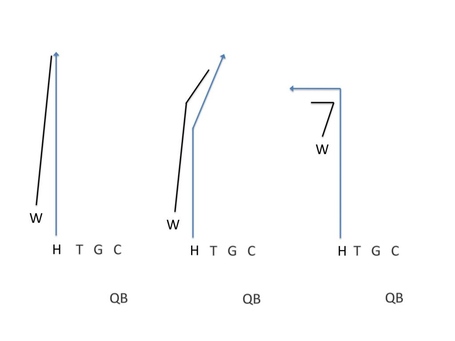 If #2 stems outside(i.e. NOT vertical), the Curl/Flat player will look to expand wider, underneath #1 in the curl area. He will remain in position to come up to the flat if the throw takes him there. 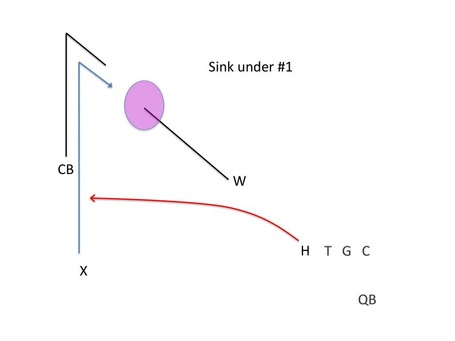 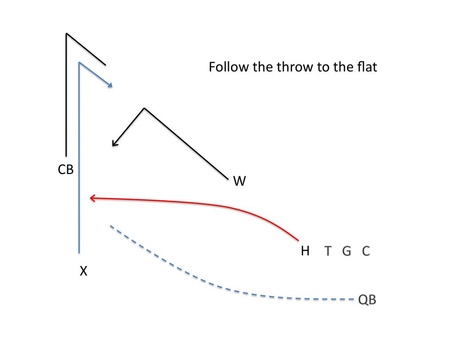 The inside linebackers are playing what are called the "#3 receiver/hook" zones (3RH if you are a coach, yellow zones if you are a Madden player). They are playing off of the flow of the back; if the back releases immediately to the flat on their side, they jump his route aggressively. If the back flows away from them, they will gain depth and defend intermediate passes over the middle. 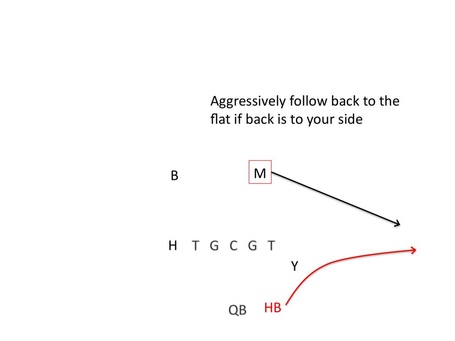 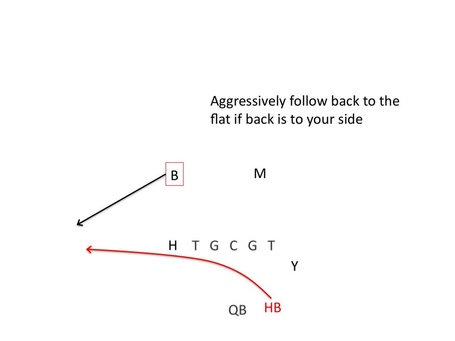 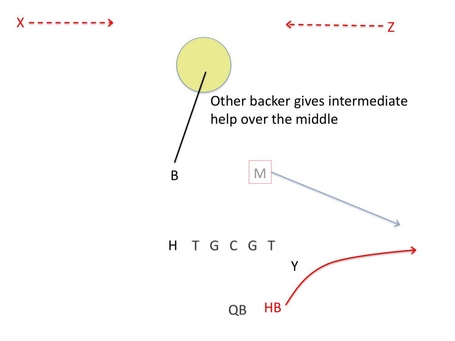 Note that the ILBs will either be covering the #3 receiver (the back) or zoning off in a hook zone. Hence, the name "3 receiver/hook player"

If a receiver stems inside, the defense needs to make an "Under!" call. If #1 stems inside the corner will give the under call and stay outside/over the top of #2. 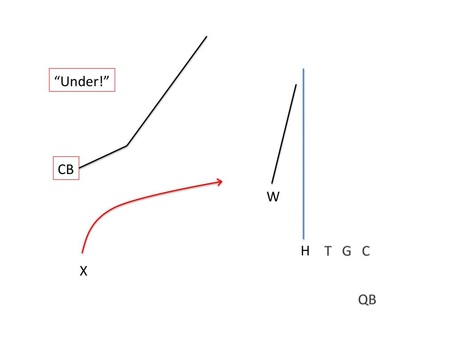 If #2 stems inside, the Curl/Flat player will give the "Under!" call and expand to the curl area and then the flat if the back shows. 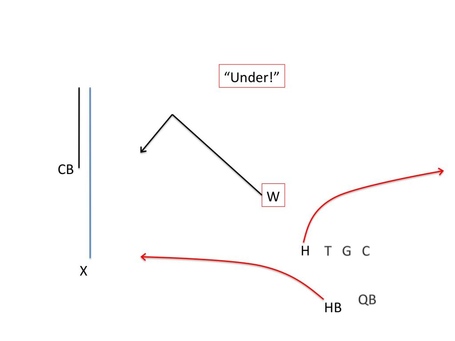 The goal here is to be able to pass a receiver stemming inside to the defenders waiting on the other side of the formation. Sort of like switching on the pick-n-roll in basketball, the "Under!" call allows the defense to gain some advantages of zone coverage while still staying tight to receivers like man coverage.

The inside linebacker away from the "Under!" call will jump the shallow cross. 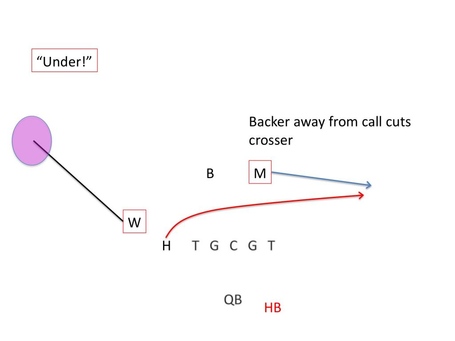 The other ILB will gain depth and look to disrupt intermediate routes. Note that this is almost exactly the same as a back releasing into the flat to that side: this defense treats the back's release into the flat and the shallow cross the same way. 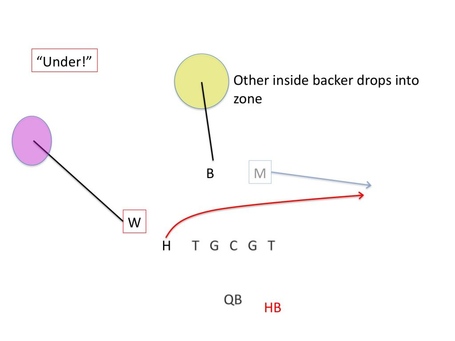 The inside linebackers are not as worried about the back when there is an "Under!" call because of spacing: one defender will be in the same area as both the back and the shallow crosser. 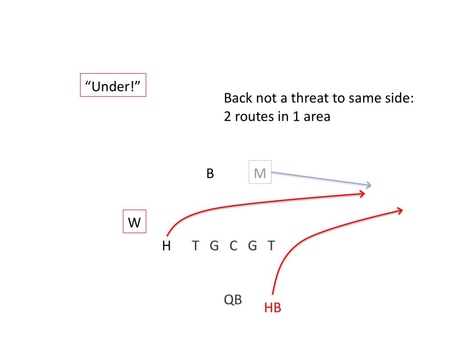 With the "Rip/Liz" pattern-match adjustment, the defense is looking to aggressively match the patterns or the distribution of the receivers. When executed properly, the defense will be able to cover receivers tightly like man to man coverage, but while being able to pass off receivers like in zone coverage.

With this concept of pattern matching, single-high defenses can bring an 8th man into the box to stop the run. With tight coverage into the seams, Saban's "break on the ball" problem is solved, and with the ability to switch underneath, cover one side of a receiver and receive help to the other side, matchup risks are significantly mitigated.

Here are a few examples of the Rip/Liz adjustment against real pass concepts: 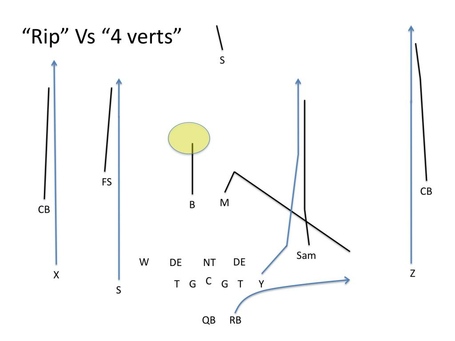 Note that all routes except the back have vertical stems, so the curl-flat players and the corners are manned-up.

4 verts represents the worst-case scenario for a single-high defense. With tight coverage into the seams and intermediate and deep help, the defense can force a very tough throw. 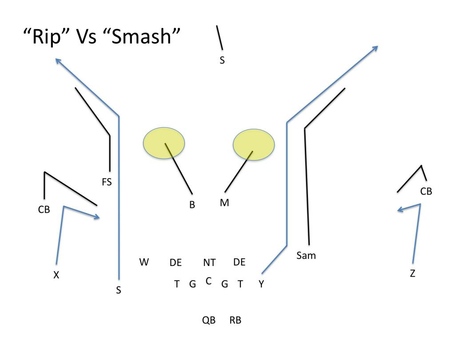 Again, there are 4 vertical stems, so again the curl-flat players and the corners are manned-up. 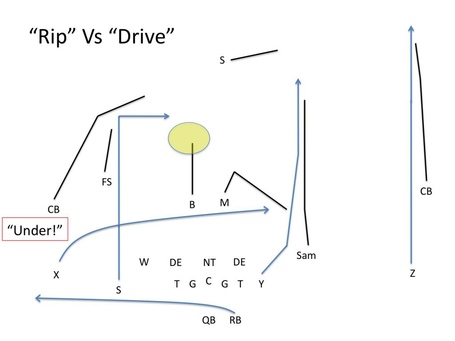 With an "Under!" call from the right, the LILB cuts the crosser and the RILB zones off. The other 3 receivers are vertical off of the line, so their coverage converts to man.