Lions vs. Browns: Stories Behind the Post-Game Embraces

Share All sharing options for: Lions vs. Browns: Stories Behind the Post-Game Embraces

We see them all the time after the clock reads all zeroes: the post-game handshakes. As I was watching the end of the preseason game between the Detroit Lions and the Cleveland Browns, I saw QB Brandon Weeden happily talking to TE Brandon Pettigrew, which led me to wonder, "why Weeden and Pettigrew?" Is there a connection between the two?

That sparked my interest in going back and taking a second look at each of the post-game embraces aired by WKYC, and if there was any rhyme or reason to the participants in the embraces. First, in the lead-in picture at the top of this post, you can your standard head coach embrace between Rob Chudzinski and Jim Schwartz, where the two are surely thinking ahead to the Week 6 encounter that will take place in this same stadium. 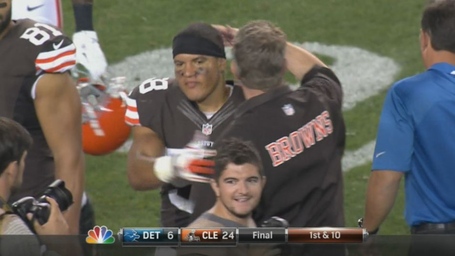 You dream of it, but when it actually happens, you wince with glee on the inside. Here comes backup inside linebacker L.J. Fort, strolling amidst the crowd, when he suddenly comes face-to-face with Chudzinski. The head coach pats Fort on the back of the head, and Fort keeps his composure and plays it cool by giving his coach a tap on the shoulder. As this is happening, Fort probably feels confident that his odds at making the final roster just shot up a couple of percentage points. Fort appeared to be the only player who got the Chudzinski "slap in the back of the head" embrace. 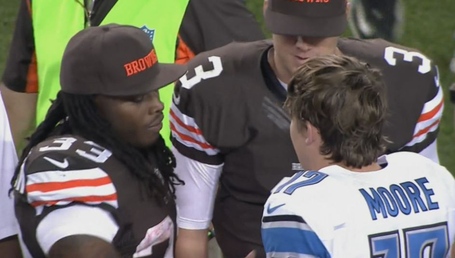 RB Trent Richardson doesn't really seem too interested in QB Kellen Moore, but he acknowledges him nonetheless. What's the connection? Both men were strong candidates for the Heisman Trophy in 2011 at one point, an award that ultimately went to Robert Griffin III. Richardson finished third, and Moore finished eighth. 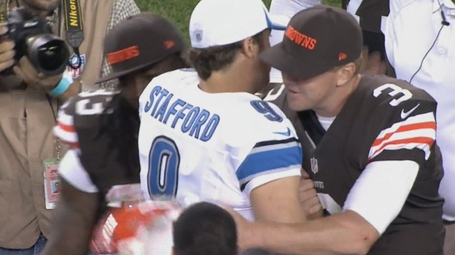 Embraces between starting quarterbacks are about as common as head coaching embraces -- there doesn't need to be a previous connection for it to happen. Brandon Weeden might have cautioned Matthew Stafford here, saying something like, "I'm going to sue Suh is he hits me late again," to which Stafford replied, "I'm just pissed that we didn't win the barge back." 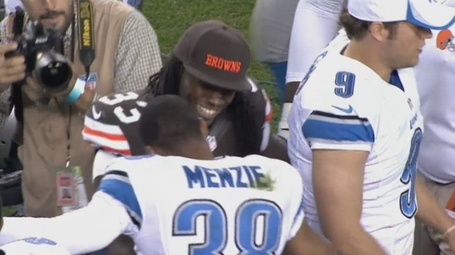 For as mellow as Richardson was upon seeing Moore, he seems ecstatic to run into some guy named Menzie. "Surely, these two guys had to play together in college," I thought. Sure enough, they did. The other player is CB DeQuan Menzie, who played with Richardson at Alabama. Menzie was a fifth-round pick by the Kansas City Chiefs last year, but was waived by them in May and got picked up by the Lions. 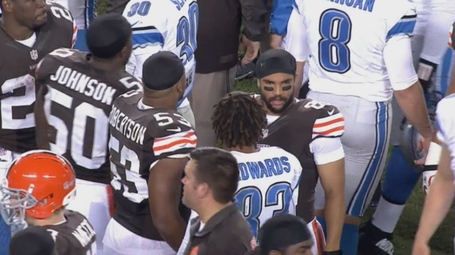 Here is a large scrum of players surrounding each other, but most of them are just walking around aimlessly. Two players, No. 86 of the Browns and No. 83 on the Lions, stop to sort of talk to each other. The only significant connections between the two? Both guys have "Edwards" on the back of their jersey, both guys are wide receivers, and both guys are virtually unknown. 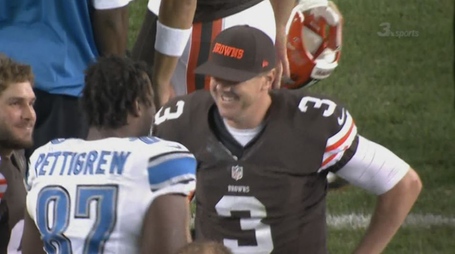 Here's a nice shot: QB Brandon Weeden talking to TE Brandon Pettigrew. To the left, you can also see WR Josh Cooper in the conversation. As soon as I saw Cooper there too, I suspected that Pettigrew must have played for Oklahoma State in college, and indeed he did. Pettigrew was drafted back in 2009, so his final season at Oklahoma State came in 2008. Weeden and Cooper were redshirts in 2007, and both played in maybe one game in 2008. That's the connection to Pettigrew, though. 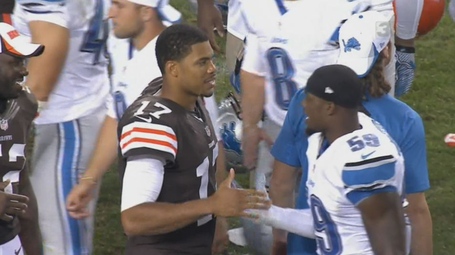 No. 59 on the Lions is a second-year linebacker from Temple by the name of Tahir Whitehead. Not only does 9-year veteran QB Jason Campbell seek out a handshake with Whitehead, and can see 8-year veteran LB D'Qwell Jackson to the left, already getting his hand and smile ready for an embrace with Whitehead. Campbell and Jackson attended Auburn and Maryland, respectively, and are too far apart in terms of years to really have known Whitehead from college. These are really the only mysterious embraces all game -- what makes Whitehead so special that our veterans are lining up to meet him? 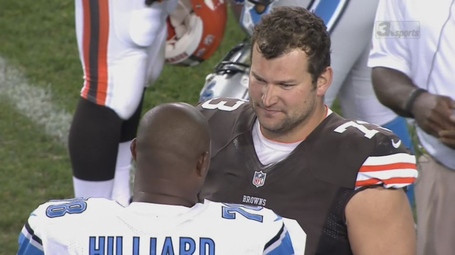 Lastly, we learn that offensive tackle Corey Hilliard, despite being a backup, is one of the wisest lineman in the NFL: he seeks out the best player on the field and of this century in the great Joe Thomas. Hilliard even bypassed the opportunity to join the discussion with his alumni (Hillard also attended Oklahoma State).

In all seriousness, the connection is this: Hillard was signed by the Browns late during training camp of the 2009 season, and later made the team's practice squad as an offensive tackle. I'm sure Thomas and Hilliard were reminiscing about the good old days of Eric Mangini's practices, including what Nate Jackson said about them in Cleveland Scene. In fact, Hilliard and Jackson were two of the three players signed on that glorius day of August 25, 2009. The other player signed that day, S Tra Battle, played four years in the UFL after that.

Hilliard never got very good reviews in limited time with the Browns back in the day. Even mooncamping had him No. 1 on his "nay" list in 2009.

Lions vs. Browns: Week 2 of the NFL Preseason