Share All sharing options for: Barkevious Mingo in Coverage: The Curl-Flat Player

If history is any indication, we will be primarily a single-high defense under new defensive coordinator Ray Horton. Coaches in the Dick LeBeau/Dom Capers tree have been single-high for decades, and Horton played a ton of single-high in Arizona. "Hybrid" players like first round pick Barkevious Mingo are usually OLBs in this system, where they can rush the passer but also have to drop into coverage.

The weakness in a single-high zone defense (one with a single deep safety and another safety up closer to the line of scrimmage) are down the seams, which are an area of the field starting at about 8 yards deep of the line of scrimmage and extending from the outside of the hash to a few yards inside the numbers: 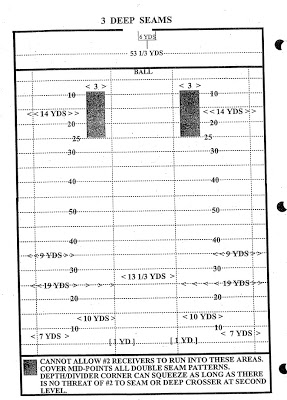 Defenses often find themselves in a quandary when trying to defend these seams and still stop the run. Here is an account of this phenomenon from former Browns DC and defensive mastermind Nick Saban:

"We got to the point where, [...] when everybody started going spread we couldn't play 3 deep zone. This started with the Cleveland Browns, I was the defensive coordinator in the early 90s and Pittsburgh would run 'Seattle' on us, four streaks. Then they would run two streaks and two out routes, what I call ‘pole' route from 2x2. So we got to where we could NOT play 3-deep zone because we rerouted the seams and played zone, and what I call "Country Cover 3" [you have to] drop to your spot, reroute the seams, break on the ball. Well, when Marino is throwing it, that old break on the ball sh*t don't work.

We got to where we couldn't run cover 1 - So now we can't play an 8 man front.
The 1994 Browns went 13-5, we lost to Steelers 3 times, (twice in the regular season, once in the playoffs) lost 5 games total. We gave up the 5th fewest points in the history of the NFL, and lost to Steelers because we could not play 8-man fronts to stop the run because they would wear us out throwing it"

These two route combinations haunted those ‘94 Browns. Saban got burned through the air because a "spot dropping" zone defense could not adequately defend NFL caliber quarterbacks. When players dropped to a spot or a landmark on the field in a zone defense, quarterbacks and wide receivers were too good at completing passes into the seams: "that break on the ball s*&t don't work."

To stop receivers, you first have to identify them. To do this, defenses number receivers from the outside-in. Contrary to casual terminology, the #2 receiver refers to the positioning of the receiver in the formation or the route distribution--not the second best receiver on the other team.

#1 is the furthest outside, #2 is inside him, and #3 is further inside or a back coming out of the backfield. As you can see from the 4 verts and "pole" plays, dealing with the #2 is key to a single-high defense's success. To deal with the #2 receiver defenses call on the Curl-Flat player.

"Curl-flat", "Seam," "SCIF," or "Bronco" are synonyms for this position. If you play Madden, this player is playing the magenta zone. In real life, these are players like KeKe Mingo.

To stop the #2 receiver, the Curl-flat player must disrupt routes headed into the seam by rerouting verticals by #2: 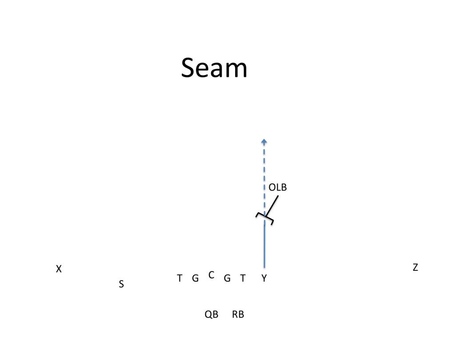 If there is no threat to the seam--that is if the #2 either stays in to block, releases into the flat, or releases shallow across the formation--the C/F player heads to the curl area underneath the #1 receiver: 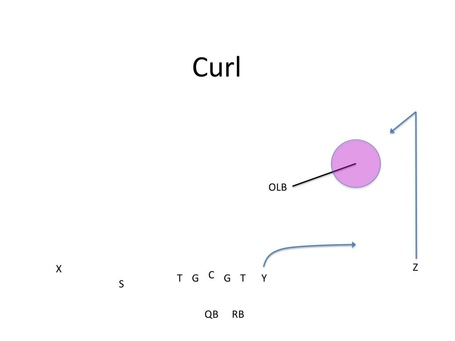 Finally, they are to tackle players who catch the ball in the flat. Seam, then curl, then flat: 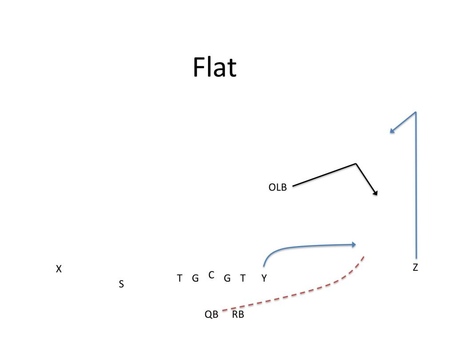 The term "SCIF" usually implies that the player protecting the seams will be an inside-out player. This means that they will attempt to push the #2 wide, away from the center of the field. 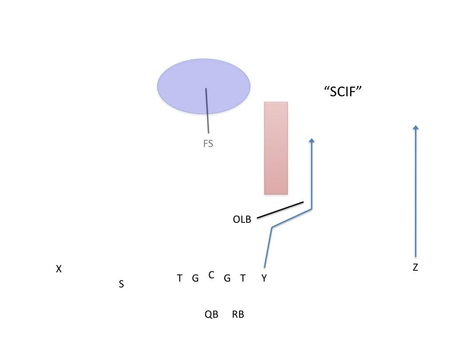 In the Dick LeBeau system (and a Nick Saban system), a "Seam" tehcnique is used in lieu of the "SCIF" technique. While more or less the same, the "Seam" player will attempt to funnel #2 inside. He will still be responsible for #2 if he is vertical, but while maintaining outside/underneath leverage. The "seam" player is outside-in. 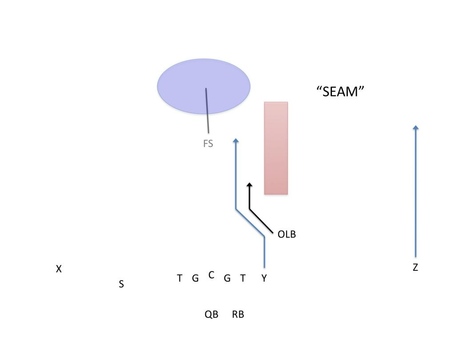 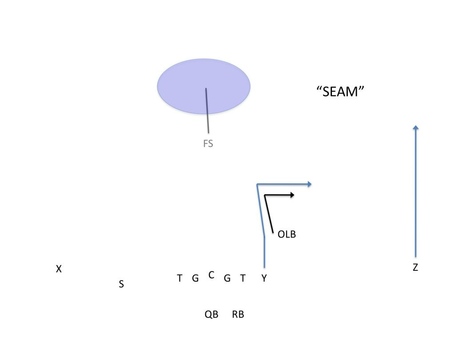 By putting the curl-flat player in this outside/underneath ("trail") position, teams who use the "seam" technique can effectively defend the #2 receiver against 4 verticals and the "pole" combination. Against a vertical release off of the line, the C-F player will re-route #2 to the inside and run outside/underneath him. If the receiver breaks out, the C-F player can stick with him easily.

With this tactical move (within a strategic adjustment), 3-4 teams can defend the pass and play an 8 man front. Players like Barkevious Mingo will specialize in rushing the passer, but they'll also play this critical role in coverage.

In my next post, I'll explain the larger strategic adjustment Nick Saban made to play a mix between man and zone coverages. Why settle for "or" if you can get the advantages of both types of coverage?