We have a total of four fantasy football leagues this year at Dawgs By Nature, but we'd love to have other guys get involved in the fun too! Heck, our Panthers affiliate has created like 14 leagues over at their site on Yahoo, so there's no reason why we can't get a couple of more in. If you are interested in heading up a league, click here to set one up on Yahoo and then solicit new members to join, either in the comments below or by starting a new FanPost.

The Official DBN Fantasy Football League held their draft Sunday night, so now it's time for you guys to vote on who had the best draft. And, if you don't care to check out everybody's team, make sure you at least look at mooncamping's team. This is his first time ever doing fantasy football, and the league will be worth it just to see how he does throughout the season.

FYI, when evaluating these rosters, our league starts 1 QB, 2 RB, 2 WR, 1 TE, 1 RB/WR/TE, 1 K, and 1 DEF. The scoring is pretty much the same as the standard Yahoo leagues. The teams are listed below based on their first-round draft order: 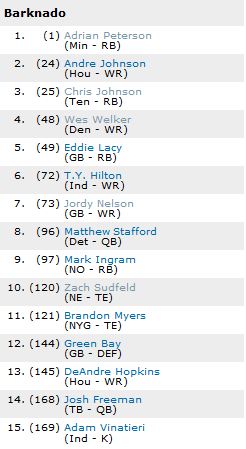 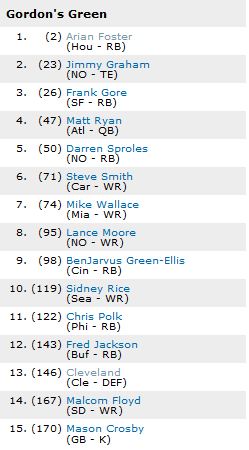 Pokorny's Take: I remember reaching for Jimmy Graham in the second round last year too -- it was the worst decision I could've made, and notthatnoise will learn that too. I can't believe how pathetic the wide receiver situation is -- Steve Smith is fine, but Mike Wallace? Lance Moore? Sidney Rice? And why was Chris Polk even drafted? I hate Frank Gore as a backup running back to Arian Foster too. Two drafts, two disappointments so far. 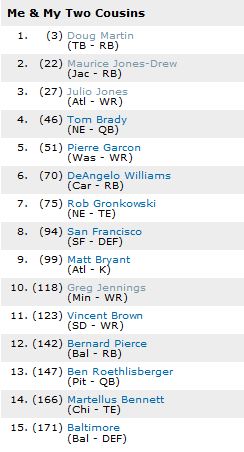 Pokorny's Take: I don't even think TheDriveStillHurts ever bothered showing up to the draft, and the output of his roster shows. The top two receivers are fairly strong here with Julio Jones and Pierre Garcon, but you have to wonder if this is the year Tom Brady finally doesn't have a stellar year offensively. 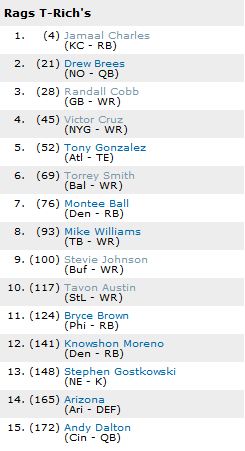 Pokorny's Take: Not bad, Zach. With the coaching changes in Kansas City, I think Jamaal Charles is due for a breakout year. Aaron Rodgers is always going to throw a ton of touchdowns, and Randall Cobb will be catching the majority of them. I'm not a fan of Victor Cruz fantasy-wise this year, but the fourth round is decent value for him. Montee Ball in the seventh round is a good pick if he ends up starting -- worth the risk. If he doesn't start, though, this team only has one running back, which can be troubing. 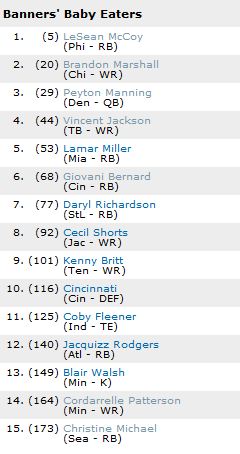 Pokorny's Take: It was a little frustrating having Krupka drafting on one end of me. I was set to take LeSean McCoy, Daryl Richardson, and Blair Walsh, but all three times I was one pick away from them, he took them. My team would have been a lot better off with those guys, I think. Krupka also picked some guys who I was fans of in terms of fantasy value -- Peyton Manning, Giovani Bernard, and the Bengals' defense. This isn't the greatest roster, but with some fine-tuning in waiver wire moves, I can dig it. 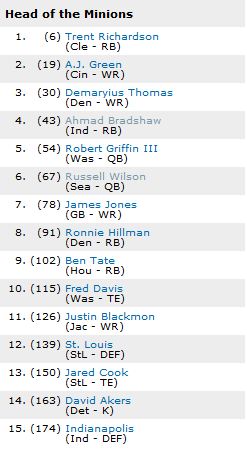 Pokorny's Take: Overall, I came away pretty pleased with my draft. I loved my first three picks -- I think it's the best start to the draft out of anyone in the league. My season could be defined by my fourth-round pick, Ahmad Bradshaw. A Colts running back is ripe to put up big stats in that offense, but Bradshaw has had injury concerns. If he can start the whole year and be productive, I've written my ticket to the championship. I definitely took a risk by drafting two quarterbacks so early, but it's a trend I've developed over the years.

This is one of the first times I've gone with mobile guys, so we'll see how it goes. I was stunned to see James Jones available at pick seven. I feel like I may have wasted my eighth-round pick on Ronnie Hillman, given Denver's running back situation. I picked Ben Tate for the second straight year fairly high. I defend the risk because if Foster goes down, I immediately have one of the best fantasy backs in the NFL. I like my potential at tight end, with Fred Davis coming back from injury. David Akers is healthy and will revert to one of the league's top kickers. The Colts face the Raiders in Week 1, so kudos to me for doing some advanced scouting there. 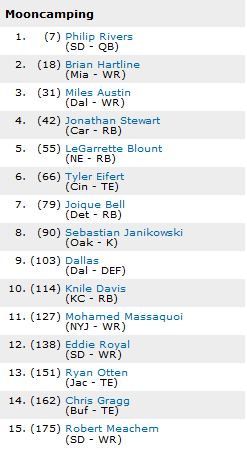 Pokorny's Take: Words can't express how awesome this lineup is. 11 people in this league are going to be scared to death when they face mooncamping, wondering if they will be the unfortunate person to face him the week when Philip Rivers has a career day, Brian Hartline goes over 200 yards again, LeGarrette Blount becomes Belichick's favorite new toy, etc. 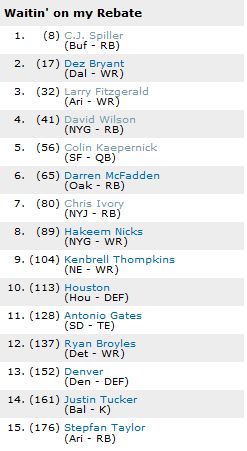 Pokorny's Take: How did Matt Wood do? Not so hot -- I think he was too busy coming up with a Haslam-hatin' nickname. Dez Bryant is overrated. The Giants' offense is a mess. The Bills will never figure out how to utilize C.J. Spiller properly. Darren McFadden? I can't believe he went in the sixth round, and not in a good way. Chris Ivory will break something by his second game. I do like the pick of Larry Fitzgerald -- Carson Palmer will help him pad his stats this year, even if its in garbage time. Other than that...yuck. 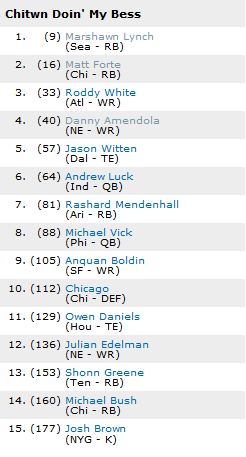 Pokorny's Take: These days, Matt Forte is one of those running backs I just stay away from. I don't know why Jason Witten is worth a fifth round pick, or why an Arizona running back is worth a seventh-round pick. Those two reaches stand out. Michael Vick and Anquan Boldin are great later picks to make up for that, though. This roster seems too middle-of-roadish. 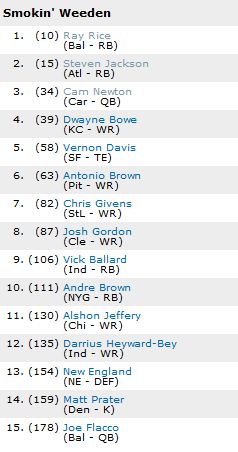 Pokorny's Take: We saw Cameron Newton come on strong at the end of last season, so I have high hopes for that pick. I think there is some potential this team could be a big hit if Steven Jackson delivers for Atlanta (unlike Michael Turner a year ago), Dwayne Bowe thrives with Alex Smith, and Chris Givens becomes a breakout guy for the Rams. That's too many "ifs" though, and there really aren't very many proven commodities to make up for that. 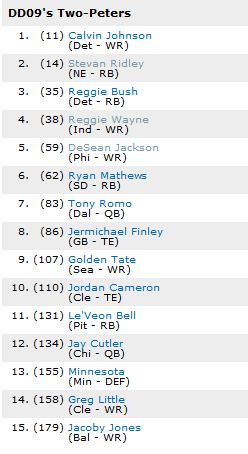 Pokorny's Take: Ah, our returning champion. How nice of him to decide to throw the competition this year. Besides Calvin Johnson falling into his lap, I have to wonder if DaveDawg09 was drunk while he did this (hat tip, Peter King). The Patriots get a new flavor at running back every year, so that makes Steven Ridley worthless. Reggie Bush was surprisingly good in Miami last year, but Detroit running backs fail every year. Reggie Wayne will get a lot of targets, but T.Y. Hilton is the breakout star in Indy. Tony Romo is the savior at quarterback? Only if you want no consistency from week-to-week. Jordan Cameron is probably the best pick here, and that says a lot about the quality of this roster. 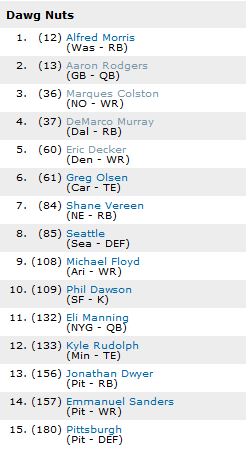 Pokorny's Take: Creative team name. Alfred Morris was a waiver wire pick up for me last season, so it's great to see him going in round one this year. Dawg Nuts' draft started off really strong with Morris, Aaron Rodgers, and Marques Colston. Those three picks almost rival my draft. The fourth-round pick is similar to mine too -- his season may depend on it. I have more faith in Bradshaw than I do DeMarco Murray, though. He did make a couple of nice niche picks (Seattle's defense, Phil Dawson), but we'll see if that's enough to matter by the end of the season.

Be sure to vote on whose drafts you like the best, and let us know your thoughts in the comments section below!