The Browns couldn't get out of Baltimore with their first W of the season. The defense looked good again, but the offense...not so much. Let's take a look.

Well, that sure was something. Another weekend has come and gone, and the Cleveland Browns have as many wins as they did to start the year. Zero. Not to say 0-2 is a terrible hole, but the Browns certainly hoped to do better. For starters I picked Cleveland to win against Miami. I didn’t think we could knock off the defending Super Bowl champion Baltimore Ravens at home, but they were right there to do it. Cleveland’s offense has been enigmatic early on this season, but they’ve been competitive through two games. If the offense can get it turned around, just maybe we’ll see some W’s added to the win column. 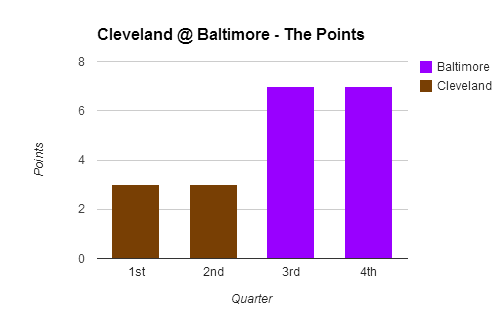 Things got off to a pretty good start for Cleveland. Baltimore was able to establish a decent drive that ended in a Justin Tucker missed 50-yard field goal. That set the Browns up with good field position which they ultimately took advantage of. Brandon Weeden connected with Jordan Cameron on Cleveland’s first offensive play for 53 yards down to Baltimore’s 7 yard line. The Browns tried to punch it in with Trent Richardson, but ultimately couldn’t and Billy Cundiff added a 21-yard field goal to give the Browns a 3-0 lead early.

The Browns and Ravens went back and forth throughout most of the first half, trading punts and field position. The Ravens did get near the red-zone late in the 2nd quarter, but Tucker missed another field goal, this time a 44 yarder. Brandon Weeden hit Jordan Cameron once and Greg Little twice on the ensuing drive that set the Browns up with a 51-yard field goal attempt with very little time left in the first half. Cundiff would drill the attempt and give the Browns a 6-0 halftime advantage.

Cleveland got the ball to start the 3rd, but ultimately saw their first drive fizzle out. Baltimore responded by finding the endzone on a Bernard Pierce 5-yard touchdown run. Baltimore would take just a 1-point lead into the 4th quarter, but the Browns failed to capitalize and ultimately the Ravens added another TD early on in the 4th. 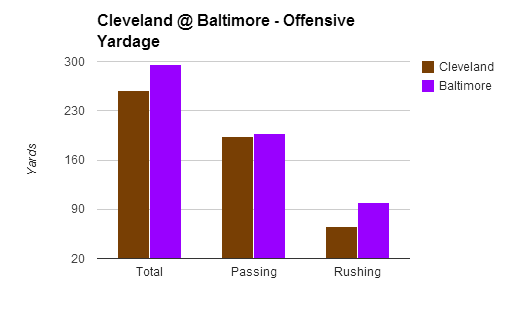 Much the same as the Miami game a week ago, the tale of the tape offensively was pretty even. And while it appears fairly even, the key for the Browns was the 2nd half offense (or lack thereof). The Browns gained just 85 yards in the 2nd half. The Browns 1st half offense wasn’t anything to write home about, but the 2nd half was just bad.

And much like last week, the Browns defense was solid for the most part. The rush defense looked very good yet again. The Ravens ended up just shy of 100 yards, right at 99 yards rushing. That’s pretty good considering they faced Ray Rice and Bernard Pierce. For perspective, the Ravens gained those 99 yards on 36 carries for just 2.75 YPC. We’ve talked about it for 2 weeks now, but this Browns front-seven has been very solid against the run early this season.

One thing that has to get better for this team to see real improvement, is the offensive line. The Browns were almost dead even with the Ravens in terms of passing yards, but the key for the Ravens was their ability to sack the quarterback. Brandon Weeden was sacked 5 times today, totaling -39 yards on those plays. Weeden was sacked 6 times last week, so for now an offensive line that was touted as one of the best coming into the season, has looked like one of the worst. 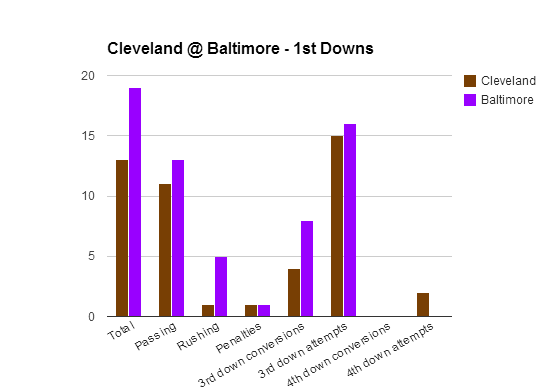 The Browns also were not able to convert on both of their 4th down attempts. One of those 4th down attempts was a pass to Jordan Cameron that was completed, but short of the first down marker. Rob Chudzinski challenged the spot, but it was ultimately upheld. By my estimation, that was the closest you could physically get to a 1st down. The other was a Jason Campbell underhand toss that would end up Cleveland’s last offensive play.

The Browns were facing a tall task going up against the defending Super Bowl champs in Baltimore. For the first half of the game they seemed up to the challenge. In the end they weren’t able to deliver a W, but there were still positives. The defense continues to be the bright spot and will be something the Browns will have to use to their advantage to secure victories. I’m excited to see what the Browns look like next week when they head to Minnesota. The Vikings also sit at 0-2, but gave the Bears a hell of a run Sunday. Obviously facing Adrian Peterson is no small task, but that’s one of the reasons I’m most excited for this game. As we’ve said for 2 weeks, this front-seven has looked great against the run. It’s hard to think of a better test for this front-seven than facing off against Adrian Peterson. The Browns also get Josh Gordon back this week, so it’ll be great to see what he can do Sunday. Ultimately the Browns need to improve week by week, the defense has shown it can do that. Now it’s the offense’s turn to take a step in the right direction.