Cleveland Browns Down and Distance Analysis

The Browns offense has been abysmal the first two weeks. Today I'll dig into the down and distance numbers to see if I can figure out why.

Share All sharing options for: Cleveland Browns Down and Distance Analysis

It's no secret that the Cleveland Browns offense has been terrible for the first two weeks of the 2013 season. No one expected the Browns to be one of the best in the league, but it is still puzzling that a team that has managed to move the ball at times has only managed to score 16 points through two games. I believe a large part of the problem is the team's performance on third downs. The Browns are 5 for 29 on third down, which is last in the league. That's a truly awful number. It's about 22% below league average. But third downs don't just appear out of thin air. No team starts a possession in third and ten. In order to figure out what is going wrong, we have to take a look at what happens on first and second down as well.

Ok, so immediately we notice that the Browns haven't attempted a single third down run. That isn't as crazy as you think, but I'll come back to that later. For now let's focus on first down. On first down the Browns are averaging almost 5 yards per play. Most coaches would be very happy to gain five yards on every first and ten. We also see that while the Browns pass much more than they run, there is only a difference of ten plays. First down is no problem, the offense is staying ahead of the sticks.

Second down is where things deteriorate. The Browns have passed the ball 23 more times than they have run on second down. That type of unbalanced play calling would normally annoy me, but after looking at the average yards per rush on second down it's hard for me to blame offensive coordinator Norv Turner for neglecting the run. I mean, ouch, that's bad. When you compare the relative success of running and passing on second down, it's no wonder the team has decided to air it out. The Browns passing attack is actually at its best on second down averaging a healthy 5.76 yards per attempt (this includes sacks).

Before we jump to third down, I'm going to present two histograms that will help explain both why the Browns haven't had a single run on third down and why I believe their percentage is so low. The following charts show the breakdown of how many plays were run at a particular down and distance. The column labeled "10" actually includes any plays where the distance to go was greater than or equal to ten yards. 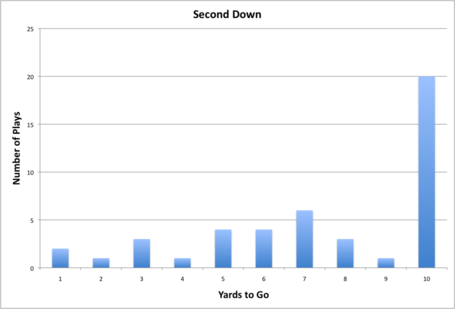 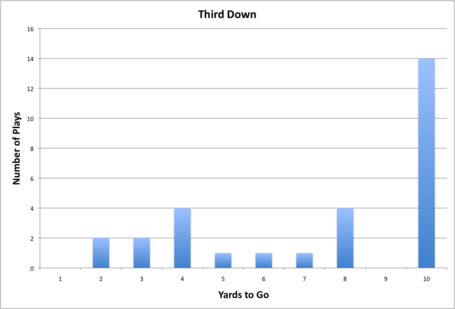 On the whole these two charts look very similar. However, the important thing to look at is what happens in the 4-7 yard range. The Browns have run very few third down plays from this range, which means one of two things. Either they're converting second down plays from this distance or they're being pushed back. In reality, it is a combination of these two. The Browns have been able to convert through the air on second down plays from this "medium" area, but at the same time there have been many negative run plays and a few sacks here as well. Also, this lack of 4-7 yards plays on third down means the offense isn't making many positive plays in second and long situations. Too many passes are being attempted in these situations, resulting in third and long plays when those passes fall incomplete. I believe a commitment to running the ball more on second down would result in the offense getting into more manageable third down situations in that middle range. Speaking of which, the Browns have only had four third and short situations all year. Most teams choose to throw on third down if they need more than a yard or two, and since the Browns have only been in third and less than three twice all season, it isn't hard to see how they've ended up without any rushing attempts on third down.

The point, though, is this: The Browns' struggles on third down are amplified by poor second down results. Yes, the third down percentage is awful no matter what situation they are in, but the team isn't doing enough on second down to set themselves up for success. I said earlier that I think a renewed commitment to the run game could help ease this problem, but the Browns are at their worst so far this year when running the ball on second down. That 1.18 yards per carry needs to improve drastically for the team to be able to put themselves in easier situations. No offense thrives when they are in third and long as often as the Browns. While this analysis has helped identify a contributing factor, I still don't believe the third down struggles can be placed entirely on the earlier downs. The Browns average just over 2 yards per play on third down, and that simply won't cut it. The team may be making things harder than they need to be, but the results are still poor even accounting for the situation. Norv Turner and Rob Chudzinski need to figure out a way to be more productive on third down and they need to do it fast.