Cleveland dominated the Bengals behind a great defensive performance and consistent play again from Brian Hoyer. The Browns move into a tie for the AFC North lead. How sweet does that sound?

On September 18th the Cleveland Browns traded Trent Richardson to the Indianapolis Colts. All the Browns have done since then, is go 2-0. The Browns beat the division-rival Cincinnati Bengals on Sunday to improve to 2-2 on the season. While it's still very early, the "Cleveland is tanking" story line has been tossed to the side as quickly as Trent Richardson and Brandon Weeden were. Not only did Brian Hoyer cement himself as the starting quarterback (for now) on Sunday in what was another thrilling win (his 2nd as a starter), but the Browns moved into a tie for 1st place in the division.

No one gave the Browns a chance at the start of the year. And everyone laughed at the Browns when they traded their #3 overall pick from a year ago after just 2 games. The Browns have thrown that all back in their faces. They might not be getting the respect they deserve, but they don't care. The Browns will have a short week this week to get ready for a national TV broadcast on Thursday against the Bills. If they can put together another game like they have the past two weeks, perhaps people may begin to believe them. 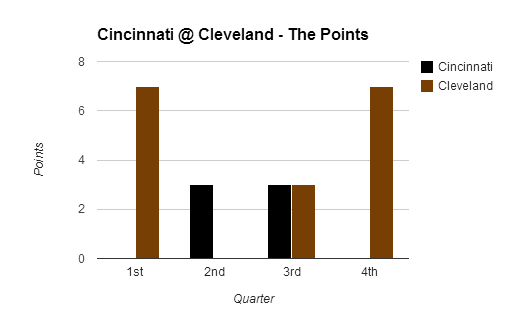 The Browns received the ball to start the game and had an underwhelming opening drive with a quick three-and-out. The Bengals got the ball and were stopped on their opening drive as well, but were able to pin the Browns deep in their own territory.

Cleveland started their second drive of the game on their own 5 yard line. The Browns would go on a 12-play, 95-yard drive that culminated in another beautiful TD throw from Brian Hoyer to Jordan Cameron. Hoyer was absolutely great on the drive, a perfect 6-6, 74 yards, and the TD. The drive had some really nice plays, specifically a 39-yard screen to Travis Benjamin. I've said for a few weeks that I'd like to see the Browns get the ball in Benjamin's hands in space and let him work. They did just that on the screen pass that he was able to get a big chunk of yards that aided the Browns on their big scoring drive. Another piece that was huge to the first drive, was the fact that the Browns converted on two 3rd downs. For the first 3 weeks of the season the Browns have been terrible on 3rd downs. The silver lining was that they improved each week. They again improved this week, converting 9 of 18 (50%).

The Bengals responded with a nice long drive of their own that got them all the way down to the Cleveland 8 yard line. Faced with a 3rd and 3 at the Cleveland 8, Andy Dalton was able to find A.J. Green, but with Joe Haden on the coverage was tackled short of the marker. The Browns defense did a good job of limiting the damage and Cincinnati had to settle for a Mike Nugent 23-yard field goal to make it 7-3 Cleveland.

On the ensuing drive the Browns were faced with the possibility of going three-and-out. On 3rd and 5 however, Brian Hoyer hit Josh Gordon for a 33 yard strike that gave them the first down to continue the drive. The catch was a beauty as Adam Jones was right there and Gordon had to go up and get it over Pacman. Not long after, the Browns were again faced with a 3rd down, this time 3rd and 14. Hoyer again found Gordon for 16 yards and another converted 3rd down. The drive would fizzle out, but would end within field goal range for Billy Cundiff. Cundiff however would miss a 37-yard field goal just left, his first miss of the year.

On the Bengals' next possesion they again worked the ball all the way down to the Cleveland 7 yard line. The Bengals faced a 4th and 1, and decided to go for it. BenJarvus Green-Ellis was absolutely stuffed by Desmond Bryant and D'Qwell Jackson for a 2-yard loss and the Bengals turned it over on downs. I can't say enough about the toughness of this Cleveland front-seven. They play with an attitude and bring it every single play.

Cleveland would ultimately get the ball back with 2:08 left in the first half, but with zero timeouts. The Browns would gain a few yards, but were faced with another 3rd down. After a Bengals timeout, Hoyer hit Jordan Cameron for 15 yards on 3rd and 4. Hoyer would hit Cameron twice more on the drive that would set up Cleveland with a 49-yard field goal attempt to end the half. Cundiff would miss again, and the Browns would take a 7-3 lead into halftime. Cundiff's miss was longer than the first, so it's understandable that he missed. It's not easy to hit near-50-yard field goals in Cleveland, but after the drive Hoyer orchestrated, it was frustrating to see the field goal go wide. Especially frustrating since he drilled the first attempt, but Cincinnati iced him, and he missed the second attempt.

Cincinnati got the ball to start the second half, but they would give the ball back to Cleveland by way of a Chris Owens strip-sack. Owens lined up on the outside receiver, but disguised and timed his blitz perfectly. Owens came untouched and blind-sided Andy Dalton, who never felt the pressure, and the ball came loose. Owens would eventually recover it himself.

The Browns unfortunately couldn't capitalize. Bobby Rainey had a nice 8-yard screen erased by an Alex Mack penalty. The Browns were then tasked with 1st-and-25 and ultimately would be forced to punt. Spencer Lanning would pin the Bengals inside their own 20.

After a Cincinnati three-and-out on the ensuing drive, Cleveland got the ball with great field position. Cleveland put together a 10 play drive, but only gained 17 yards. That was enough to set up Bill Cundiff for his 3rd field goal attempt of the day, his longest of the day as well. Cundiff would drill the 51-yard attempt. Cleveland would go up 10-3.

Cincinnati got the ball back and on the first play of their drive, Dalton connected with Tyler Eifert for 29 yards. On the next play Barkevious Mingo timed Dalton's pass perfectly and batted it at the line of scrimmage, however Buster Skrine was whistled for an unnecssary roughness penalty that gave Cincinnati a first down at their own 43. Cincinnati would nickel-and-dime it up the field and settle for a field goal to put them behind 10-6.

After a Browns three-and-out, Cincinnati was faced with a 3rd and 13 early in the 4th quarter. Andy Dalton hit Jermaine Gresham over the middle for 24 yards and you got the feeling Cincinnati was working themselves into position to make something happen. On the next play however, the snap slipped out of the hands of Dalton and squirted backwards. Mingo would tackle Giovani Bernard on the recovery for a loss of 14. This was a huge turning point in the game as Cincinnati would ultimately have to punt.

Cincinnati would pin Cleveland once again inside their own 10. Cleveland came out on their own 9 with 11:31 to play. I will eat crow because I said Brandon Weeden should start this week. Hoyer looked great throughout the game, and if he hadn't made me a believer at this point in the game, he sure as hell put the writing on the wall after this drive. Hoyer was a perfect 5-5 for 56 yards and another TD. The key for this drive though was the ability of the Browns to actually run the football. Willis McGahee had 6 carries for 33 yards on this drive. The ability to run the ball set up Cleveland with a 1st and 10 at the Cincinnati 10 yard line. McGahee would get the handoff and power through the Cincinnati defense almost getting in, but falling just short of the goaline. This was a perfect setup for the Brian Hoyer play-action pass to the fullback Chris Ogbonnaya wide open in the flats, as he caught the pass and walked into the endzone. Cleveland would take a 17-6 lead with just under 5 minutes to play. In full, the final scoring drive was 12 plays, 91 yards, and most importantly took 6 and a half minutes off the clock.

The Browns would finish off the Bengals with great defense and ultimately kept Cincinnati out of the endzone all game. On the ensuing drive for the Bengals, Andy Dalton was intercepted by Buster Skrine. Cleveland couldn't muster much on the following drive, but they did force Cincinnati to use all 3 timeouts. Cleveland would punt, then play stout defense to secure the victory. 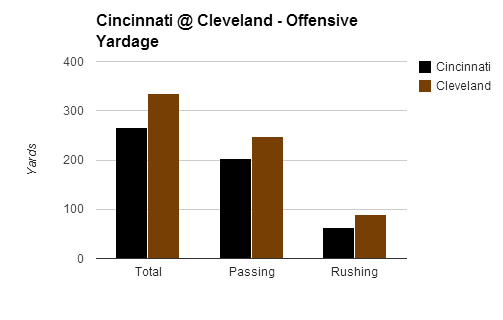 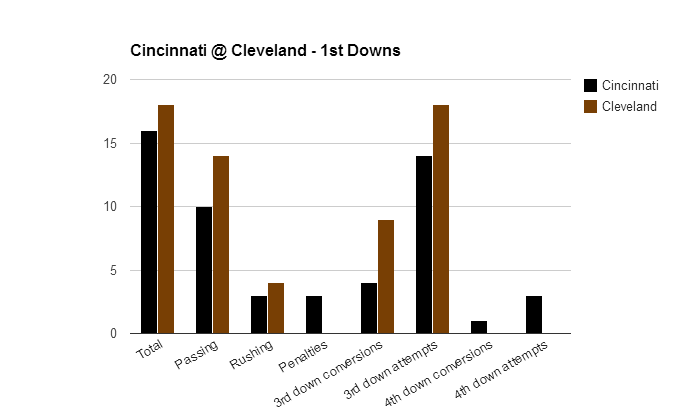 Cleveland now sits in a 3-way tie for 1st place in the AFC North. I would never have guess that after starting 0-2, trading Trent Richardson, and then naming Brian Hoyer the starter, that Cleveland would rip off 2 wins in a row and sit where they sit. It's been a fun past 2 weeks, so I hope we can keep it up.

Cleveland has a short week with Buffalo coming to town for the Thursday night game this week. The national audience will tune in to see the fightin' Brian Hoyers, so the lights will be bright. Buffalo brings a two-headed running back threat in C.J. Spiller and Fred Jackson, who just tore up Baltimore to the tune of 200+ rushing yards. Buffalo also intercepted Joe Flacco 5 times yesterday, so ball security will be big.

If the defense can continue it's hot streak, and Brian Hoyer keeps riding this wave, I think Cleveland will be just fine. Crazy how things work out sometimes, but the momentum is now definitely on Cleveland's side. Wednesday there is Playoff baseball in Cleveland (Go Tribe!). And Thursday there's a national broadcast for the Browns. It's going to be a fun week in Cleveland.