I'll take a look back at Sunday's game against the Miami Dolphins and try to make sense of things like; Trent's lack of carries and why Oniel Cousins was playing at all.

The Cleveland Browns came into the 2013 season with big expectations to improve under first-year head coach Rob Chudzinski. The Browns added a bright and shiny new coaching staff in addition to Chud, adding Offensive Coordinator Norv Turner and Defensive Coordinator Ray Horton. Despite the new additions to the coaching staff, at first-glance the old Browns showed up Sunday.

There was some good, some bad, and some comical (more on that later). I’ll attempt to breakdown the game from Sunday in my own way. I’ll be reviewing the week’s games this season and posting my thoughts every week. Some of you may agree, some may disagree, but in the end we’ll all find a common ground somewhere. 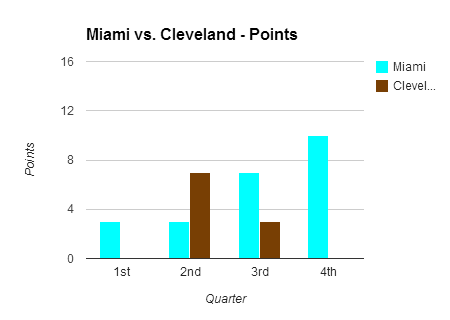 Despite Brandon Weeden’s 3 INTs in the first quarter, the Browns were resilient in the first half. And much to the pleasant surprise of the collective fanbase, walked into the locker room with a 1-point lead at halftime. Things got a little sketchier in the second half, but I really liked the way the Browns responded to adversity in the first half.

Ultimately the Browns had some opportunities go by the wayside, and the ‘Phins were able to score their first touchdown in the third quarter. Brian Hartline was on the receiving end of a 34 yard pass from Ryan Tannehill that put Miami on top 13-10. Cleveland’s secondary has been the brunt of a lot of offseason questions, and today they made Brian Hartline look ridiculously good. Miami gave Hartline a bunch of money this offseason, and the secondary did everything in their power today to make him look like he’s worth every penny.

Going into the 4the quarter it was still a tight game, Miami lead 13-10. Cleveland had some chances late, but things got ugly in the 4th quarter when the offensive line looked flat-out atrocious. The game came to a comical end when Brandon Weeden casually threw it away on 4th down. 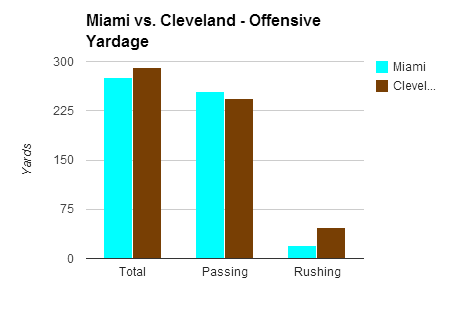 Taking a look at the offensive numbers, the game looks fairly even. Neither team was effective on the ground. There are two different stories for the ground games in this one. For Miami, Cleveland’s rush defense looked spectacular. On the post-game DBN Radio show, Kevin Nogle of the Phinsider commented on this, saying how great the Browns looked against the run. Miami was dominated defensively against the run, they finished with 20 yards on 23 carries. That is a cool 0.9 yards per rush.

I mentioned this on the radio show last night, but the play calling for Cleveland perplexed me. The first drive of the game showed great balance and rhythm (until the INT). Towards the end of the game however; it was all passing, and Trent Richardson barely touched the ball. Chris mentioned this in his snap-counts piece, but we heard all offseason about a healthy Trent Richardson being the team’s ‘workhorse’. As I mentioned, the Browns looked good on the first drive of the game, specifically Richardson tallying 26 yards on 4 carries (6.5 YPC). Richardson would finish with just 13 carries for 47 yards (3.6 YPC).

Obviously no one expects Cleveland to throw the ball 53 times (!!) every game, so I expect the Browns to come out next week and have much better balance to the offense. Expect Richardson to get the ball early, and often next week. 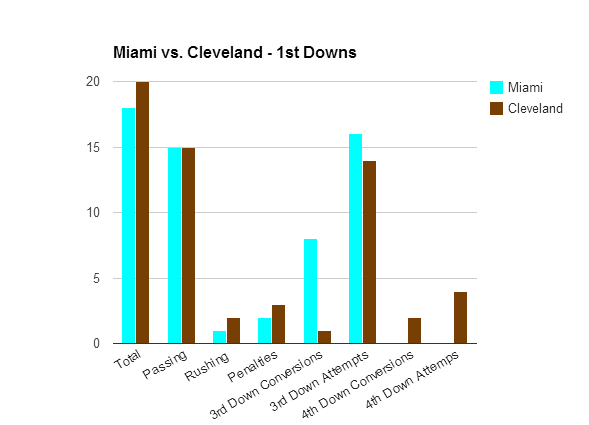 The key here is that both teams struggled to get first downs on the ground. Cleveland was 1-14 on 3rd down on Sunday. That’s just not good enough to keep the offense in motion. The lone 3rd down conversion came on a 3rd and 4 late in the 2nd quarter. Brandon Weeden hit Davone Bess for 8 yards that kept the drive going. The Browns would then go on to score their only TD of the game. The drive totaled 11 plays, their second longest of the game (longest was the last drive, 17 plays).

Speaking of Davone Bess, he had a pretty solid debut for Cleveland, hauling in 5 receptions for 47 yards on 10 targets. When Cleveland made the move for Bess, I really thought he’d be a nice addition to this young receiving core. Don’t be surprised to see him get some more targets in the coming weeks as he proved to be the guy Cleveland hoped he’d be. Bess in one of the best in the league on 3rd downs, so it’ll be important for the Browns to continue to look his way on big 3rd downs.

In addition to Cleveland’s ineptitude on 3rd down, they went for it 4 times on 4th down, converting on 2 attempts. 3 of the 4 attempts on 4th down were on their last drive of the game. They converted twice on the last drive, and on the final attempt was the aforementioned Weeden throw-away.

I came into the season opener overly optimistic, as I always do. I saw some things that I liked, but I saw some things that made me cringe as well. I am still hopefully optimistic that the Cleveland Browns are ready to turn the corner and start winning these sloppy/gross type of games. This is an incredibly young team with some good pieces in place, and a coaching staff that can steer them in the right direction. As the year grinds on we’ll see improvement and ultimately more wins. Sunday we saw the Browns notch an L in the loss column, but they’re only 0-1 now (share of the division lead!), so plenty of time for positives. Besides, if history told us anything leading into Sunday, we shouldn't have expected a win. Since the Browns returned to Cleveland in 1999, the Browns are now 1-14 in home openers. Sunday just wasn't in the cards for the Browns to start righting the ship. Guess we’ll have to wait until this Sunday to take down the Ravens!