Congratulations to Mike Krupka, who won the DBN Fantasy Football Championship for the 2013 season when he defeated Zach Miller. Krupka was the first seed throughout the year, earning an impressive 12-2 record during the regular season to grab the first seed. Miller was the third seed with a 10-4 record. 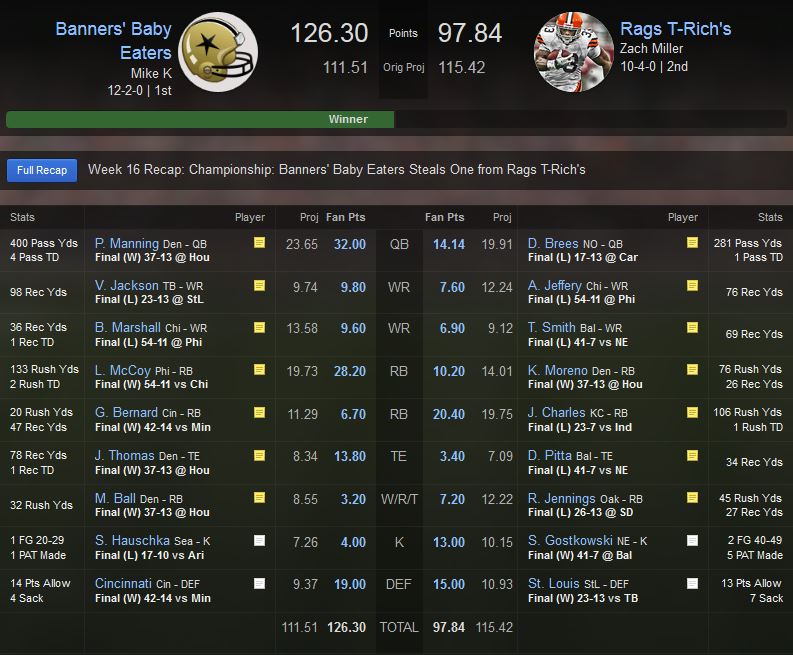 Back when the draft happened, Krupka had one of the teams I was most fond of, and I thought pretty highly of Miller's team as well. If I have one regret that could have changed my season, it would be me taking RB Ronnie Hillman instead of RB Knowshon Moreno. Peyton Manning was the key for Krupka's team -- I was able to get Manning in a later round in 2012, but not in 2013.

Here is how the rest of the standings were (the top four teams made the playoffs):

After pulling off a first-week stunner, mooncamping went on to lose his final 13 games. DaveDawg09, last year's champion, was upset in the semi-finals, thanks to Miller having the benefit of Jamaal Charles' 51.5-point game. Dawg Nuts, last year's runner-up, tanked. I ended the regular season with two straight wins, both of which came against playoff teams (Krupka and rufio).