The Browns ended up being the final NFL team to hire a head coach after firing Rob Chudzinski, but the search for his replacement is finally over. The man for the job? A defensive-minded coach in Mike Pettine.

With Denver Broncos offensive coordinator Adam Gase turning the Browns down on Tuesday, the front office acted fast, further solidifying the belief that Gase previously was their No. 1 candidate. Cleveland met with Pettine for the second time Tuesday night at the Senior Bowl in Mobile, Alabama. You knew something was up when earlier on Tuesday, assistant general manager Ray Farmer was the only guy there, and then later in the day, you read this:

Pettine and the Browns reportedly met for over four hours, but Cleveland did not make an offer afterward. Wednesday night, it was reported that Pettine would be flying to Cleveland on Thursday for a third interview. Thursday morning, Will Burge of Bleacher Report said that it was not set to be a third interview, but rather a meeting for contract negotiations to make him the team's next head coach and discuss possible coordinators:

Sources confirm #Browns have chosen Pettine as next HC. Say meeting today is not interview but contract neg. If deal is reached he is coach

At around 3:40 PM EST, Mary Kay Cabot of the Plain Dealer had the confirmation, and the team followed up with a confirmation shortly thereafter:

#Browns have reached a deal with Pettine, source tells http://t.co/o11vJT6fp2

Pettine finished up his first year as the Bills' defensive coordinator, coaching a unit that was ranked 10th in the NFL. Pettine isn't just a one-hit wonder, though -- he has a good track record of getting defensive units to play at a high level. He was the Jets' defensive coordinator from 2009-2012. Before that, he spent seven years as a defensive assistant with the Baltimore Ravens, including close work with defensive linemen and outside linebackers. 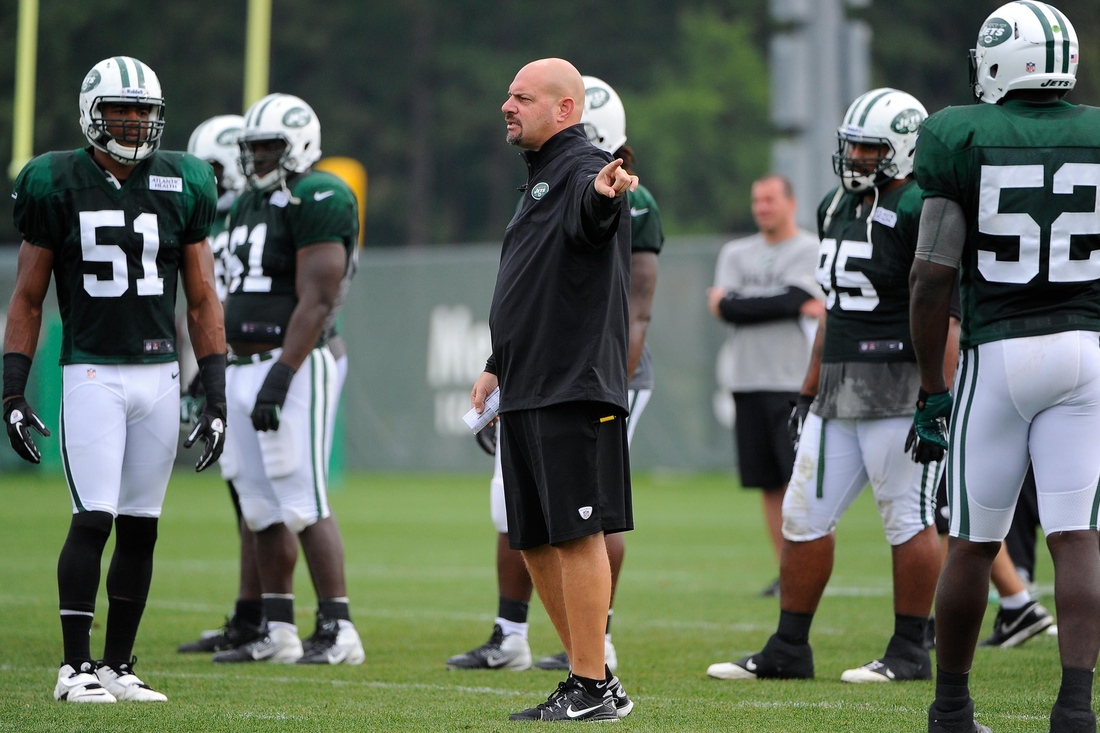 From 2009-2012, Mike Pettine led the Jets to the 1st, 3rd, 5th, and 8th ranked defenses in the NFL. If that's not consistency, I don't know what is. On top of that, he turned the Bills around in one year, as they had the league's 10th-ranked defense in 2013. Photo Credit: Rich Barnes-USA TODAY Sports

Considering how disappointing Paul Kruger, Jabaal Sheard, and Barkevious turned out by the end of the 2013 season, Pettine's experience can be used to take those players to the next level. Pettine calls a 3-4 hybrid defense, so the departure of Ray Horton after one season doesn't seem as significant. Buffalo Rumblings, our Bills affiliate, highlighted why their defense would sorely miss having Pettine.

One thing Pettine is constantly searching for: BITCH-KITTIES, his term for havoc-wreaking pass rushers. He'd thrive in AFC North. #Browns

Now, the big question is, "who will Pettine bring along as his assistant coaches, specifically the offensive coordinator?" Because the Browns were the final team to hire a head coach, they get the last pick of assistant coaches. If Pettine chooses wisely, though, he actually has an opportunity to promote some up-and-coming, bright young minds who are starving for a bigger role with some innovation.

Here are some quick-hitter reactions from other members of the DBN staff:

Zach Miller: "I like the hire. He knows defense, and that's currently one of our strengths. Why not strengthen your strengths while addressing your offense in the draft as well? Pettine seems like a hard-nosed, fiery guy, something this town needs. He needs a big-time offensive coordinator to succeed, but I am still for it."

Matt Wood: "When I first heard of Pettine possibly being interviewed, I was excited but didn't give him much of a chance to get the gig. He doesn't fit the prototypical mold of what Banner and Haslam had previously mentioned on what they were looking for -- specifically, he was a defensive coach.

With that being said, I love the hire, but I will be paying close attention to the offensive coordinator. It looks as if we are going to go all-in on offense this offseason, and that will require a strong offensive developmental coach. Without that, I worry about the development of a possible first-round pick, and if you believe reports, that could end up being Johnny Manziel.

When it is all said and done, I'm excited for Pettine, but this franchise will not get better until they draft a good quarterback and have a functioning front office that can identify and draft talent. Hopefully "Plan J" is a winner for the Browns."

Jon Stinchcomb: "I'm starting to get sold on Pettine, based on what I'm hearing. I don't know anything about his past year with the Bills, but his time with the Jets spoke for itself on that side of the ball, albeit with Rex at the helm.

I preferred Quinn, mostly because of the 'what have you done for me lately' mentality, but I also determined at the start of this search that any hire couldn't be fairly judged until we see him coach regular season games. Now that Pettine is aboard, the next big question is who will lead the offense?"

Mike Krupka: "I'm not really sure what to think. I think the front office will try to sell us that this hire was the result of their in-depth search process and that he is the right guy for the job. That being said, we've heard that before and this time we've watched several guys already say, 'thanks, but no thanks' to 1 of 32 head coaching jobs in the world. So, color me skeptical until the coach and team proves otherwise.

I will admittedly say that I don't know much about Pettine, but my Buffalo buddy laughed at me over the weekend when I mentioned he was being asked for a second interview. So there's that. What I do know is that he's a defensive-minded guy, so that fits our division and our strengths as a team right now. But regardless of who it is, he is in for an uphill battle. We need to score points, so I am curious who's left that he will bring in as an offensive coordinator. Buckle up. It could be a fun ride, or it could all derail once again."

Josh Finney: "I'm not getting overly invested on any candidate until I see the product on the field. We've had too many coaches, and there has been too much coach-speak in the last few hires. I don't want to hear about the plan anymore, I want to see a guy step in and use the talent that Tom Heckert had assembled on this team to win some games, and do it now.

THAT rant aside, Pettine, Koetter, and Quinn were all solid choices. I liked Quinn and Pettine because they both can utilize the talent in place currently on the defense without a major rebuild. Pettine is a proven quantity on defense, and a good portion of the best coaches in the league have a strong background on that side of the ball (Bill Belichick, Pete Carroll). I agree with others who say that the offensive coordinator, quarterbacks coach, and other assistant coaches are going to be critical for him to get off the ground, because we're going to have to grow some youth up in a hurry in 2014.

My honest grade right now is an incomplete, but I'm good with the move. Anyone who starts with the 'He wasn't even a top choice' crap can stuff it; he's got a good NFL pedigree, he's no-nonsense (go watch his videos/Hard Knocks if you think the guy screws around) and he WANTED the gig. He is instantly a bright mind at offensive coordinator away from knocking the bolts out of the rest of the AFC North.

Also, I can't wait to buy one of @TheKardiacKid's 'It's Cleveland, but hey, still cool!' t-shirts. (For those not on Twitter, that was the quote from Pettine's daughter after she found out about his second interview; her account has since been removed.)"

rufio: "Pettine has coordinated a good defense and gotten a previously underachieving unit to succeed. He knows defense. He sounds like a no-nonsense guy, and he sounds like the players will like and respect him.

With that said, I am not completely sold on his ability to be a successful head coach in the NFL. He has demonstrated success in developing a defensive scheme (and stealing some of one from Rex Ryan), but I think there are more important things that factor in to success for head coaches. I would have rather seen a guy who has proven that he can adapt and who has stayed true to broad, proven principles. Can Pettine do it? Maybe, but I have no clue from my couch.

For instance, Chip Kelly has always believed in spreading the field, making defenses guard everyone, getting speed in space, and giving his quarterback simple but effective reads of post-snap actions by the defense. Those principles win, and all of Kelly's teams can accomplish those things. But he's been able to do it with any number of running QBs and Nick Foles, any number of small, lighting quick running backs and LaGarrette Blount, with a heavy reliance on the zone read game and without it. Gus Malzahn has won with Wing-T principles morphed into...whatever Auburn's offense looks like now. In coaching you either adapt or you die.

Pettine could turn out to be a home run, but my guess is that he is more like a solid base hit. Nothing especially flashy, but a solid, respectable coach who is knowledgeable and hopefully respected. Scheme-wise I expect us to be a multiple front, pressure-based defense. We'll blitz but not all the time, and I expect us to mix 2-gap and 1-gap principles together in the same front. We might/will probably run some "Eagle" or "46" fronts, and the rest of the time I think you'll see a "hybrid" between 4-3 and 3-4. No need to worry about players not fitting the scheme, I think if they are good we'll find a way to play them.

Like others, I am very interested to see our offensive hires and to see what happens with our personnel now that we have a head coach. Hopefully we can turn our attention toward retaining our All-Pro players and getting a young, talented quarterback on this team."

What do you think of the Pettine hire, Browns fans? Let us know in the comments section below!