Interesting Note of Fan Perception on Chud vs. Pettine

Share All sharing options for: Interesting Note of Fan Perception on Chud vs. Pettine

Last week, one of our members wrote a FanPost, which conducted a poll to gauge fan perception on who fans thought had a better resume to be a head coach: Rob Chudzinski or Mike Pettine. The purpose of the poll was not to factor in how much the front office has botched this situation, but rather to determine which candidate is more qualified in the eyes of the fans to be a head coach. The results were split right down the middle: 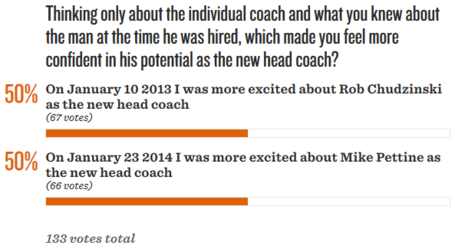 You have to think that Chudzinski's assistant coaches influenced the vote, but given the negative impact I anticipated fans would have toward the front office, it is a moderate surprise to see Pettine with already as much support as he has from the fans. The combination of getting a head coach, retaining Ray Farmer as assistant general manager, and seeing our players in action at the Pro Bowl has calmed the fire a little bit. Also, it doesn't hurt the Browns that the city's basketball team, the Cavaliers, are really struggling right now and absorbing all of the negative attention in sports media.