Super Bowl 2014: Broncos Will Win Because It's Peyton Manning's Time

Share All sharing options for: Super Bowl 2014: Broncos Will Win Because It's Peyton Manning's Time

The Denver Broncos should have been in this position last year, but a miraculous heave from Joe Flacco to Jacoby Jones changed that. This year, the Broncos put all of that behind them and cruised through the AFC playoffs, first with a bye, then with a convincing win over the Chargers, and culminating in Peyton Manning vs. Tom Brady not turning out to be a classic for once, as Denver purely outplayed New England. Now, the Broncos are set to do battle with the Seattle Seahawks in Super Bowl XLVIII, and there's one big reason why Denver will emerge victorious.

Why the Broncos Will Win Super Bowl XLVIII

Why Else? -- Because of Peyton Manning: In my opinion, Peyton Manning will go down as the greatest quarterback of all time. I don't care how many Super Bowls he has -- he has shattered records time after time and commands an offense unlike any other.

When the Colts released Manning a couple of years ago, it was an unprecedented situation in free agency: as long as Manning's health was fine, whoever signed him would vault themselves to Super Bowl contention immediately. Hell, even if Jacksonville or Cleveland had been able to sign him, you'd have to think that Manning would've had either team in the hunt to be playing at MetLife Stadium this Sunday.

"The Super Bowl, it's a big deal. I know how hard it is to get here. I know how much time and sacrifice our team has made in order to have this opportunity to play in this game."  -Peyton Manning

Despite all of those accolades, though, I understand that there is a large percentage of fans who point to Manning's playoff record and the fact that he only has one ring as a sign of failure -- or, rather, that "he is not in the same class as Tom Brady." Even a recent poll among players had Brady as the leading vote-getter for the question, "which quarterback would you want to rally your team with under two minutes to go in a playoff game." That irks me. 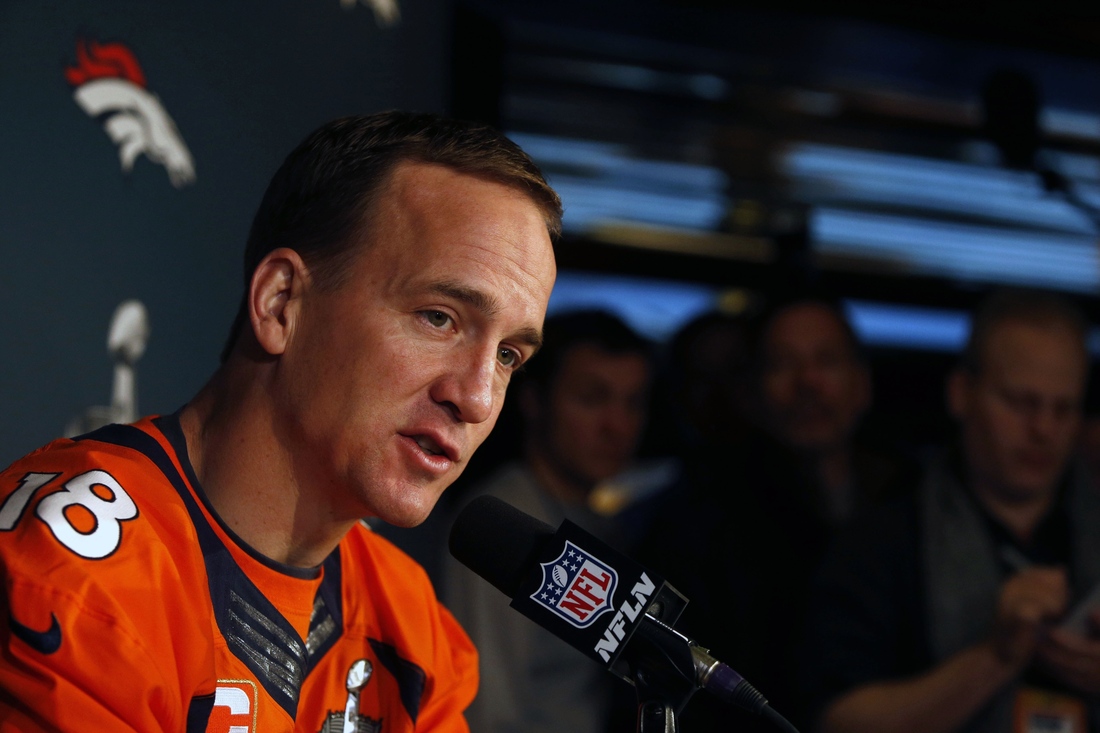 Despite all of his accomplishments in the NFL, many feel that Peyton Manning needs a second ring to be considered the greatest quarterback to ever play the game. With a win on Sunday, he'll get that second ring and improve to 2-1 in the Super Bowl. Photo Credit: Noah K. Murray-USA TODAY Sports

I am a die-hard Cleveland Browns fan, but since I've started watching football, I've always felt like "Peyton Manning" was my next home team. I put his name in quotes because my allegiance is to Manning, not the team he is playing for. When Manning was released from the Colts, I didn't care whether Indianapolis won or lost (well, I wanted them to lose because of the Trent Richardson draft pick, but that's a different story).

With one win, though, Manning can erase any criticisms he's faced and be rightfully placed on the pedestal where he belongs: the greatest of all time. No more talk about Brady being better, or "even Eli has won more Super Bowls." This isn't a destiny thing either: Manning is in his 15th season and yet is playing the best football of his career. He threw for 5,477 yards, 55 touchdowns, and 10 interceptions. He has what has morphed into one of the best group of receivers in the NFL, as well as a dynamic running back. The defense is better than what he ever had in Indianapolis, even with losing players like Von Miller and Elvis Dumervil.

The Seahawks are certainly no pushover, but the thing that puts them over the top as a team is their home field advantage. When you look at their schedule, though, somehow Seattle played some of the worst offensive teams in the NFL this year. When Manning is firing on all cylinders early, the Seahawks won't know what hit them until it's too late. Denver is built to be a team that can maintain a lead or come from behind, but the same can't be said for the Seahawks in terms of coming from behind. Why? Because Denver's front seven isn't too shabby, as a member from our Broncos affiliate points out:

This is where I think Seattle is going to be in for a surprise. When I look at our front seven vs Seattle's O-line and backs, I start to drool a little bit. Our strengths look very good matched up with Seattle's inconsistent line. 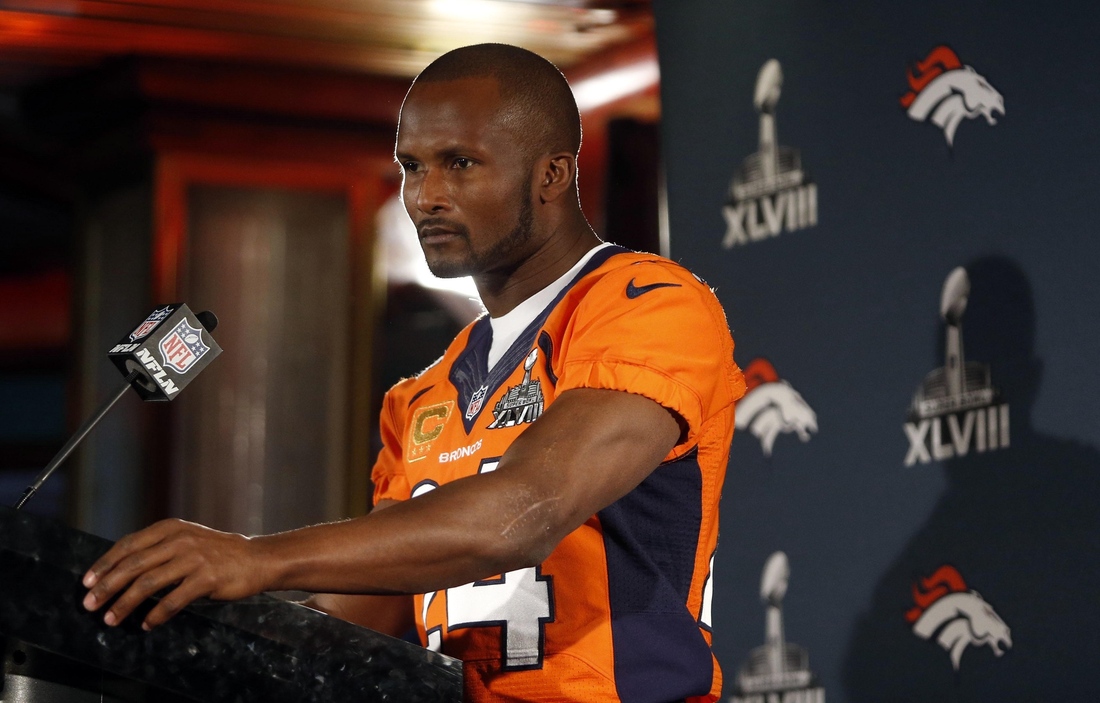 Besides Denver's front seven, CB Champ Bailey, now in his 15th season, is ready to finally play on this stage for the first time in his career. His task? To cover a Seahawks receiving corp that isn't all that impressive. Photo Credit: Credit: Noah K. Murray-USA TODAY Sports

Manning also consulted with his brother about both the Seahawks and playing in MetLife Stadium:

(On how much he has talked to Eli Manning about playing in MetLife Stadium, and on playing the Seahawks): "He told me he couldn't help me much with Seattle. It wasn't one of the Giants' better days. So he said to not ask him for a whole lot of help there. Eli and I have talked about playing in this stadium. I feel it was helpful to play in this stadium this season. It was the first time I had the chance to play in that stadium. So, it's nice when you've played in it before, at least you kind of know the surroundings a little bit. Eli has been always helpful to me for many reasons. I've talked to him a number of times these past couple of weeks, and he is excited for me. I've always appreciated his help and support."

Also, unlike the 49ers, the Broncos have a receiver who can go up against Seahawks cornerback Richard Sherman: Demaryius Thomas. If Thomas can't get it done, Denver can go to their second (Eric Decker), third (Wes Welker), or fourth (Julius Thomas) options. Heck, Manning could even throw a "duck" up to Jacob Tamme and make it work. As good as the Seahawks' defense is, there are just too many weapons for them to combat in this game, thanks to Manning's ability to elevate the players around him, and Seattle won't have the intimidation factor of the 12th man on their side. We'll be chalking up Manning's second Super Bowl win and an MVP award by the time the game is all said and done.

On Saturday, I will have a counter-piece talking about why the Seahawks will win, before having my final prediction and preview on Sunday.