Yesterday I forced you to be happy, today you can be as miserable as you want!

This piece is the complete opposite of yesterday's Weekly Affirmation. Today we all take a minute to say the craziest, most depressing, most miserable things we can think of.  Yesterday I talked about how awesome it was to have five all-pros, and much like the positive side of things, it isn't difficult to find a negative to talk about today. 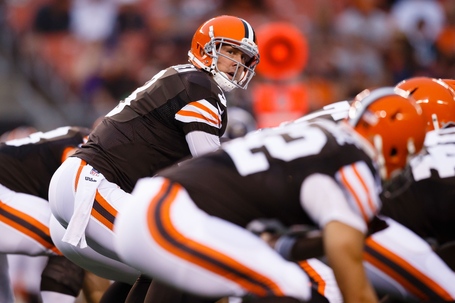 Our Quarterbacks blow.  Hard.  In the NFL you can't win without a QB.  Some people will point to Trent Dilfer and claim it can be done, but the rules have changed dramatically since then and even those Ravens needed the best defense in NFL history to cover for their offensive ineptitude.  Sadly, that version of Dilfer would probably be an improvement on this team.  Brandon Weeden had a ho-hum rookie year, and many thought he was primed to take a step forward in an offense tailored more to his strengths this season.  Boy could that not have been more wrong.  Weeden not only failed to improve, he actually looked worse this season.  He held on to the ball like a baby holds on to its pacifier.  He failed to hit open receivers.  He threw interceptions at the worst possible time.  It was ugly.  Even the most ardent Weeden supporters had given up before the midpoint of the season.  Brandon Weeden has all the natural talent in the world, but he didn't adjust to the NFL fast enough and given his advanced age I doubt he'll get another chance as a starter in the league.  He'll probably bounce around as a backup for a few seasons, but what a disappointment he has been for the Browns.

Jason Campbell is Jason Campbell.  He had a couple amazing games, but it didn't take him long to remind everybody why he's regarded as nothing more than a backup.  He made decisions like Weeden without any of the arm strength to overcome some of the bad ones.  Campbell played like a game manager in the sense that he didn't make any big plays, but he screwed up the part where you make accurate throws and don't turn the ball over.

That brings me to the golden child, Brian Hoyer.  Some people like Hoyer, and I'm sure he's a great guy, but he's not an NFL quarterback.  He got cut by three teams in less than a year.  He's now made four starts in five years.  Remember when I led off the Jason Campbell part by mentioning he had a couple great games?  Hoyer's two games were worse than Campbell's first two, and yet we have people insisting that Hoyer will play better than he's shown even though we saw what happened to Campbell.  And remember, Campbell has more natural talent and game experience than Hoyer.  It's not even like Hoyer's two starts were particularly great either.  If Hoyer had played a whole season his completion percentage would have been 26th in the league, tied with Mike Glennon.  His YPA would be 35th, behind guys like Chad Henne and (get this) Brandon Weeden.  You want any of those guys starting for the Browns next season? Didn't think so.

But wait! We've got the fourth overall pick!  There are two problems with that.  There's only one blue chip QB in this draft in Teddy Bridgewater, and we won't get a crack at him.  That means you have to trust Mike Lombardi to pick the best of the rest at number four.  Failure is all but guaranteed.  That assumes we don't do something ridiculous like draft a guard or linebacker fourth overall.  I'd like to say that's impossible, but we're talking about a guy who took a fullback in the first round, so who knows.  It's a quarterback driven league, and all of ours suck.

I'm going to grab a drink now, let me know in the comments what depresses you about the Cleveland Browns.