In this installment of the series, I look at Tennessee Titans quarterback Jake Locker.

Share All sharing options for: Browns Pass Rush: Clash with the Titans Part 1

What kind of pressure can the Browns get on Titans QB Jake Locker? That's a question for another time. Before we can do that, I'd like to devote this article to looking into what Jake Locker's 2014 game tape has led me to conclude about how he fares against pressure.

Okay, first of all, technically all quarterbacks struggle versus pressure to some degree. However, each week so far this season the Browns have faced quarterbacks that maintain their composure and sound throwing mechanics in the face of a strong pass rush. Jake Locker differs greatly from the likes of Ben Roethlisberger, Drew Brees, and Joe Flacco in this area. To me, it appears to be chiefly due to poor pocket awareness and pocket movement but it's also due in part to poor decision making and poise under pressure.

Upon watching the tape of the above plays (among others) -- the first of which was almost intercepted and the second fell at the feet of his receiver -- if I were his coach I would stress the point that nothing good happens when you can't step into your throw. If this sounds like it's stating the obvious, that's just because it is. However, he's been dangerously lobbing the ball off his back foot in these situations when he should either be grounding the ball in the direction of an eligible receiver, sailing it far out of bounds (as he does on the third play above), or conceding the sack. So, apparently, the point has not been well taken.

Furthermore, he should be looking to avoid getting himself into these situations in the first place:

The play below further substantiates the claim that this is not just an issue of pocket awareness but also of poor decision making under pressure:

This was on 4th-and-Goal with TE Delanie Walker open in the near corner of the endzone. Locker has room to stride into his throw. Instead, he pulls back and throws off his back foot. The pass sails on him and Walker catches it but is unable to come down with it in bounds. Turnover on downs. Now, I understand that this is a fade to the back pylon, but Walker beat his man well enough for Locker to put the ball much, much lower than he did: 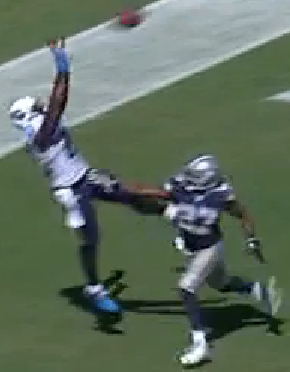 As you can see below, Locker saw how open Walker was before he released the pass but chose not to stride into his throw, despite having the time and space to do so. Instead, he doesn't trust his left tackle's block and opts for the "safe" lob off his back foot rather than stepping into a sharper pass to the huge open window he has to Delanie Walker: 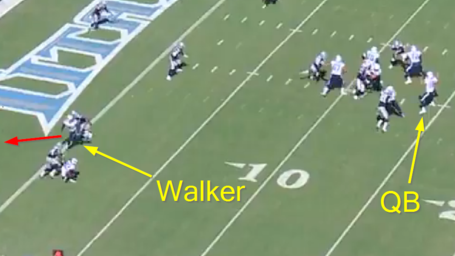