A Proper Introduction for Ray Farmer, General Manager of the Cleveland Browns

A closer look at the new general manager of the Cleveland Browns, Ray Farmer.

Share All sharing options for: A Proper Introduction for Ray Farmer, General Manager of the Cleveland Browns

Amidst the shock of Jimmy Haslam firing Joe Banner and Michael Lombardi, we have yet to give Ray Farmer a proper introduction as the new general manager of the Cleveland Browns here at Dawgs By Nature. I consulted as many sources as I could regarding his transition from an NFL player to a front office role. My findings are outlined below.

Playing Career in the NFL

A look into what it would cost to use the franchise tag on either C Alex Mack or SS T.J. Ward.

Many in the national media perceived the changes to mean things were only getting worse and that Cleveland was becoming a circus act under new owner Jimmy Haslam. Not so.

Born in White Plains, New York, Farmer (6-3, 224 lbs) played safety for Duke University from 1992-1996. The Philadelphia Eagles selected him in the fourth round of the 1996 NFL Draft and converted him to a linebacker. During his rookie season, he started 11 games for the Eagles (32 tackles, 1 sack, 1 INT, 1 forced fumble), followed by 5 starts in 1997 (18 tackles, 1 sack). He had been forced into mostly a special teams role by the end of the year.

In 1998, Farmer only played in two games before being waived by the Eagles. His release reportedly caused a bit of a strain on the locker room, but then-head-coach Ray Rhodes said that it was simply a numbers game (they needed to sign someone else due to injuries). Farmer was scheduled to try out with several teams, but wasn't signed by any of them.

Farmer tried to make a return to the NFL during the 1999 offseason. He signed with the Carolina Panthers, but was waived near the beginning of April after failing a physical. That was the last trace of his playing career, as he retired due to knee problems. What is a little funny is that Farmer's playing career -- from 1996 to right before the 1999 draft -- fell within the same time period that the Browns were without a football team.

Transition to a Front Office Role

After being waived by the Panthers in 1999, Farmer became a co-host of "The Playaz Club," a sports talk show on WFNZ in Charlotte, North Carolina, and also did some business in banking. In a 2008 interview with John Delong of the Winston-Salem Journal, Farmer said that after the Panthers waived him, he asked about what it took to get a role in their front office, showing that the interest in such a role was there from the get-go:

"I'm like, ‘What do I have to do to get into the front office?' " he said. "I spoke to people with the Panthers at the time and they were like, ‘Blasting people on the radio is probably not a great idea, but nonetheless, you might want to go back to your alma mater and kind of prove that you want back in.' So that's what I did."

Farmer also knows how rough the NFL can be, and explained his resentment toward the Eagles:

"The reason I got back into the NFL, I'll be honest -- I felt like I got screwed in Philadelphia," he said. "I'm not saying that maliciously against them. I think it's somewhat what the league was back then, they told guys whatever they had to tell them to kind of get what they wanted. I felt like, OK, they knew I had bad knees, but it was what it was, so screw him. Adios. We need another guy.

They kind of put me on the street and told me one thing, and I got out there and worked out for the Panthers, for New England, for Jacksonville, Seattle, Washington, Pittsburgh, Tennessee, Atlanta, Dallas -- I was all over the place. And there's all these other guys signing, and I'm sitting. And then I come to Kansas City, of all places, and my agent had a contact who said, ‘You've got a bad knee, man, that's why nobody's signing you.'"

Farmer received his first front office type of opportunity in 2001, when Duke hired him as their Academic Coordinator for Football. In 2002, the Atlanta Falcons called him to schedule an interview. He interviewed and was hired one day later as a pro scouting assistant on a one-year contract. He ended up spending four years with the Falcons from 2002-2005, working his way up the totem pole. 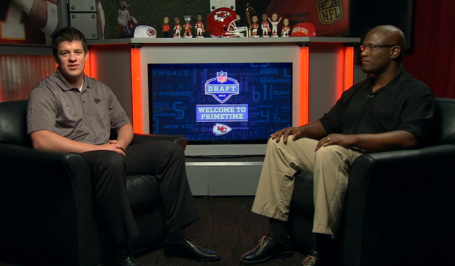 In 2006, Farmer got a call out of the blue from the Kansas City Chiefs, who wanted him to be their new Director of Pro Personnel. Farmer jumped at the opportunity and survived several regime changes, working with the Chiefs through 2012.

Farmer received the highest of praise from Scott Pioli and others, but fans best knew of Farmer because he was the guy who delivered the news to players on HBO's Hard Knocks that they were being cut. His ultimate goal was to become a general manager. Enter the Cleveland Browns.

For all of the flak that Browns fans gave Joe Banner for meddling his nose in the football side of things as the team's CEO last year, one thing he deserves a big hat tip for is bringing Farmer to the organization. Banner was part of the Eagles' organization in 1996 when the team drafted Farmer.

"I've been very impressed with him," said Banner, singing the praises of Farmer when the team brought him aboard in 2013. "I've always had him in mind as someone I'd potentially want to bring into an organization I was part of, and the situation presented itself. ... As a player, he was a good hard-working person. I've made a practice through the years of just asking people constantly around the league, 'Who do you work with that's sharp? Who are the young up-and-coming people?' And Ray's name started to get mentioned to me all the way back when he was at Atlanta. Then, I started hearing his name some more in Kansas City, just as a very bright, hard-working guy; understood the elements of putting together a team versus just picking players."

The Browns just had one problem: they had already hired Michael Lombardi as the Director of Player Personnel. Banner stated that he preferred that title versus the title of general manager because it gave people "something to aspire to." In order for Farmer to come to Cleveland, he needed to receive a promotion rather than a lateral move. That's why Banner promoted Lombardi to general manager -- the "assistant general manager" label was considered a promotion to Director of Pro Personnel. From there on out, Farmer belonged to Cleveland. 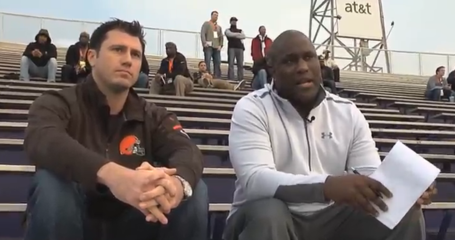 Before hiring Lombardi, the Browns had also interviewed Farmer for their general manager position. Farmer said that he felt his "lack of experience on the college side and the fact he never ran a draft hurt his candidacy." When Farmer was hired as assistant general manager, Banner said this about Farmer's role:

"Ray will be involved in both the college and pro side of the personnel department,'' he said. "He will be doing everything from participating with Mike in supervising the college and pro scouts in addition to the college and pro directors we have. He will be on the road scouting college players, and he'll be an integral part of all of these strategic decisions we have to make whether it be free agency, draft picks or whatever. He adds a voice that's just a top, top tier player evaluator in the NFL.''

Because Farmer was hidden in the assistant general manager role, it was a bit unclear "what" he did last year. We did hear a report that he was responsible for recommending the Browns sign QB Alex Tanney, based on his days with the Chiefs. Farmer reportedly had a voice at the table of decision-making, along with Rob Chudzinski, Joe Banner, and Michael Lombardi. In an interview last year with Tom Reed of the Plain Dealer, it was insinuated that Farmer favored making the trade to the Indianapolis Colts involving RB Trent Richardson.

In the October interview last year, Farmer was also asked about QB Brian Hoyer, to which he responded, "I think he’s got a lot of pieces to the puzzle and he demonstrated in those several weeks he could be a championship-level quarterback."

In that same interview, Farmer was asked about the Josh Gordon trade rumors. Farmer acknowledged that of course it makes sense to keep an open mind in case a ridiculous offer comes along, but that they recognized Gordon's talent:

"It’s like anything, if someone comes to me and says, ‘Ray, you drive a nice car, I’d like to offer you $1 million,’ it’s sold," Farmer said. "I don’t think Josh should be worried about it. He’s a talented player. The league recognizes his talent, we recognize his talent."

It's also worth noting that Farmer had nothing but positive things to say about Lombardi, who he has now replaced: "I know there are people in the league who question what he’s done. I can’t speak to any of that. Since I’ve been here he’s an A-plus."

Turning Down a GM Role, Falling Into Another

In 2013, Browns owner Jimmy Haslam said, "I’ll be surprised if Ray’s not a GM in the next few years, which will be good and bad news for us." Just a couple of weeks ago, it looked like Farmer was going to get that opportunity after one year. He was the frontrunner for the Miami Dolphins' general manager vacancy. The job was his...and he turned it down. 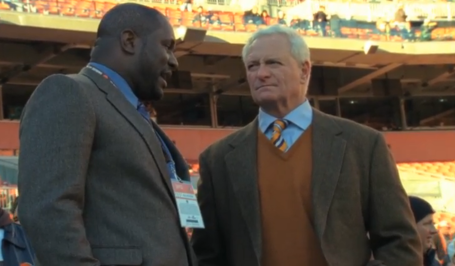 About two weeks later, he was as surprised as anyone to hear about the firings of Banner and Lombardi. He was offered the role of general manager...and he took it.

Looking at Dolphins' situation, it looks like he averted a disaster there. Would you really want to be the guy walking into the Incognito-Martin mess as your first order of business to clean up, or focus on a team with a ton of cap space, plenty of draft picks, and good, young, core talent already in place?

From the calls out of the blue from Atlanta and Kansas City, to the sudden promotion in Cleveland to general manager, Farmer has indeed had a stroke of good fortune in terms of his rise to stardom. It's also a sign of praise, because several organizations have recognized that he is a star in the making:

Farmer has had a lot of interviews with the media over the past several days, but we'll get more into those quotes over the coming weeks. Farmer is familiar with this roster, so you can't expect significant roster turnover, but we might see the back-end of the roster handled different, as it was very fluid last season by the previous front office. I hope this post gave you more of an idea as to where Farmer's roots began in the NFL.

Images via videos on ClevelandBrowns.com and KCChiefs.com.