The results of our poll on who the Cleveland Browns should use the franchise tag on in 2014, if it comes down to that.

As of Monday, February 17, teams can begin slapping the franchise tag on a player, but it is to their advantage to wait until the last minute to see if they can negotiate a long-term deal first. The deadline to use the franchise tag is before 4:00 PM on March 4, and it can only be used on one player per team.

A few days ago, we broke down the advantages and disadvantages of using the franchise tag on C Alex Mack or SS T.J. Ward, assuming that neither player wanted to agree to a long-term deal. In other words, if both players wanted to test free agency, who would we want to hold hostage for at least another year? I picked Mack, but the consensus from fans was that Ward should be locked up: 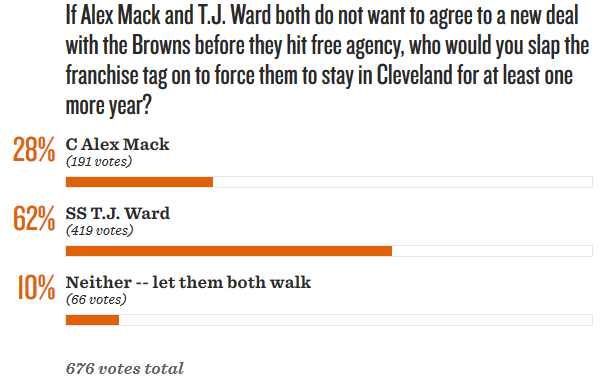 Mack received 28% of the vote, while Ward received 62% of the votes. 10% of the votes went to "neither," which doesn't make sense really, given all of the cap space the team has.