This Sunday, the NFL season will officially come to a close when the Denver Broncos take on the Seattle Seahawks in Super Bowl XLVIII. Kickoff time is scheduled for around 6:25 PM ET. Here is my official prediction for the game:

Related Links: Why the Broncos Will Win | Why the Seahawks Will Win 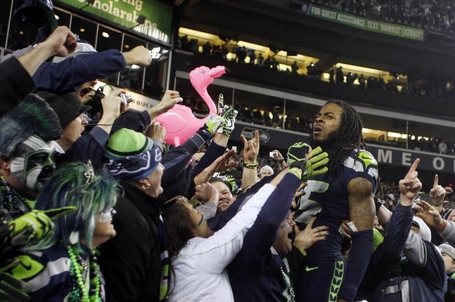 The Seahawks' defense thrived off of their home fans, but will they lose some of their edge on a neutral field? Credit: Joe Nicholson-USA TODAY Sports

Broncos Defense: For all intents and purposes, this is a patchwork defense that Denver is sending out on to the field. Two of their best defenders from last year included Elvis Dumervil and Von Miller, and they lost Dumervil due to a contract snafu and lost Miller due to an injury.

With that said, the Broncos have been able to pick up the pieces for a very respectable defense, led by a breakout season from outside linebacker Danny Trevathan. At 6-5, 335 pounds, defensive tackle Terrance Knighton makes it tough for opposing teams to get things going on the ground. Denver ranked 10th in the NFL in run defense this season. Shaun Phillips has been a key replacement for Miller in the front seven, shining with ten sacks during the regular season and two sacks in the postseason.

Statistically, the Broncos' pass defense is where the question mark is, since they ranked 27th in the NFL in that area. Something to consider is the fact that veteran cornerback Champ Bailey, who is playing in his first Super Bowl, only played in five regular season games due to injury. He's been back for the playoffs, and the combination of he and Dominique Rodgers-Cromartie is one that the Seahawks receivers will have a tough time beating.

Seahawks Defense: There's not much of a weakness on the Seahawks' defense, which ranked 1st in the NFL during the regular season -- 7th against the run and 1st against the pass. They allowed a league-low 14.4 points per game. To compare, the Broncos allowed an average of 24.9 points per game.

Seattle's secondary is deadly, led by two defensive player of the year candidates in cornerback Richard Sherman and safety Earl Thomas. Sherman brings the right combination of physicality, trash-talk, and playmaking ability on the ball to be considered one of, if not the best, cornerback in the NFL. Thomas makes a lot of plays at the roaming safety, while safety Kam Chancellor can be counted on to take away a team's tight end in the passing game. The Seahawks would be wise to analyze the approach the Colts' secondary took when they were able to frustrate Manning during the regular season.

How good is the Seahawks' pass rush? Their two leading sackers are defensive ends Cliff Avril and Michael Bennett, but both of them are on the backup units, getting plenty of rotational snaps in the right packages. It's all about the scheming that defensive coordinator Dan Quinn does, which is why he was an attractive head coaching candidate to a team like the Browns at one point. 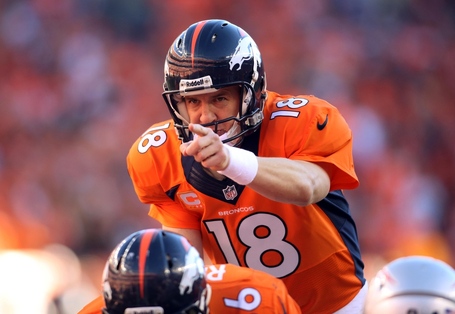 Peyton Manning had the greatest season ever from a quarterback, but will it be for nothing if he can't win another Super Bowl? Credit: Chris Humphreys-USA TODAY Sports

Broncos Offense: The matchup to watch is when Denver's offense is on the field with Seattle's defense, because it features the No. 1 offense in the NFL against the No. 1 defense in the NFL. Denver ranked 15th in the NFL on the ground, but that doesn't mean they can't run the ball -- it's just a testament to how good their passing game is.

Peyton Manning had the Broncos averaging 340.3 passing yards per game. The next closest team was the Saints, who averaged 307.4 passing yards per game. The reason Manning can throw the ball with ease is the fact that he has so many weapons. If the opposing team has four solid coverage guys, Manning will have a fifth receiver who he can reliably go to.

Specifically, the Broncos are led by receivers Demaryius Thomas, Eric Decker, Wes Welker, and tight end Julius Thomas. Each one creates a matchup problem in their own right, and when you put them all on the field at the same time with Manning's ability to diagnose a defense, it's almost impossible to stop. Can a team get Manning and the Broncos off their game? Yes, but it doesn't happen very often.

Seahawks Offense: The NFC West certainly has a good, young batch of quarterbacks, don't they? This year, it's Russell Wilson representing the Seahawks in just his second season. It's hard to describe Wilson's ability as a quarterback. He's not the type of player who is going to take off for a big gain on the ground, and he's not going to light the opposition up with his arm. The biggest key to his game is that he buys into what the Seahawks need from him -- hand the ball off to Marshawn Lynch, don't turn the ball over, and when the time is right, scramble like mad and then find an open receiver down the field.

The Seahawks ranked 17th in the NFL, but only 26th in the passing game for the reasons described above. Their strength is on the ground, where Lynch has propelled Seattle to the 4th-best running attack in the NFL. Lynch runs very hard and if a defense lets up even once, he can take it the distance. His impressive combination of speed, power, and catching ability makes him a Super Bowl MVP candidate if the Seahawks are able to pull off a victory.

Lastly, you have the one possible X-factor who might be difficult to account for: Percy Harvin. Harvin has barely been able to see the field this year, and when he has, he seems to have the rotten luck of being hit very hard to put him back on the sidelines. His explosiveness is unparalleled, though, and could catch Denver off guard at the right time.

Unlike last year, when I wanted the Ravens to lose badly, me being a Browns fan doesn't have a major influence on my feelings for this game. There are a lot of former Browns players, coaches, or front office people on both teams, though, which you can review here. Personally, my rooting interest is in Peyton Manning, who has always been my favorite player by far, outside of the Browns.

Being on this stage for a third time has to give Manning a big advantage over Wilson. As much as people want to talk about defense in this game, the Broncos' offense is a different beast -- they can make everyone look average in comparison. Seattle is good at home and on the road, but it's clear that their 12th man advantage in Seattle puts them over the edge. Without that factor this week, the Broncos will take care of business in a tight game.

Additionally, I'll take Peyton Manning to be the MVP, and for the pre-game National Anthem to go 2:27.

If you want to make your own prediction, please do so in the DBN Super Bowl XLVIII Pick'em Thread! Go Broncos!