Reviewing whether it is worth it for the Cleveland Browns to retain veteran running back Willis McGahee for one more season.

Over the next few weeks, I will be reviewing all seven of the players on the Cleveland Browns who are free agents. There will be a common format for each one -- brief overviews on how and when the player came to the team, what their production was like, why we could be interested in re-signing them, what we should do, and finally, an open poll for the DBN community. We begin with running back Willis McGahee. 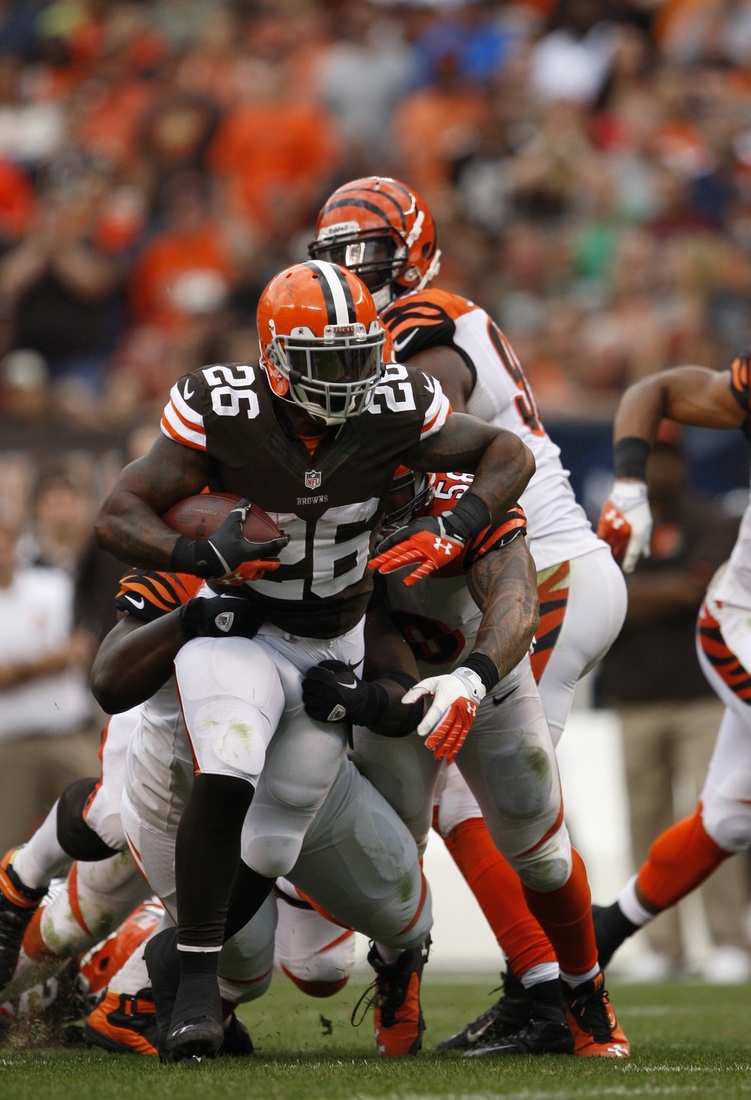 Browns RB Willis McGahee didn't have enough of a burst to get past defenders. Credit: Raj Mehta-USA TODAY Sports

How and When He Joined the Browns: McGahee was the oldest player on the Browns last year. A first-round pick by the Buffalo Bills in 2003, McGahee bounced around to the Baltimore Ravens and then the Denver Broncos. He had a revitalization of his career with the Broncos in 2011, and continued doing well in 2012 with Peyton Manning.

McGahee suffered a significant knee injury near the end of the 2012 season and was released by the Broncos in June 2013. Shortly after the Browns traded Trent Richardson to the Colts heading into the third week of the season last year, the Browns signed McGahee. It has been reported that head coach Rob Chudzinski was the guy who really pushed for the team to bring in the veteran back.

Productivity Level Last Season: It didn't take long for McGahee to start getting carries, and he quickly became the team's starting running back by default -- there was literally nobody else on the roster who had experience carrying the ball.

Unfortunately, the results are not what I had hoped they would be. McGahee had good instincts of where the holes were, but he lacked any form of a burst or the ability to break a tackle. He was finally phased out of action with three weeks left in the season and then suffered a concussion one week later, officially ending his season. He finished the year with 138 carries for 377 yards (2.7 YPC) and 2 touchdowns. He only had 8 catches for 20 yards.

Why Keeping Him Could Make Sense: At this stage of his career, McGahee isn't going to be a sought-after back, meaning he can probably be signed for the veteran minimum. He will have had an entire offseason to try to re-gain some of his burst, as he was resting his knee a lot last season. The Browns could bring him in as a veteran back to help mentor the younger players they have at the position.

What the Browns Should Do: McGahee looked like he had absolutely nothing left in the tank last year, and I don't think we really need a veteran back who isn't going to play on the roster. The team got a better spark from a practice squad player in Edwin Baker, and Fozzy Whittaker was more useful as a receiver. The team will be looking for new backs to fit a zone run blocking scheme, and I don't see that being McGahee.

Now it's your turn -- vote in the poll below on whether or not the team should try to re-sign Willis McGahee!