Reviewing whether it is worth it for the Cleveland Browns to retain strong safety T.J. Ward. We also look at how much money it could cost to keep Ward, either with the franchise tag or under a new contract.

Usually, I do my free agent reviews in order of position (starting with offense, ending with defense), but I am circumventing that order in order to cover SS T.J. Ward. The reason? The team will have to decide very soon (March 3 by 4:00 PM EST) whether to use the franchise tag on him, so a decision about his status needs to be considered before some of our other free agents. The Browns will have the option to re-sign Ward or use the franchise tag on Mack, and we explore both options below. 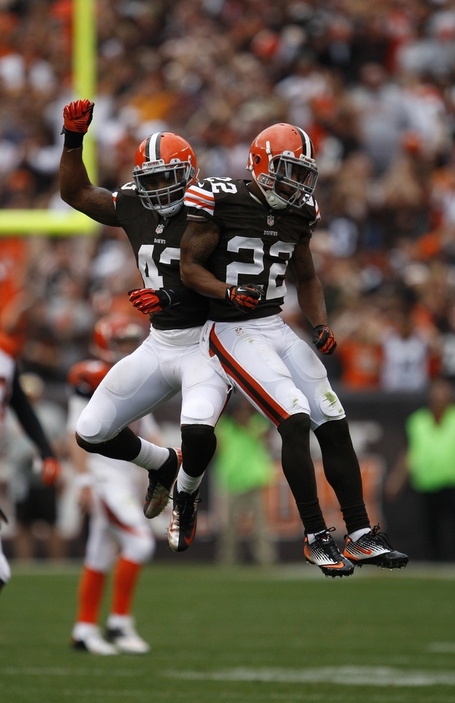 How and When He Joined the Browns: In 2009, the Browns featured Brodney Pool and Abram Elam as their two starting safeties. Pool didn't work out to be the type of safety the team had hoped, and the team did not retain him heading into 2010. Instead, Cleveland drafted Ward in the second round of the draft with the 38th overall pick.

Prior to last season, I always thought that Ward was a pretty good safety, but not one of the "cream of the crop" safeties in the NFL. He did all that he could to change that reputation. He was outstanding against the run when he played near the line of scrimmage, establishing himself as the best run-stopping defensive back in all of football.

Why Keeping Him Could Make Sense: Ward is only getting better. As Pro Football Focus pointed out, "Ward's overall grade has steadily risen in each of his four NFL seasons, and his +14.5 mark in 2013 tied him for third among safeties." The Browns already parted ways with one defensive leader in ILB D'Qwell Jackson, which means both CB Joe Haden and Ward would be looked to as the team's new vocal leaders. Unlike Jackson, Ward is younger and presents a more impressive skill set.

What the Browns Should Do: In the back of Mike Pettine's head, he has to be thinking, "I like Ward, but I'd really like to get Jarius Byrd in Cleveland." To that, I would say that the Browns better "tread lightly." Byrd is probably going to command a larger contract than Ward, and there is a chance that he might sign elsewhere or stay with Buffalo. If the Browns then turn to Ward, it might be too late -- another team will have gobbled him up already at a better price.

The Browns could use the franchise tag on Ward, which would cost $8.433 million in 2014. That is more affordable than what it would be to use it on Mack, and it might offer a one-year stopgap for the team to try to rebuild the safety position in 2015. If both Byrd and Ward get away, we're stuck with Tashaun Gipson, Jordan Poyer, and Jamoris Slaughter at the position. Does that inspire confidence?

While I think Mack will be more difficult to re-sign, my gut-feeling tells me that Ward would be more willing to stay in Cleveland at the right price. While some safeties have received very lucrative deals, Ward is only coming off of a very solid season, not an elite season. In other words, he's not the safety equivalent to Joe Haden -- he's very dependable, and I think that reputation will play into Cleveland's favor. If the Browns re-sign him, my projection is that he will receive $7 million per year. On a 5-year deal, that would be $35 million, with about $17 million guaranteed.

Click here to see salary cap projections if Mack & Ward are both re-signed.

Now it's your turn -- vote in the poll below on whether or not the team should try to re-sign or franchise T.J. Ward!