Share All sharing options for: What Happened to Joe Banner's Old Office?

Even though the draft is ahead of us, the offseason is a time to think about some of the finer details of the organization, even if it's something that might not really matter in the whole grand scheme of things. For example: what happened to Joe Banner's old office? The Browns did not hire a CEO to replace him, and that was some prime real estate that Banner had in Berea: 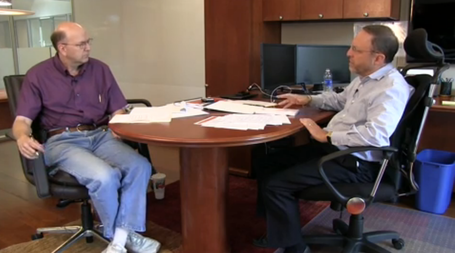 One thing is for certain: whoever moved in, there wouldn't have been much cleaning out to do.

In the transcript provided by Mary Kay Cabot of the Plain Dealer from the interview session with owner Jimmy Haslam last week, the topic of Banner's office came up. The person who score the prime real estate? Head coach Mike Pettine, who wanted to be closer to general manager Ray Farmer:

"They [team president Alex Scheiner, Farmer, and Pettine] are very smart, and here's the most important thing: they work extremely well together and what I really like about these guys is they're driven, they want to win, they don't care who gets the credit. It's all about turning around the Cleveland Browns and that's all we talk about and that's all they talk about and semantics are a small thing, but when Joe (Banner) left the building, Mike Pettine came to me and said, 'what are you going to do with Joe's office?' I said I hadn't thought about it and he said, 'do you mind if I move in there?….that will put me right by Ray, right across from the draft room, right next to you and I'd rather be back there than kind of back in that hole.' You've all been around a lot of football coaches. Most of them like to be back in the hole and I think that shows how important Mike views working with Ray. It's a small thing, but I think it's a big thing."

I agree with Haslam -- it might sound like a small thing, but something as simple as that can help make the unit feel like everybody is on the same page with the same goals in mind. I assume Rob Chudzinski was "stuck in the hole." Speaking of Chudzinski, Haslam was asked if he regretted firing him, and he responded with the following:

"You know I can’t worry about that. Rob’s a quality person. I wish him nothing but the best of luck at Indianapolis, and he’ll have future opportunities."

Reading between the lines, I think the answer is that Haslam is happy to get away from the Joe Banner/Michael Lombardi mess, and that unfortunately, Chudzinski just happened to be the innocent bystander who was caught in the middle.