Reviewing whether it is worth it for the Cleveland Browns to retain offensive guard Shawn Lauvao for another season.

With free agency just a couple of days away, we investigate the prospects of the Cleveland Browns trying to bring OG Shawn Lauvao back for another season. 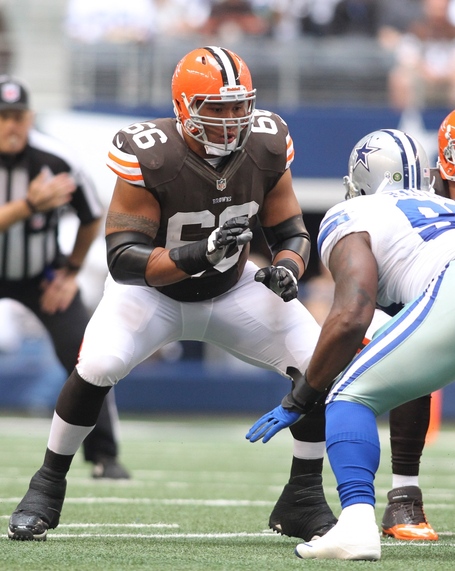 Browns OG Shawn Lauvao has had a lot of starts with the club. Credit: Tim Heitman-USA TODAY Sports

How and When He Joined the Browns: In 2009, the Browns went with a combination of Eric Steinbach and Floyd Womack as their starting offensive guards. Womack was a veteran player who was doing pretty well, but he was getting up there in age.

To add some youth to the line, in the third round (pick No. 92) of the 2010 NFL Draft, the Browns drafted Lauvao. Three picks later, the Saints selected TE Jimmy Graham, who Bernie Kosar reportedly wanted the Browns to draft.

Productivity Level Last Season: Lauvao became a starter in 2011 and didn't miss a game in his first two seasons. After suffering an ankle injury in training camp last year, though, the guard situation was in disarray for Cleveland. Oniel Cousins filled in for Lauvao the first four games of the season. Lauvao's return was good in the sense that Cousins was out of the lineup, but the fourth-year guard failed to take his game to the next level in a contract year.

Why Keeping Him Could Make Sense: If the Browns have other needs, then Lauvao should come cheap: it's hard to imagine any other team really coveting him in free agency. Since becoming the starter in 2011, he started 43 out of 48 games, so he has the experience factor.

What the Browns Should Do: Take a look at what Pro Football Focus said about Lauvao after the season:

Remember when the Browns had to play Oniel Cousins (-16.3)? Sure Shawn Lauvao wasn’t great, but sometimes it’s simply enough not to be that guy.

That pretty much defines Lauvao's career. We treated him as the starter not because he was a great lineman, but rather because anyone else on the roster would have been a disaster. When a guy like that is up for free agency, you look to upgrade the position. The Browns should move on from Lauvao, even as a backup. Between John Greco, Jason Pinkston, and Garrett Gilkey, the Browns already have three guards under contract -- one can start, and the other two can be the backups (or compete for the other starting role).

Now it's your turn -- vote in the poll below on whether or not the team should try to re-sign Shawn Lauvao!