With the 21st pick in the 2014 Dawgs By Nature Community Mock Draft, the Green Bay Packers select...

This selection and write-up was made by Manly and Loving It:

Argh. I can see why GM's go through all that work to prepare for the draft. The three players I was originally eying were taken in the four picks leading up to Green Bay's selection. I saw my dreams of respectability as a pretend GM fading quickly. Luckily, I have a plan D (and cojones). That's right Jimmie, you were my plan D. Remember that. Feed off that knowledge. Let it nourish your desire to get better. Think about it every time you reach for that second-helping of poutiné or whatever the hell they eat in Green Bay, Wisconson.

The Packers are a good football team. They have been for a while. Unfortunately, they have been teetering between good football team and elite NFL football team since winning it all back in 2010. They could stand to upgrade a few positions on the offensive side of the ball, but those positions (C, WR, TE) are perfect positions to address in the middle rounds of the draft. TE is a blatant need after the injury to Jermichael Finley, but there isn't a TE left on the board worthy of taking with the 21st pick. They should be able to find a center prospect later in the draft, and I think they would really benefit from getting a taller receiver to go with the guys they already have in their WR corps. When you have State Farm spokesman All-World QB Aaron Rodgers on your team, I wouldn't look at WR in the first round unless that guy was pretty special, or EVERYONE ELSE TOOK ALL THE GUYS YOU ORIGINALLY WANTED.

Speaking of Pizza Hut enthusiast California-native Aaron Rodgers, man that dude is fun to watch. He is the most entertaining QB in the league. He can pretty much do everything you would want out of an elite quarterback. The guy is awesome. So awesome, he is probably "teaching" your girlfriend how to throw a spiral right now, laughing when it inevitably comes out of her hand like a Phil Dawson kickoff, end-over-end, bouncing half-way between them, then laughing about it as he helps her straighten her bikini top. This same event plays out every single day to Aaron Rodgers in the offseason, when he takes time off from being the most likable franchise QB in the NFL. 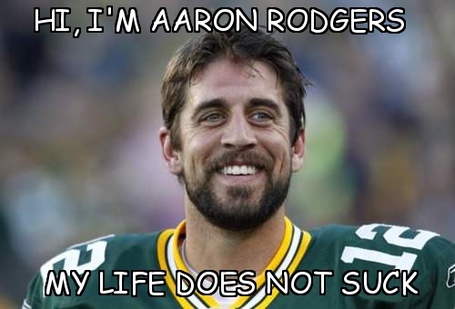 The Green Bay defense, however, they cannot do everything. Namely, they were not able to put an NFL-caliber safety on the field last year.  The two safeties that started the vast majority of games for the Packers last year (Morgan Burnett and M.D. Jennings) finished 2013 with 0 interceptions and 0 forced fumbles. That's terrible for one safety, forget about two. They registered 5 defended passes all season, all by Burnett. Jennings was particularly rotten, allowing 184 yards and 5 TD receptions on just 18 targets. His passer-rating against was 148.8. If you were relying on Burnett or Jennings to do anything other than disappoint, you were in for some serious disappointment. 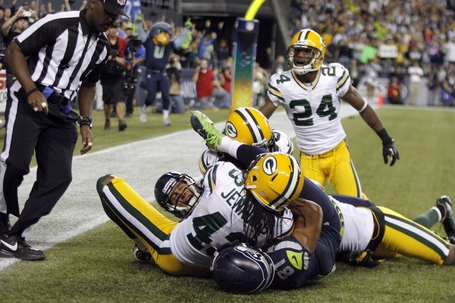 Even when M.D. Jennings does intercept the ball, he doesn't. He's that bad.
Mandatory Credit: Joe Nicholson-USA TODAY Sports

Jimmie Ward is an intriguing prospect, many sites have him rated as a late first rounder and SBNation has him rated as the 26th best player in the draft, while many other sites have his listed as going anywhere from the late 2nd to the 4th or 5th round. Many of the reports that have him rated lower were pre-Senior Bowl, for whatever that's worth (he was apparently impressive). Ward makes plays that jump off the tape, isn't afraid to throw his body around, and is really good in man coverage and on the slot receiver. He is a player that should be able to contribute from Day 1 on a team that is in sore need of anything resembling a play-maker at the position. Dude's got fluid hips they say, but I can't say that out loud without giggling.

The biggest knock on Ward's game that I see is his tackling, while the biggest knock on him in general is his size. Ward is not afraid to throw his body around as I mentioned, but often goes low instead of wrapping up. Could be a product of his size and can hopefully be coached into a more consistent tackler. That's not to say he is a poor tackler, but I'm interested to see if it's a product of size, mentality, or sloppy technique that can be cleaned up at the next level (although supposedly NFL coaches don't coach the fundamentals as much as one would think). He is undersized at 5'10", 190 lbs, but his versatility, playmaking ability, quickness, and instincts make him a player that should be able to come in and start at free-safety right away in Green Bay.

If the Packers were to make Jimmie Ward their first-round selection, I would expect him to start in 2014 and have an up-and-down season. He will make you some plays, but he will likely make his fair share of rookie mistakes. He makes some hits that would likely be penalized at the next level, but again he is overall a solid-tackler. Ward is not a prospect you say is a sure-fire All-Pro one day, but believe me when I say that he is leaps and bounds ahead of what they had in 2013.  I think Ward is worth the pick, especially considering the need in Green Bay. Some people will call this choice a reach, and to them I say, "I know you are, but what am I."

How can I possibly go against a well-defended argument like that? The Packers would be in a bit of a tough situation here after inside linebackers get drafted back-to-back in front of them, and I agree that a tight end might not be worth it here. Either way, the NFL feels the Packers are still good enough to compete for a championship, as they play the opening game of the season against the Seahawks.

The Philadelphia Eagles are up next, led by Ted Washington's Belly.