Press Man, the Threat of Pressure, and Justin Gilbert

Share All sharing options for: Press Man, the Threat of Pressure, and Justin Gilbert

Mike Pettine's first words to Justin Gilbert after drafting him were "are you ready to play some press man?" As a fan of aggressive defense, perhaps nothing excites me more than hearing that we are going to play a lot of man coverage.

Pettine's philosophy in passing situations is to try conceal his pass rush from the offense. He wants to extend the amount of time that quarterbacks need to figure the defense out, buying his pass rushers time to get to their target. In a recent (fantastic) article by Robert Mays at Grantland, Pettine goes into some detail:

"When you have guys that are hybrid types, are they rushers, are they droppers? On two out of three plays, they might drop, and all of a sudden, on the third play, they become a more conventional rusher. You can still bring four rushers, but it's an unconventional four [....] We look for creative ways to keep the back in without sacrificing a lot of coverage," Pettine says. "We feel with these types of players, we're allowed to do that." Last year, only the Jets (Pettine's former team) saw fewer passes to running backs than Buffalo. Only the Seahawks were more effective at defending them.

Pettine is seeking the holy grail of blitzes: dropping many players into coverage while still getting an untouched rusher to the quarterback. When the defense can rush 4, 3, or even 2 players and still accomplish pressures, hits, and sacks on the quarterback they are in great shape. If they can rush four and still force the offense to keep extra blockers in that's not bad either. But to accomplish this, the defense must create confusion and they must create the threat of the blitz.

At it's core, football is a game of arithmetic in space. Can I get two receivers in an area where there is only one zone defender to cover them? If so, I can win. Can I get three blockers and my ballcarrier at the point of attack where you only have three defenders? If so I can win. Likewise, if the offense has five blockers and the defense chooses to rush five, the offense should have enough to block the defense. That "should" is exactly where Pettine operates. 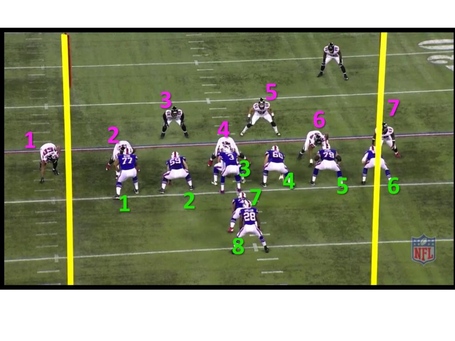 If the offense can identify which defenders are "droppers" and which are rushers they have a much easier time solidifying that "should." Take a traditional 4-3 for instance, where all four linemen are likely rushing the passer. 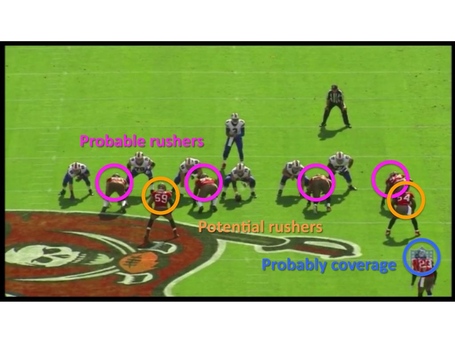 If the offensive line blocks those 4 they are likely to buy their quarterback enough time to deliver the ball. The offense can send it's backs and TEs out into the pass pattern with confidence knowing that they have enough blockers and knowing who to block.

When the defense creates an unclear picture for the quarterback, the offense has a choice to make. The safest plan is to keep extra players in for protection. But in doing so the defense wins a small battle: for every player the offense keeps in to block the defense has to cover 20% less people. That's the equivalent of having one "lockdown" defender for every extra blocker that the offense needs to keep on hand.

Offenses can safely keep fewer players in for protection than the defense has potential rushers if they can identify who is actually rushing. Pettine likes to destroy that identification process for the offense with his "unconventional four." With four rushers, arithmetic works for the offense: they should be able to block the rush. But if the offense turns an unblocked rusher loose or keeps extra players in for protection Pettine wins. Either response to confusion results in good things for the Browns.

Establishing the Threat of an All Out Blitz

A defense can always bring one more rusher than the offense has blockers: regardless of who stays in to block the defense is always +1 rusher if it wants to be. When an offense goes "empty" Pettine isn't afraid to make them pay by sending that extra rusher. When teams go "empty" Mike Pettine will get after them and it doesn't matter which quarterback he's facing.

Though in his quote above Pettine speaks of "not having to sacrifice coverage" he isn't afraid to play press man, and he isn't afraid of an all out blitz leaving his coverage defenders in pure man to man (aka Cover 0). And really, the key to creating a viable threat is to actually go to an all out blitz from time to time. It's never truly a threat if no one believes you.

Against the New Orleans Saints and Drew Brees, Pettine knew he would likely see some empty backfield sets and he wants to punish the Saints for getting all five receivers into the pattern. Below, you'll see the Saints motion Darren Sproles out wide, at which point Buffalo checks to their all out blitz: 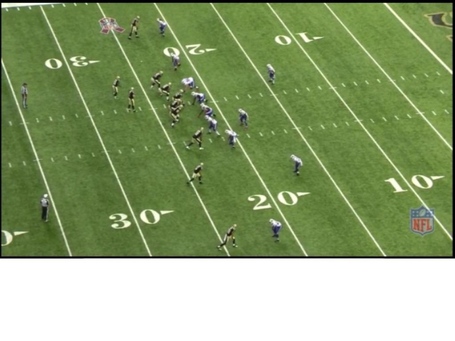 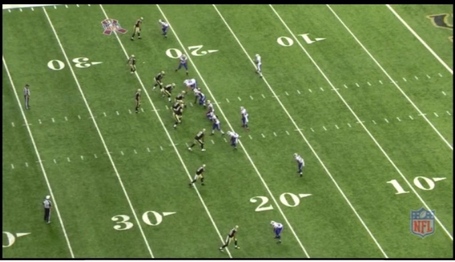 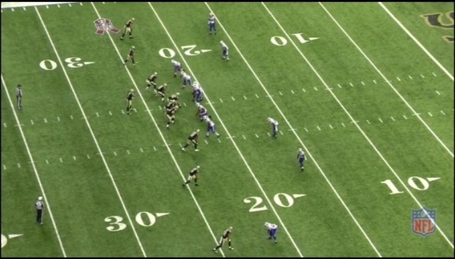 The resulting look is pretty clear for Brees: no safeties deep and one coverage defender lined up over each eligible receiver. This is a pre-snap Cover-0 look (man to man coverage with no safeties deep for help). Sure enough it is an all out blitz. It almost gets to Brees, but he has enough time to find Sproles (who is covered by a safety): 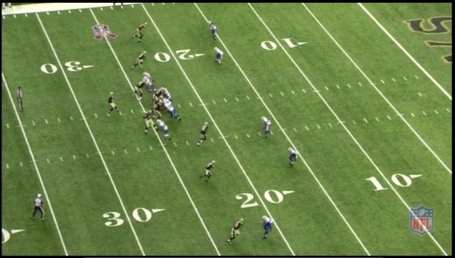 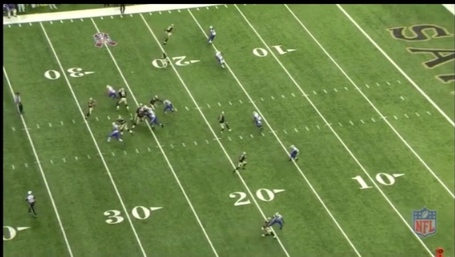 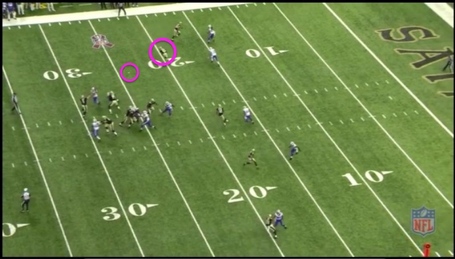 Looking at the endzone angle gives us a few interesting details. First, note that Pettine has a safety lined up in the A gap, with Jerry Hughes and Kiko Alonso along the front who are all potential "droppers." You might be able to throw 295lb Mario Williams in that group as well. 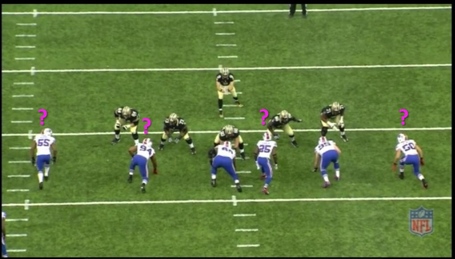 Next, you can see that the Saints slide their protection to the offense's right, turning Alonso loose. They have five blockers against six rushers, and a common tactic for offenses in that situation is to block the interior rush, making the defense take a wider (longer) path to the QB. 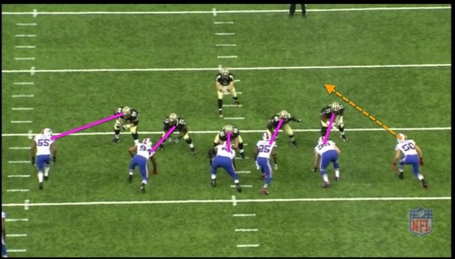 The Saints' left tackle is stout enough that he can hold his ground against DT Kyle Williams, forcing this path to be even wider. Williams gets caught up in winning the one on one battle, attempting to get low and drive the LT back. His legs actually get in Alonso's way, slowing him down just enough to allow Brees to deliver the pass. 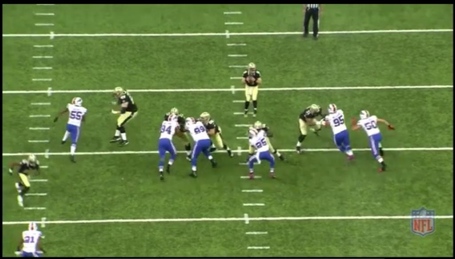 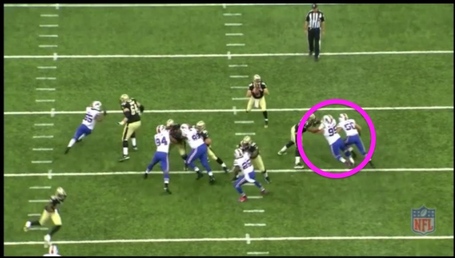 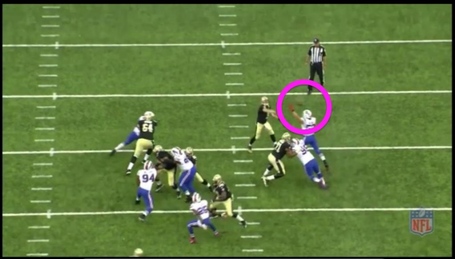 Make no mistake about it, playing Man-0 is very risky because one small mis-step can result in a touchdown. With a tandem of corners like Justin Gilbert and Joe Haden outside, Pettine can feel confident going to these looks occasionally because he knows he can trust his corners. But he only needs to do it enough to establish a credible threat.

Capitalizing on the Threat of Pressure

Against the Atlanta Falcons and Matt Ryan, Pettine again sees a running back leave the backfield to become a wide receiver. Stephen Jackson is lined up in the slot to the bottom of the screen. Again the Bills go to a Cover-0 look. 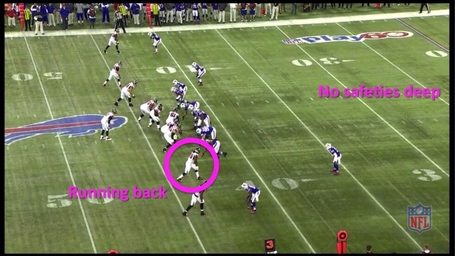 Only this time, most of the rushers bail out. Pettine only sends two after the quarterback. With five blockers, the Falcons should have more than enough blockers. 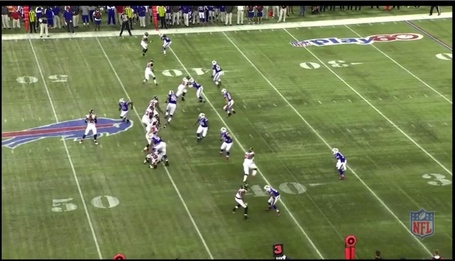 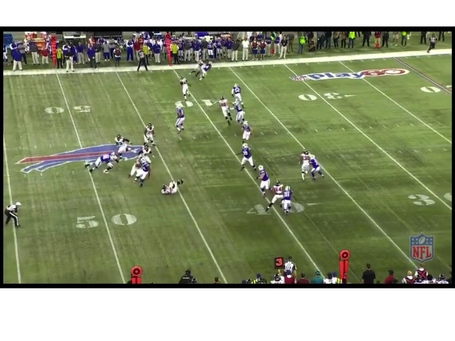 If this were an all out blitz, the offense would try to respond by having its quarterback hit a quick pass to a receiver running a route favorable for beating man to man coverage. But with a bunch of 300lb men in the way, Ryan doesn't have an open hot route. And because the threat of the all out, Man-0 blitz was believable, the Falcons guessed who to block and they guessed wrong. Pettine hit the holy grail of dropping 9 into coverage and still getting his untouched rusher to the QB. 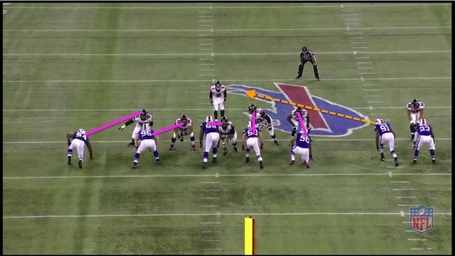 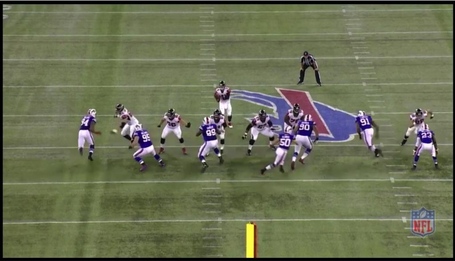 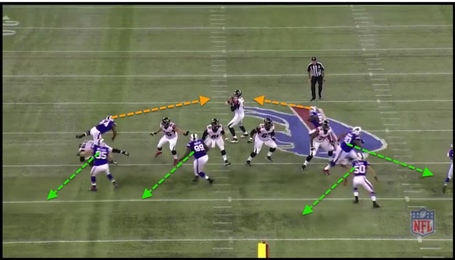 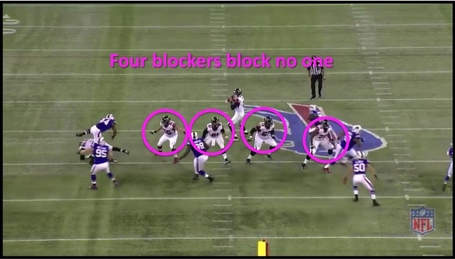 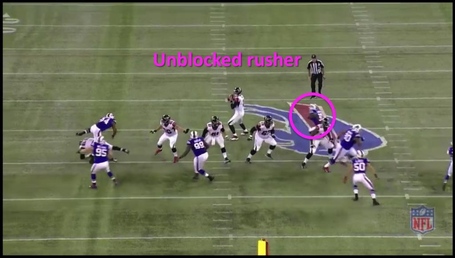 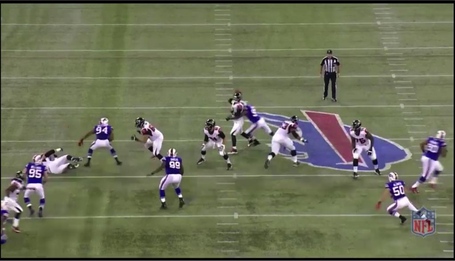 Are you ready to play some press man?