Let's figure out which draft spot gives you the most bang for your buck.

Trades are one of the most exciting parts of the draft. Teams try desperately to out-smart each other, all in the in the name of getting the right player at the right pick. This balancing act is difficult, and can be something of a black box to fans. Things were simplified somewhat by the last CBA and the introduction of the rookie wage scale. Now we know exactly how much money each pick costs. But is that the same as how valuable it is? I don't think so. I think you need to consider both the cost and the expected return. I want to know which pick in the first round will give me the best return for my dollar.

We know how much cash each draft pick is going to cost us. Now we need to figure out what we should expect in return. Most people are familiar with Jimmy Johnson's trade chart from the early 90s. This has long been publicly available and is a favorite of forum GMs everywhere. There's a problem though. As far as anyone can tell, this chart is completely arbitrary. It isn't based on any sort of hard data, just Jimmy Johnson's opinion. That's pretty unsatisfying to me. Luckily, I'm not the only one who felt that way, and lots of people have come up with their own systems over the years. For this study, I'll be using three draft charts: one created by Chase Stuart at Pro-Football-Reference, one created by Kevin Meers at the Harvard Sports Analysis Collective, and Johnson's. All salary data was taken from Over the Cap.

Let's start with the PFR chart. The methodology behind this chart is fairly simple. PFR has a metric called Approximate Value (AV), which is a catch-all number meant to describe how good a player is, similar to WAR in baseball. I won't get into the details, but it's a pretty good way to compare large sets of players over long time periods. In order to make the draft chart, Stuart looked at every draft from 1970 to 1999, assigned each players total AV to their draft spot, and then took the average AV at each spot. There were some bumps in the data, so he fit a logarithmic function to his results in order to come up with the final chart. To see how this compared to Johnson's chart, check out this plot from the PFR article linked above, where blue is Johnson's system and red is the new one: 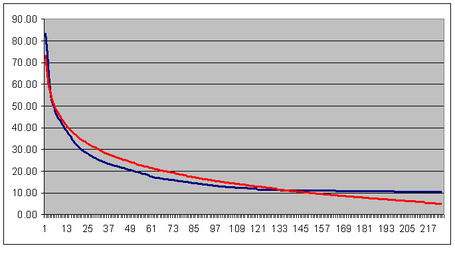 According to this chart, Johnson way over-values the first few picks, undervalues picks from about 5-130, and then overvalues later picks. When I first saw this, I was actually surprised it was this close. But I still feel a lot better using the PFR chart, since it's actually based in reality.

The other new chart we'll be looking at is similar to the PFR chart. Meers also uses AV to assign value to picks, but there are some wrinkles. First, the sample goes from 1980-2005, so it's possible a couple players could still be in the league accumulating AV, but there likely wouldn't be enough to throw off the overall trend. Second, each pick was divided by the average of all picks, resulting in each pick being expressed as a percent above or below average. In the end, this makes for a chart that's awfully similar to the PFR chart, but expressing things this way provides some context to the raw AV used before. Here's the comparison of Meers' work with Johnson's, from the article linked above: 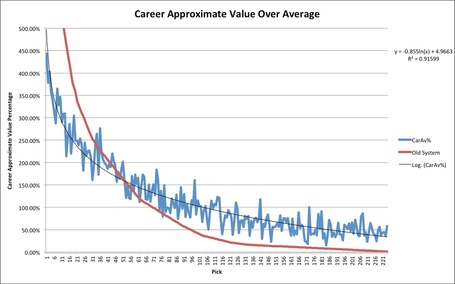 Now let's get down to business. We've got some more scientific ways to determine the expected return of a draft pick, let's look at how that lines up with the cost. First I normalized each value chart using the first overall pick. This means each scale varies between zero and one. Doing this allows me to plot price/value for each system on the same axis. It is extremely important to note, however, that you should not compare price/value between the three systems this way. After normalizing the value of the top pick is always 1.0, but obviously the systems put different values on that pick, so their real price/value would be different. All I care about here is the trend though, I'm just looking for where the local min or max occurs. After normalization, I divided the cost of the pick by the value times 10000 to give me my final price/value. That multiplication is just there to make the numbers easier to read, it doesn't affect the results. Hopefully that all made sense. If not, maybe it will after you get a look at the data: 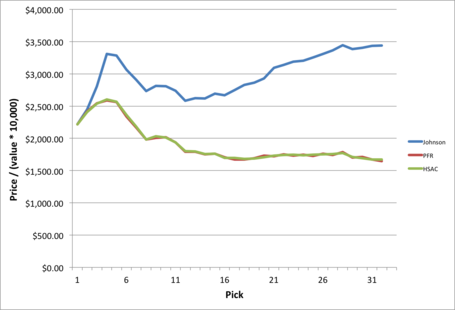 As expected, PFR and HSAC look almost exactly the same, with the fluctuations likely being due to the sample size. I think what jumps out here is just how different Johnson's system actually is. Its general trend is the complete opposite of the new systems. According to Johnson, picks get less efficient as the first round goes on. On the flip side of that, PFR and HSAC say that picks 8-32 are more efficient than the top eight.

Speaking of that top eight, something really interesting is going on there. Both models have a peak within the top eight picks, a spot where you're getting the worst return for your dollar. Anyone want to hazard a guess where that peak is? That's right, it's pick number four. Your Cleveland Browns have the good fortune to be picking in the least efficient spot in the whole first round. While that may sound depressing, it's important to remember that we're talking general trends here. Each draft is different, and before you look at this and start clamoring for a trade up or down, remember that sometimes it is necessary to spend inefficiently in order to improve the team. If drafting were solely about taking the best player available, you could make a solid case for moving into a more efficient spot. However, need has to factor in somewhere. For example, if you're targeting a player at a specific position, it might not be wise to move back to pick eight just for a more cost effective pick. If the player you wanted got taken at pick seven, the money you saved probably wouldn't be a great consolation.

So what do you think Browns fans? Have I convinced you to leave Jimmy Johnson and the early 90s behind? I hope at the very least I've inspired you to reconsider what a draft pick might actually be worth.