Fan Perception: What We Learned About the Browns' Running Backs Heading Into Training Camp

Share All sharing options for: Fan Perception: What We Learned About the Browns' Running Backs Heading Into Training Camp

In each of our training camp previews, we conduct a poll at the end of the post. The polls are intended to gauge fan perception about certain players or roles on the Cleveland Browns heading into training camp. They help set the initial expectations that fans have on certain players. Here is a summary of each of those polls for the running back/fullback position:

How do you see the Browns' running back situation most likely playing out this season? 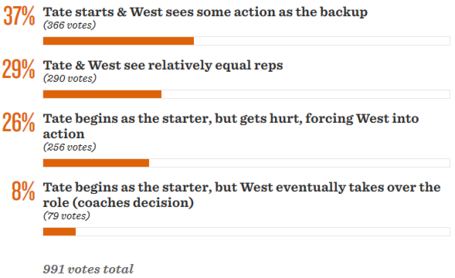 Very few fans believe that RB Terrance West will naturally take over the starting role from RB Ben Tate, but the other three categories drew close results. The top-voted selection saw 37% of fans believing that Tate will start the whole season, with West simply being the backup running back. 29% of fans believe the Browns will have the two running backs split reps on a pretty even workload.

I fell into the category not yet mentioned -- the one in which 26% of fans think that Tate will begin the season as the starter, but that an injury will force West into the starting role. In that scenario, Tate might return still, but if West seized the opportunity during his stretch of starts, he is bound to receive an uptick in playing time. [Read Part 1 of the RB Preview]

If only one of the running backs below could make the 53-man roster, who should it be? 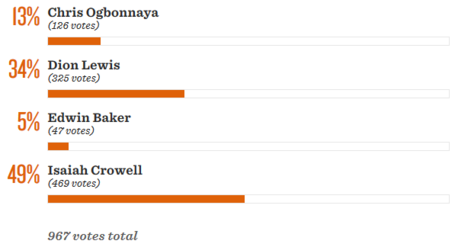 Everyone commented how tough of a poll this was, and I think the reason why is because fans would ideally like the option to keep four running backs on the team. This hypothetical scenario only permits three running backs total.

The leading vote-getter with nearly half of the votes is Isaiah Crowell. It would be a nice little fantasy scenario for an undrafted free agent to be a steal at running back, but my heart was still set on Dion Lewis for the exceptional job he did last offseason. If Lewis can re-capture some of that magic, he offers a different skillset than any of our running backs and could also be the team's kickoff returner.

The 13% support for Ogbonnaya isn't a true indicator of how many fans still think he has a spot on the team, but I also think it is indicative of the fact that fans don't mind moving on from him. Despite the solid late-season effort from Edwin Baker in 2013, his support was pretty much non-existent. [Read Part 2 of the RB Preview]

Who do you think will be the Browns' starting fullback to begin the season? 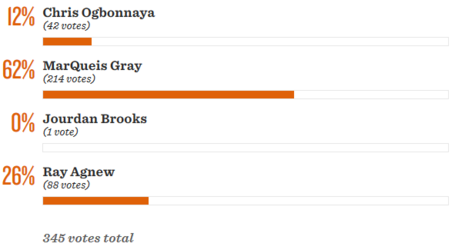 Poor Jourdan Brooks -- only one measly vote. This poll tells me that the majority of fans are intrigued by the athleticism of MarQueis Gray, and that they'd like to see him in the offense in some capacity; if that means calling him a fullback and having him block a few times, then so be it. For being an undrafted free agent, Ray Agnew also garnered a decent amount of support, perhaps because he's more of the traditional blocking fullback, which is appealing to consider. Chris Ogbonnaya didn't get a lot of votes at fullback either.. [Read the FB Preview]