Fan Perception: What We Learned About the Browns' Offensive Line Heading Into Training Camp

Share All sharing options for: Fan Perception: What We Learned About the Browns' Offensive Line Heading Into Training Camp

In each of our training camp previews, we conduct a poll at the end of the post. The polls are intended to gauge fan perception about certain players or roles on the Cleveland Browns heading into training camp. They help set the initial expectations that fans have on certain players. Here is a summary of each of those polls for the offensive line position:

Assuming Joel Bitonio starts at left guard, what type of season do you expect him to have? 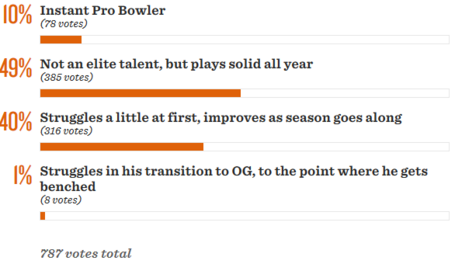 Cross you fingers that Joel Bitonio's high ankle sprain will be completely healed by the start of training camp. It's better that the injury came a few weeks ago as opposed to at the start of camp, because this will be valuable time for Bitonio to develop chemistry with the starting offensive line.

In terms of fan perception, about half of the fans feel that Bitonio won't be an elite talent, but will have a solid rookie season. The majority of the other votes say that he will struggle at first and then improve as the season goes along -- that is the group I fell in to. I won't be disappointed if he struggles a little out of the gate, because I think most offensive linemen require a bit of a learning curve. [Read Part 1 of the OL Preview]

Assuming Joel Bitonio starts at left guard, who do you want to see be the Browns' starting right guard to start 2014? 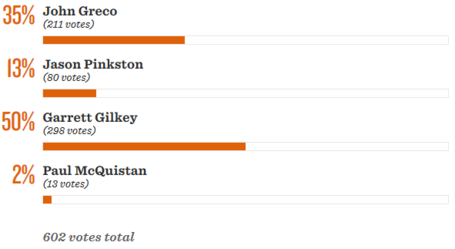 This is a tough vote because I could legitimately see any of these four guys starting. Even Paul McQuistan has a legitimate chance -- after all, he started 40 games over the past three years in the regular season for the Seahawks. Given his terrible rating on Pro Football Focus, though, I'm perfectly fine with McQuistan staying on the bench.

The majority of the votes are split between John Greco and Garrett Gilkey. Gilkey doesn't have the starting experience, but I think fans are intrigued by the unknown and his potential to grow. I went with Greco for my vote. Although I was disappointed by his 2013 season overall, he's lost some weight and has shown those glimpses of being a stable force. [Read Part 2 of the OL Preview]

What are your expectations for OL Chris Faulk this camp? 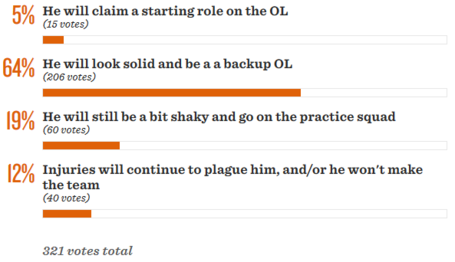 The expectations for a guy who really hasn't played football for two years have been set pretty high -- 64% of the votes have him looking solid and being a backup. My heart wants that to be the case, but I voted that he'll be shaky and go on the practice squad. [Read Part 3 of the OL Preview]

Which of the OL from today's preview are you most intrigued by?

This was the poll in which, heading into it, I had no idea how the results would turn out. It sounds like a lot of people are intrigued by the position change for Keavon Milton, perhaps with the possibility of using him as an "eligible receiver" down near the goal line. I voted for Randall Harris, just because of the Terrance West connection. [Read Part 4 of the OL Preview]