Browns are the Most Google-Searched Team in Ohio

Share All sharing options for: Browns are the Most Google-Searched Team in Ohio

Browns fans are often accused of being many things: crazy, desperate and less than sober. But you can't question their devotion. New data now supports the fact that Browns fans are loyal.

TicketCity recently compiled Google search data from the past two years to determine the most popular sports team from each state. The data included each team from the NFL, MLB, NBA, NHL and the 125 Division I FBS schools, for a total of 247 teams. 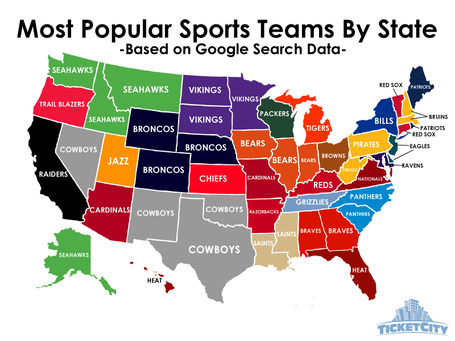 TicketCity's findings shouldn't be too surprising, at least on a local scale.  While the Indians and the Cavs have enjoyed more success since 1999, Cleveland is a "Browns Town." Other Cleveland sports blogs have debated why this is, but the fact remains that football is more popular in Cleveland.

Looking at the state as a whole, the result is a bit more surprising. According to Census.gov, Columbus's population of 822,553 dwarfs Cleveland's 390,113 (Cincinnati only has 297,517 residents). Solely based on this figure, and Columbus' love for all things Ohio State, the Buckeyes should beat the Browns in popularity.

However, if you look closely at the map, only one state (Arkansas) has a college program as its most popular team. The NFL is much more prominent. In 32 of the 50 states, an NFL team ranks first in Google searches. A variety of factors are at play here, but I don't want to get into the "college vs. pro" debate here.

Looking just at the six Ohio teams in the NFL, MLB, NBA and NHL, the Browns' popularity is understandable. No Ohio team from the four major sports has won a championship since 1990, when the Reds swept the A's in the World Series. Without a winner to cheer for, which team is the most lovable loser? Answer: The Browns.

As a whole, this data is interesting, but this is not the first time that data has been used to measure popularity.

Early in 2008, CBS Sports conducted a survey of 40,000 people in the United States to discover the most popular sport and team by state. The NFL earned the title of most popular league in Ohio, while the Browns took the cake as the state's favorite team. The Browns' near playoff appearance in 2007 might have had something to do with that, but the Indians actually did reach the playoffs before losing to the Red Sox in dramatic fashion in the American League Championship Series.

Nate Silver conducted a study similar to TicketCity's, using Google searches in an April article at FiveThirtyEight. Silver's study has a few major differences, but has the same general idea. His data excluded college teams, but did include the MLS, CFL and Liga MX (Mexico's top pro soccer league). Also, Google searches were not limited to the United States. Surprisingly, the Indians barely beat the Browns in the number of Google searches. According to Silver's data, the Bengals narrowly edged the Tribe as the most Google-searched team from Ohio.