Fan Perception: What We Learned About the Browns' Wide Receivers Heading Into Training Camp

Share All sharing options for: Fan Perception: What We Learned About the Browns' Wide Receivers Heading Into Training Camp

In each of our training camp previews, we conduct a poll at the end of the post. The polls are intended to gauge fan perception about certain players or roles on the Cleveland Browns heading into training camp. They help set the initial expectations that fans have on certain players. Here is a summary of each of those polls for the wide receiver position:

Scenario: Josh Gordon is not available, and the Browns' top three WRs (in no particular order) are Andrew Hawkins, Nate Burleson, and Miles Austin. Who should be the outside receivers, and who should be the slot?

This wasn't too surprising of a result, as Andrew Hawkins will be a nightmare out of the slot on third downs. Whoever is defending him won't be able to get a jam, and he is so quick that more times than not, the defender will be a step too slow to react to him. Then, it'll just be up to the quarterback to get him the ball. Now, if the Browns only have a two-receiver set, does Hawkins still see the field as an outside receiver? [Read Part 1 of the WR Preview]

Which of these players will have the biggest impact at WR this season? (Note: do NOT factor in punt returns) 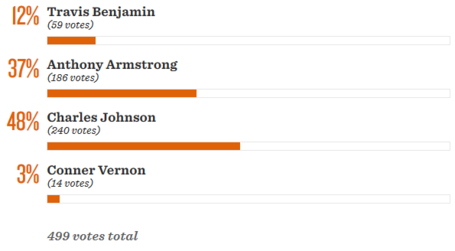 I personally voted for Anthony Armstrong, but I was still surprised to see him get so many more votes than Travis Benjamin. I have to wonder if Benjamin's low vote total is a lack of confidence that he'll get a full camp under his belt (due to the ACL injury), or because he hasn't done much at receiver over his first two years. Charles Johnson was the leading vote-getter, despite not having played a single snap in the NFL. [Read Part 2 of the WR Preview]

Which of the Browns' undrafted free agent WRs are you most excited about? 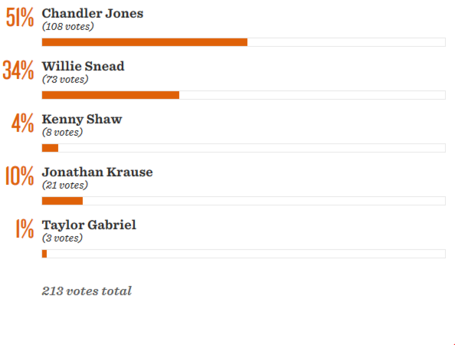 Chandler Jones was the closest player to being drafted among the undrafted free agents, so seeing him with the majority of the votes isn't a surprise. Jonathan Krause got a few votes due to the Vanderbilt connection, but I expected his total to be a tad higher. Instead, Willie Snead got those votes. [Read Part 3 of the WR Preview]