Fan Perception: What We Learned About the Browns' Tight Ends Heading Into Training Camp

Share All sharing options for: Fan Perception: What We Learned About the Browns' Tight Ends Heading Into Training Camp

In each of our training camp previews, we conduct a poll at the end of the post. The polls are intended to gauge fan perception about certain players or roles on the Cleveland Browns heading into training camp. They help set the initial expectations that fans have on certain players. Here is a summary of each of those polls for the tight end position:

How do you think the reps will be split up among the backup tight ends this year? 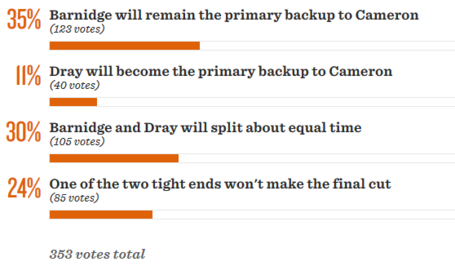 This was one of the most divided training camp polls yet. 35% of the votes still went with TE Gary Barnidge being the primary backup to TE Jordan Cameron, but 30% of the votes went to both Barnidge and TE Jim Dray having equal playing time (this was my vote). 24% of the votes say that one of the two tight ends won't make the final cut. If that happens, it'll likely be Barnidge getting cut since Dray signed a three-year deal this offseason with some guaranteed money. [Read Part 1 of the TE Preview]

The Browns have 53 roster spots. How many of them should they use on fullbacks+tight ends combined? 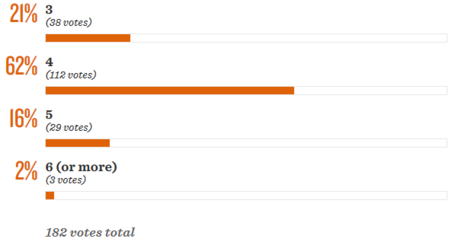 Don't forget that at the end of last season, the Browns had Jordan Cameron, Gary Barnidge, MarQueis Gray, Keavon Milton, Andre Smith, and Chris Ogbonnaya all on the 53-man roster. They had 6 fullbacks+tight ends combined. Yikes. It's not a surprise to see "4" as the leading vote-getter here, as conventional wisdom says that your top three tight ends contribute, and you also have one fullback. [Read Part 2 of the TE Preview]