Fan Perception: What We Learned About the Browns' Linebackers Heading Into Training Camp

Share All sharing options for: Fan Perception: What We Learned About the Browns' Linebackers Heading Into Training Camp

In each of our training camp previews, we conduct a poll at the end of the post. The polls are intended to gauge fan perception about certain players or roles on the Cleveland Browns heading into training camp. They help set the initial expectations that fans have on certain players. Here is a summary of each of those polls for the linebacker position:

Which OLB will have the most sacks for the Browns in 2014?

It looks like fans have bought into the Mario Williams hype surrounding Jabaal Sheard. By the sounds of things, the Browns would like to extend his contract, so that would lead you to believe that the new defensive coaching staff likes what they see in him. Paul Kruger got very little support after a lackluster year. I thought Barkevious Mingo would have a larger share of the votes, but Sheard is still the safer bet due to the playing time he'll receive. [Read Part 1 of the OLB Preview]

Assuming Armonty Bryant stays on the DL, who will be the Browns' fourth outside linebacker this year? 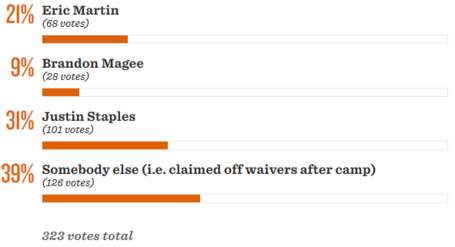 When the leading vote-getter is "somebody else," it's clear that fans don't have high expectations for the guys competing for a backup spot at outside linebacker. Justin Staples probably only got the votes he did because he's from Lakewood, OH. [Read Part 2 of the OLB Preview]

Who will start alongside Karlos Dansby at ILB in Week 1?

This poll tells you just how sick and tired people were of seeing ILB Craig Robertson getting burned in coverage last year. We really have very little knowledge as to how Chris Kirksey will play, but the feeling is that "the alternative" is better than what Robertson offered in 2013. [Read Part 1 of the ILB Preview]

Which of these three players will make the biggest contribution this season at ILB?

I think my write-up about Darius Eubanks tipped the vote in his favor. It makes sense -- Zac Diles hasn't been a contributor for years, and Tank Carder has been a special teams guy. Meanwhile, Eubanks has the coverage skills and the potential factor on his side. [Read Part 2 of the ILB Preview]